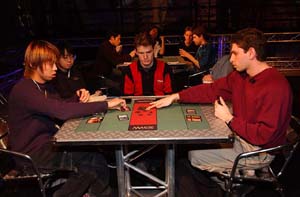 Wolfman wanted to confirm that he won the flip and looked to Rune Horvik for confirmation, "So I will play first?"

"You will choose to play or draw," said Rune, laying down the law early.

"I will choose to play first," said a properly contrite Wolfman.

Wolfman kept a two Plains hand and did not see a third land until after Mori had Laid Waste to one of his lands. When he finally got back to three lands a Shaleskin Plower razed another one. By the time Wolfman got some creatures into play a Covert Operative and a Clickslither finished him off. 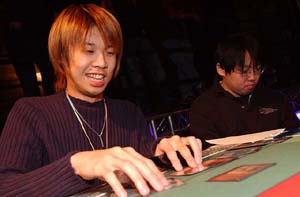 Wolfman sided out an Anurid Murkdiver in favor of a Spined Basher.

This game went much better for Wolfman as he was able to make a 4/4 Brawler on the third turn. Mori did little more than play morphs to clog up the ground. Dirge of Dread allowed Wolfman to break the stalemate with fatal results for the Converse-clad Mori.

Mori went first but Wolfman got ahead on the morph front with a 2/2 Withered Wretch. He could have held off a turn to amplify the Embalmed Brawler but chose to play it as a Grey Ogre next turn. Mori wrecked him when his third turn morph attacked into the Brawler. Wolfman intended to trade but Mori had other plans. With damage on the stack he unmorphed Skirk Marauder to kill the Wretch. Wolfman was anxious to let damage resolve but Mori had another trick up his sleeve and Chain of Vapored the goblin back to his own grip.

Wolfman played an Aven Redeemer and Mori came back with Glintwing Invoker. Wolfman paid no heed to the Marauder in hand and swung his Redeemer in for 2 points in the air. Mori used six mana to kill the healer and attacked for 3. 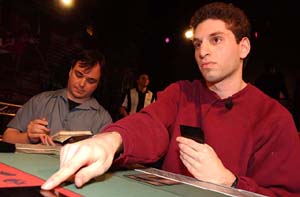 Clickslither took Wolfman to 11 on the next turn and he played out Gravel Slinger and Grassland Crusader over his next turns. Skirk Commando face-up made blocking the Clickslither problematic and Wolfman slid to 8. Fleeting Aven fortified the air force but Wolfman Swatted it and played a morph. Aven Fateshaper threatened to make short work of Wolfman but he ripped a Celestial Gatekeeper with Aven redeemer and Withered Wretch in the bin. He didn't realize that Gatekeeper put them directly into play and was in better shape—or not quite as bad shape—than he originally thought.

He had cycled his Dirge of Dread earlier and had no way to break though unless Mori over-committed on an attack. Mori made sure he could never fall below one and it was up to Elijah to carry the team to victory.