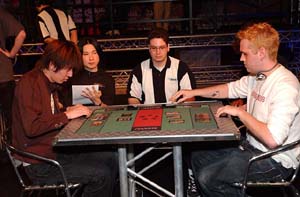 Elijah Pollock likes to project an easygoing attitude. He's certainly friendly to everyone he meets and rarely gets broken up about a loss. Even after 2020 got beaten in the finals of Pro Tour – Boston, he was wearing his usual grin. Now, though, once again so close to a big title, he's a little nervous. Not so for Masahiko Morita. He's been through four Japanese Grand Prix finals and has grown used to the sting of defeat. Which isn't to say that he's not excited to be here. He'd like nothing better than to have a Japanese team win the Masters. His hair drooped over his face, hiding his quick, observant eyes. Pollock's fast red-green deck is thought to be 2020's best, but Morita's black-green has more than his fair share of beats. If the game goes long, Pollock will need to pull a falter before Morita's fat overwhelms him.

Pollock looked at a hand of two forests, expensive green spells and one morph. He wasted no time sending it back. His next had more appropriate mana and some early beaters. He kept. He fired out Gempalm Strider and Flamewave Invoker before Morita's third turn. Morita had no play, and Pollock went for the jugular, spilling out Skirk Drill Sergeant and Wirewood Herald. Morita's only play was Wirewood Channeller.

Pollock started to do some calculations concerning Morita's possibilities. He turned all his men and Morita opted not to block. Pollock double-checked, and then played Goblin Grappler. He had a forest and three mountains in play to go with Barkhide Mauler in hand. He gave it back to Morita.

Morita untapped and did some figuring of his own. Channeler helped bust out Noxious Ghoul to kill half Pollock's team. Pollock searched for Wirewood Savage, then tried the Drill Sergeant's ability, but just removed Wave of Indifference. Morita had the Wretched Anurid to follow-up, and now Pollock's board was erased, and he was facing two Hill Giants.

Still, Morita was at seven with Wretched Anurid in play. Pollock drew a fifth land and dropped Wirewood Savage, expecting to kill Morita with pain. Morita smashed for six and showed him the error of his ways when he dropped Totem Speaker. To make matters worse, Pollock drew another Barkhide Mauler, so he had to give Morita some life or he'd be overrun. Death Pulse knocked it out of the way, and Pollock took another nine, leaving him at five. Morita went for the throat with a second Anurid. Pollock had no solution to twelve power of creatures.

Things were looking bad for Pollock early in Game 2. He had gambled on a two-forest hand and stalled on his third turn. Morita meanwhile had a Wretched Anurid, Nantuko Husk opener. Pollock ate three, then ripped a mountain. Flamewave Invoker stepped up to bat. Morita matched it with Smokespew, then served with Husk and Anurid. The Invokers wound up trading, indirectly. 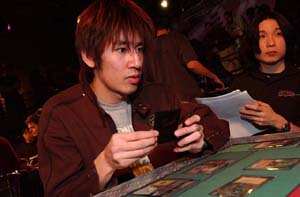 Then, another mountain from the top of Pollock's deck. He planted Skirk Drill Sergeant and Sparksmith. Morita dropped Wirewood Savage and then swung in. He traded the Husk for the Sergeant. Pollock untapped and dropped Goblin Grappler, shooting the Savage and replacing it with one of his own. Morita hit for another three and played Screeching Buzzard. Pollock worked his life total, shooting down the Buzzard and discarding his sideboarded Thunder of Hooves (tech!), then played Elvish Warrior. It looked like he was stabilizing.

Morita's Anurid swung in again, and this time Pollock chumped with the Grappler. Glowering Rogon hit the table as a 6/6, showing Symbiotic Beast and Krosan Vorine while handing Pollock land number six to go with the Searing Flesh already in hand. The Crown of Fury rip that followed was excellent, effectively giving him six power in first-striking elves.

Morita thought hard. He swung in with the Anurid and Pollock blocked with his Crowned Warrior. Morita had no trick. He dropped Symbiotic Beast and hoped. Unfortunately, it had given Pollock land number seven, so they were on to Game 3.

While shuffling up for Game 3 the news came back from the Mori-Wolfman match: Mori had won. David Rood and Masashiro Kuroda were in their third game, so the Canadians had their backs against the wall. Pollock's tension was evident. If Morita felt any, he hid it well.

Morita had a great opener of Elvish Warrior followed by Wretched Anurid. Pollock was slow out of the gates, but his men were excellent: Sparksmith followed by Timberwatch Elf. If he could keep his life total up, he'd be in business. Morita dropped him to thirteen and added Screeching Buzzard. 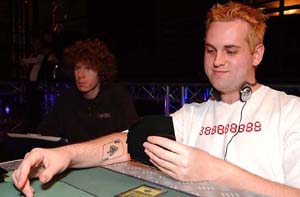 Pollock had all the tools he needed. Goblin Sledder let him shoot down the Buzzard, discarding an excess forest, and Gempalm Strider boosted his defenses and Timberwatch
Elf simultaneously. Morita laid his fifth land and held back. Pollock swung with his Strider, and when it went unblocked, dealt six. He dropped a morph and gave it back to Morita.

Morita was in dire straits. His hand was Death Pulse, Primal Boost, and a fifth forest. He ripped a swamp to shoot down the Timberwatch Elf. Pollock pulled up Skirk Drill Sergeant and thought hard. He shot the Elvish Warrior and swung in with his men. Morita was at just seven life. Pollock was at eight. He put the Anurid in front of the morph. Pollock sacrificed his nonattacking goblins to deal six, leaving Morita at one. Morita drew his card and grimaced. Pollock smiled.

"You have Primal Boost?"

Morita double-checked that he had no outs, then offered the hand, leaving the fate of both teams with the Kuroda-Rood match.