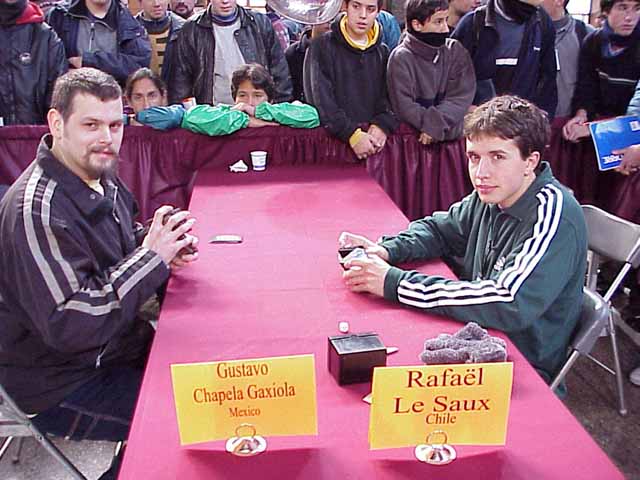 Game one was dominated by Rafaël, who used Counterspells, Miscalculations, Treacheries, and Rewinds to deal with all of Gustavo's relevant threats. Rafaël's Morphling soon came in for twenty points to the head.

Rafaël's feelings of elation dissipated, however, as he quickly ran into trouble in the second game. He cast Thwart to stop a fourth-turn Tangle Wire by returning his only three islands to his hand. He did have a Grim Monolith in play, however, and he used it to play Masticore on the next turn. Gustavo fought back with a Phyrexian Processor, paying six life to assure a 6/6 Minion token every turn.

Rafaël tried to mount a comeback by playing Grim Monolith, Treachery on a Minion token, and then Morphling. However, he didn't actually have enough mana to pull this off, and when Gustavo pointed out the error, Rafaël decided to concede rather than face the wrath of head judge Juan del Compare.

Gustavo started out strong in the third game, playing numerous mana creatures and three Rishadan Ports. His Processor was Annulled when he neglected to tap Rafaël's only untapped island, but Gustavo continued to maintain control of the game by choking off Rafaël's mana supply. A sixth-turn Ancient Hydra forced Rafaël to Thwart by returning three islands to his hand, and this put the final nail in the poor Chilean's coffin. A horde of weenie creatures took him out a few turns later.

The fourth game was a bit anticlimactic as Gustavo had all the threats and Rafaël had none of the right answers. An Avalanche Riders whittled down Rafaël's life total as he tried to recover from a Tangle Wire. By the time Rafaël played Masticore as a blocker, Gustavo had a pair of Deranged Hermits in play. Gustavo smiled and offered his hand as his horde of squirrels attacked for the win. And with that, Gustavo Chapela Gaxiola was declared the champion of Latin America.