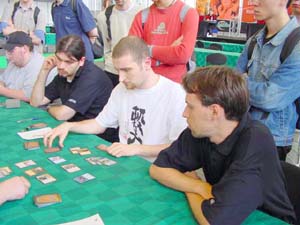 One more match to go. Will it be the multinational Rankko Bongo Wheshiwheshi (Brazil, Argentina, France) or the equally multinational Ace Ten Off (USA, Netherlands)?

Seat B pitted current World Champion Carlos Romao against American legend Jon Finkel. Before Kai there was Finkel and with a couple of recent PT top 8's it seems like the American wants a slice of the pie again.

Game 1 was full of frustration for Finkel. His deck failed to cough up a third land and he ended up discarding Fierce Empath before he finally reached morph mana.

In the meantime Romao was battering him with two morphs. Finkel made a facedown Blistering Firecat, but had to fling it in the way of one of the morphs. Unfortunately it turned out to be a Wall of Deceit.

It wouldn't have mattered as Finkel found out the other morph was a Zombie Cutthroat the hard way when Romao flipped it in order to have a big enough casting cost creature to be able to counter Finkel's Vorine with a Dispersal Shield.

Romao summoned Covert Operative, then drew some cards off Rush of Knowledge and it was pretty much over for Finkel.

At this point Kamiel was 1-0 up and Froehlich 1-0 down to give Rankko Bongo Wheshiwheshi a slight lead.

Game 2 and it was Romao's turn to be screwed. He mulliganed, and then passed turn two without laying any land. Meanwhile Finkel followed a Wirewood Elf with a Timberwatch Elf.

I left to take the pictures I needed of the finals.

It wasn't quite over though. It turned out Finkel was badly flooded as the only other threat he could muster was an Elvish Aberration. Romao came out of the screw with some morphs and Starlight Invoker, but the Timberwatch Elf meant all he could do was throw them in the way of the Aberration. 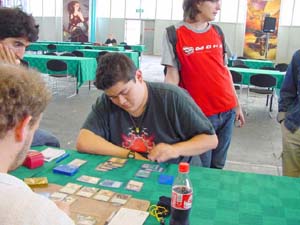 Finkel forced it through and gave it steroids in the form of an Accelerated Mutation. Romao tried to counter it by flipping over an Aven Liberator. Finkel shook his head and after reading the card more carefully Romao scooped.

Romao zipped out of the blocks with a Glory Seeker, enchanting it with Dragon Scales. A Dispersal Shield stopped a Dangerous Skirk Volcanist appearing for Finkel.

The American started to claw back the initiative as a Ridgetop Raptor was followed by Elvish Riders.

The Raptor traded with a Riptide Director and Romao summoned A Dragonstalker.

The next turn was big for the Brazilian. He shut down the Elven Riders with Frozen Solid and brought out a Fresh Glory Seeker.

Finkel stemmed the bleeding on the ground with a Goblin Dynamo, taking another three points from the Dragonstalker to stay at a vulnerable 6 life.

At this time news came through that Barbero had won to leave Ace Ten Off on a knife edge. Finkel needed to pull this match back.

The Dynamo dealt with the Dragonstalker leaving just a Skirk Outrider on defensive duties. Romao found a Deftblade Elite though and the dorky little soldier was able to distract the Outrider and let Romao attack through to take the game, match and title for his team.

Final Result: Rankko Bongo Wheshiwheshi beat Ace Ten Off and are the Champions of GP Amsterdam.