One more match to go to determine the champion of Prague. On the side is the veteran French player Raphael Levy, on the other is the unknown Stefan Jedlicka from Austria. 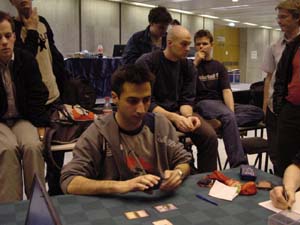 Levy has a good blue-white deck splashing red for Lavamancer's Skills while Jedlicka has a route one red-green deck with quick beats, beasts and burn.

Game 1 started fairly brutally. Jedlicka Vitality Charmed a morph and then unmorphed it to reveal a Skirk Commando taking down two face down Echo Tracers.

Removal wiped out the early guys before a 5/5 Glowering Rogon arrived to stick. Levy's Dive Bomber fell to a Marauder and the Frenchman was looking in trouble with just 4 land.

He found a second Dive Bomber and then dealt with the Rogon with a Pacifism. A Berserk Murlodont arrived out of the woods to keep up the pressure from Jedlicka.

Levy still couldn't find land number 5. He made another morph on defense only to see that crumble when a Blistering Firecat came haring at him. Levy was down to two and needed something good.

The fifth land finally allowed him to drop a Daunting Defender but then Jedlicka unmorphed a Vigilante to kill the Pacifism then swung with all his monsters. Levy stayed alive a turn but couldn't hold back the beasts.

The Firecat had been in the booster Levy had opened and come round to Jedlicka seventh pick.

In Game 2 both players opened with morphs. Jedlicka had only green mana so wasn't overly bothered when facedown Craghorn traded with Disruptive Pitmage.

Levy looked much better this game as he started attacking through the air with a Keeneye Aven and then dropped a Daunting Defender to hold up the ground.

The Vorine didn't seem too much use against the Defender but then a Snapping Thragg appeared to make things interesting. 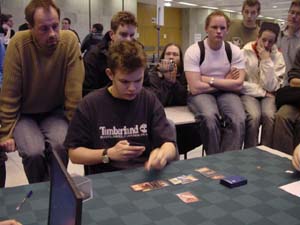 Levy didn't care, a second Defender negated any provoke tricks as he sent both first Defender and Keeneye Aven into the red zone.

A Tribal Unity Suddenly turned the game as the Vorine/Thragg tag team took down a Defender and Aven.

Levy attacked back then dropped a Slipstream Eel as a very large wall for the Austrian to try and bypass. The Thragg/Vorine tag-team dealt with it, but for the cost of the Vorine. Levy kept up the aggression with his Defenders, but he summoned nothing on defense and a Skirk Marauder aided the Thragg in taking down the Defenders.

The Thragg was proving a real headache for Levy. His face down Echo Tracer jumped out of the way of an Erratic Explosion, but Jedlicka was in for five and suddenly Levy was the one in trouble as he dropped below Jedlicka's life total to 4.

The Tracer coming back was irrelevant as Jedlicka sent Erratic Explosion straight to his head. No reprieve for Levy as it hit a 4 cc spell to do exactly enough damage to finish Levy off.