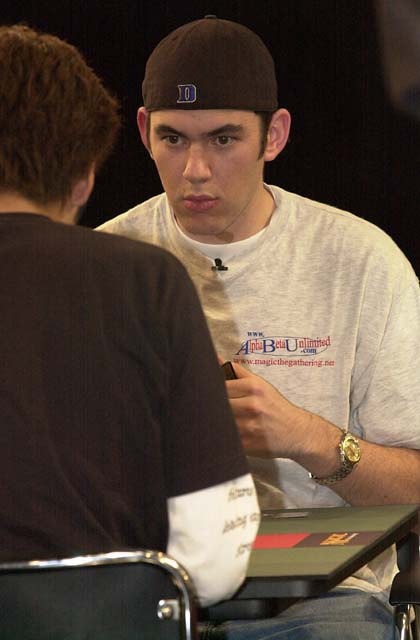 Benafel came into this match straight from playing in the Pro Tour: Tokyo Top 8, and so desperately wanted that this final would be different from his match versus Zvi Mowshowitz. Reiji Ando, a relative Pro Tour rookie with only a single Pro Tour appearance under his belt seemed a little edgy under the harsh lights of the finals stage.

Both players were playing the red/black/blue combination, each with a number of bombs. The ubiquitous Flametongue Kavu, the most popular card in the Pro Tour, was in Benafel's deck, but Ando had even stronger spells in the form of Pyre Zombie, Breath of Darigaaz and Magma Burst. Despite the stronger spells, the matchup seemed very close with Benafel having a better mana curve to get in some early damage.

Reiji won the toss and chose to play. Both players just dropped land of their first turns, but Benafel acted first on his second turn, casting Rage Weaver. Ando did not have a corresponding play until his turn four Trench Wurm.

This play seemed to stop the Rage Weaver beatdown, but Chris responded with a hasted Kavu Runner which traded with the Trench Wurm. In his next turn, Reiji replaced his Wurm with a Volcanic Imp, which threatened to attack from the air. But any hopes of this happening were dashed by Benafel's Flametongue Kavu, which allowed Benafel to attack Ando to 16 life. 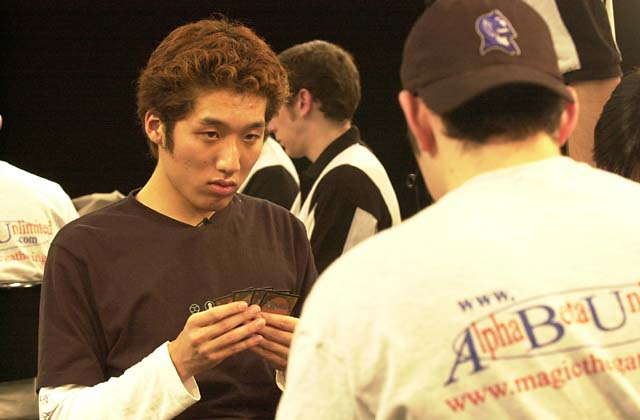 Ando looked frustrated at his continued attempts to stabilize his board position, and summoned a Slingshot Goblin to aid his defense. It traded with the Flametongue Kavu, but any hopes of recovering his board position were dashed when Chris played a Hypnotic Cloud with kicker, causing Ando to discard a Lava Zombie, Faerie Squadron and Vodalian Zombie, which were sitting in his hand due to his lack of Islands.

The game went quickly downhill for the Japanese player, drawing land after land, and the American quickly finished the match with his Rage Weaver and Nightscape Familiar.

Noting his lack of blue mana producing lands in the first game, Ando decided to make the unusual choice of sideboarding out a Maniacal Rage for Chromatic Sphere. Benafel decided that his main deck was fine and chose to keep his main deck configuration. Reiji once again decided to play first.

Benafel was again first to act with a second turn Nightscape Familiar, but Ando comes out faster with a Kavu Scout that was three power. But the Kavu was short lived, trading in Benafel's turn with a running member of his same species. Ando now summoned a Trench Wurm, which held off a Shivan Zombie and Nightscape Familiar. Deciding that he would rather have a Lava Zombie, the Japanese gated out the Trench Wurm. But like the first game, American kept up the pressure casting Flametongue Kavu, destroying the Lava Zombie. But in an attempt to re-stabilize, Reiji recast his Trench Wurm and Tribal Flames targeting the Flametongue Kavu.

But like the first game, Benafel cast a devastating sixth turn Hypnotic Cloud. This cloud was nowhere near as good as the first one, netting only 3 lands. It finally seemed that Ando had stopped the bleeding, casting a Slimy Kavu, and having his creatures being a little larger than Chris' remaining ones. That's why it cam as a surprise the next turn when Benafel sent in his whole team, seemingly on a suicide mission. Ando made the obvious block, blocking the Shivan Zombie with Trench Wurm and the Familiar with his Slimy Kavu. Benafel let both creatures die, choosing not to regenerate the Familiar. The reason for this became obvious, as Benafel cast an Urborg Shambler the next turn, reducing the toughness of the Trench Wurm to two and causing it to die due to lethal damage. 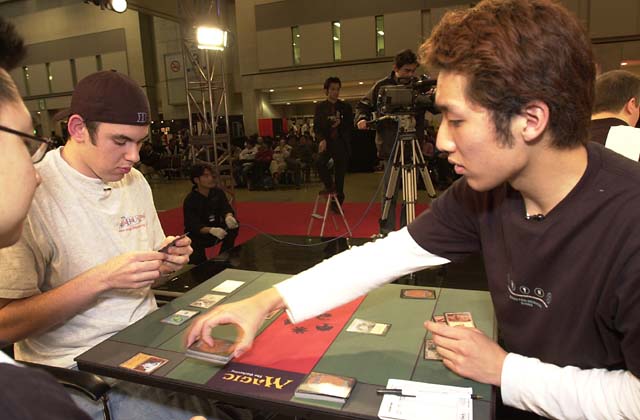 The Urborg Shambler was promptly removed by a Smoldering Tar, but he was replaced a less impressive Rage Weaver. Reiji decided that the best form of defense was attack, and attacked with Slimy Kavu. He then summoned a Duskwalker with kicker, which seemed it would dominate the board. But again it traded with a Rage Weaver and a Zap, and Benafel reinforced his team with a Sparring Golem. Reiji had no fear of the Golem and kept sending in with the Slimy Kavu, summoning a Rainbow Crow to aid in his attempt to reduce Benafel's life total.

His race became a lot worse however when Benafel cast a Mire Kavu. The wily Japanese had one more trick though, targeting the Kavu with Terminate. Benafel responded with a Repulse, saving the creature. Being on five life, though he was unable to stabilize when Benafel recast his Kavu, as well as a Shivan Zombie and a Rogue Kavu, and conceded the match.