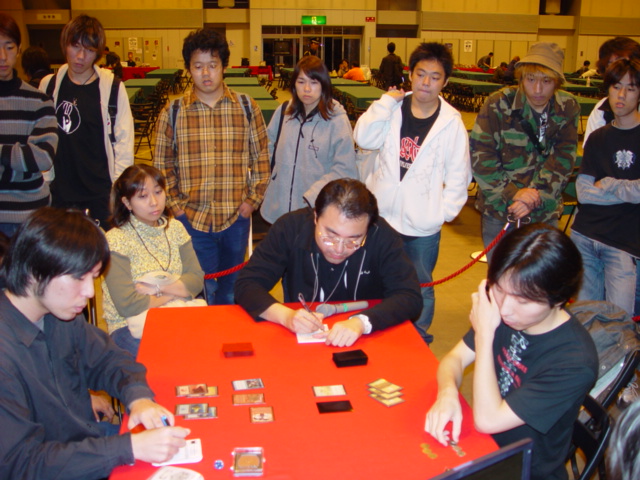 Shuuhei Nakamura has been quietly building his reputation as one of Japan's top pros. He made the finals of Japan's largest Grand Prix, Kobe, and then directed his team S.S.D. to the finals of Grand Prix - Nagoya earlier this year. Now he finds himself just one match win away from a title of his own. Rei Hashimoto is also hungry for some recognition. He's a pro player from way back, but cut back on his Magic to pursue school. He came back for another run, and he's finally on the verge of greatness.

Nakamura has a red-blue deck that boasts two copies of the combination's most powerful common: Lavamancer's Skill. With multiple Wizards, and more importantly Mistform Wall, the Skill does two points all the time. That'll pick apart anyone's deck. In fact, Tsuyoshi Fujita says that blue-red is the most powerful combination, only because blue is so underdrafted. Hashimoto's deck takes "underdrafted" to the next level. He's got white cards in his board that are first picks in a lot of cases. He and Oiso were the only white drafters, and Hoshimoto was two to his right, ending up with the lion's share. Hashimoto also snagged a Dragon Roost right in front of Nakamura, a move that infuriated Nakamura. Now he's going to use that Roost to brutalize him.

Nakamura started with Imagecrafter and Goblin Sledder, but that was shut down by Hashimoto's Gustcloak Harrier. Though Hashimoto missed his third land drop, he was still in business with a morph. Nakamura was too busy meeting him in the air with Thoughtbound Primoc, and solidifying his defenses with Mistform Wall. Hashimoto drew his fourth plains and played a Dive Bomber.

That was when Nakamura struck. He dropped Reckless One, turned his Wall into a Goblin and swung in with the Primoc, the Wall, and the Goblin Avatar. Hashimoto blocked the Wall with a mystery creature, and wound up taking six. He fired back for four and made another Dive Bomber. Nakamura started thinking. He summoned a Goblin Embermage and considered attacking. He held back. Hashimoto cycled a Disciple, summoned a Whipcorder, and also played the waiting game.

Nakamura brought out another Mistform Wall and swung with the Avatar. He could make it 6/6. Hashimoto thought, and then just chumped with his Harrier. He had bigger things in store. Glarecaster came down, with enough mana to spare to lock down the Avatar. Nakamura made his Walls into Goblins and swung with them and the Primoc. Hashimoto's face-down creature died to one Wall, thanks to the Embermage, and a Dive Bomber took out the Primoc. He summoned Ixidor, Reality Sculptor. That was all he had to say. He was out of cards.

Hashimoto decided to press. He tapped out but one for Grassland Crusader, and swung for three in the air. Nakamura untapped and slammed the top card of his deck against the table. It was Essence Fracture. The Crusader and Dive Bomber went back to Hashimoto's hand, and after he locked the Avatar he was brought to three by the beats. With the Embermage Goblin making Glarecaster's ability a non-factor, Hashimoto started to shuffle up for game two. 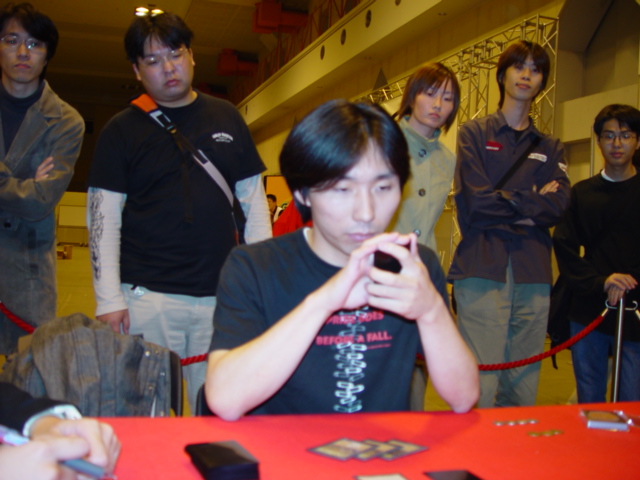 Hashimoto's quick beats from Glory Seeker and a morphed creature were soon shut down by Mistform Wall. Not right away, Nakamura wasn't about to risk it in combat. No, he waited a turn and enchanted it with Lavamancer's Skill, turning it to a Wizard to start picking off Hashimoto's creatures. Still, he was reduced to ten before getting to a stable situation. His Wall stared at Daunting Defender and a tapped Daru Lancer.

He made a Goblin Taskmaster and Reckless One, then swung in for two points. The two three-power guys brawled in. Nakamura blocked on and fell to seven. Hashimoto lowered the boom with Dragon Roost. Nakamura knew he didn't have much time. He Essence Fractured Hashimoto's creatures and busted through for five. He still had thirteen points to go.

Hashimoto, unsurprisingly, sat on his seven mana. Nakamura swung in again. A Dragon arrived to block the Taskmaster, and Nakamura pumped his unblocked creatures to deal seven. He was close. Hashimoto swung in, then busted out Catapult Squad and Daunting Defender. Nakamura didn't draw Wave of Indifference, and scooped. 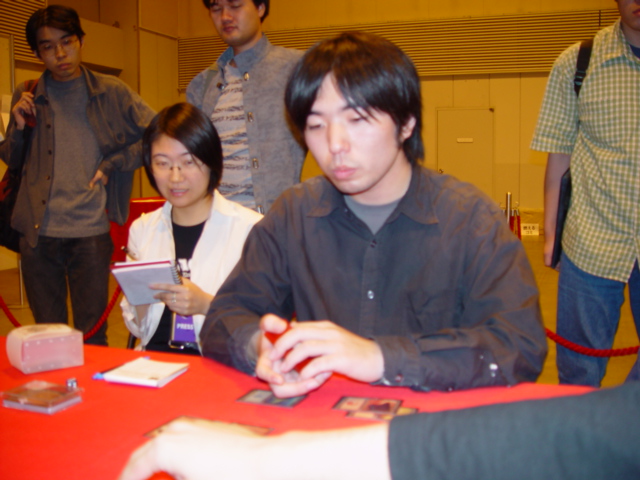 Nakamura kept a hand short on blue mana for the final game. He answered Hashimoto's Medic with a morph, but didn't find an island to make things ridiculous. He dropped Lavamancer's Skill on his Ogre and hoped. Hashimoto untapped and Shocked it. A small silver lining was that he swung with his Medic, letting Nakamura cycle Solar Blast to kill it. It gave him another mountain.

Meanwhile Hashimoto was busting out his air force. Gustcloak Harrier, Dive Bomber, and when Nakamura did find an island for his Mistform Wall, another Dive Bomber. With so many fliers and no second Lavamancer's Skill, Nakamura was forced to give the match to Hashimoto, to the applause of onlookers and frowns of his supporters.