t all comes down to this. Hungary versus France vying for the title of the 2013 World Magic Cup champion.

For Thomas Nagy, returning captain of Team Hungary, and teammate Gabor Kocsis, this match is a shot at redemption. Both have represented Hungary for the past three years at the World Magic Cup, and last year they were ousted in Top 4 by eventual champions Chinese Taipei. Nagy chose to sit out and coach for the Top 8, trusting in his teammates and their preparation.

France has no shortage of accolades. After all, it has produced four Hall of Famers, including returning team captain Raphaël Lévy. There is only one trophy they've failed to bring home in their long and storied history: The World Teams title. Stephane Soubrier, acting as advisor in Top 8, also returns from last year's National Team, and their performance this weekend has erased the disappointment of last year's Top 16 finish. Now they're one match away from glory. 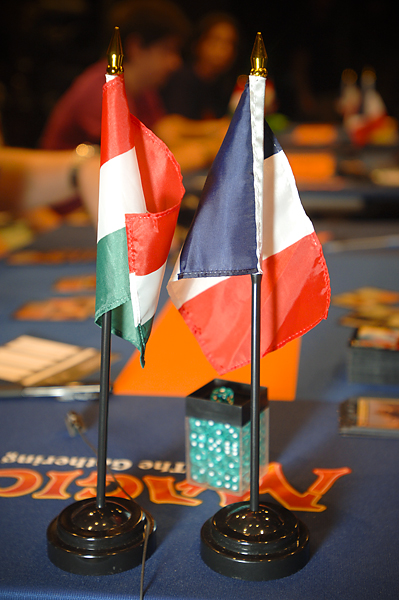 Guthmann had to mulligan on the play and was quickly behind as Kocsis followed up a turnone Arbor Elf with Strangleroot Geist and a Voice of Resurgence. Guthmann's draws were unkind and it seemed like mere moments before Kocsis had taken the first game.

He wasted no time putting the pressure on Guthmann in Game 2. After resolving a turn two Voice of Resurgence he went for Strangleroot Geist. Guthmann agonized over his decision and took a quick consult with teammate Stephane Soubrier. He decided to suck it up and Dissipate the Geist, giving Kocsis a token. He had to main phase a Restoration Angel on his fourth turn and frowned as Kocsis summoned Sublime Archangel and smashed in with his spirit for six damage. He mentally pleaded with his deck to give him a Terminus or a Supreme Verdict, but neither arrived. Kocsis's army grew, and Guthmann was quickly overrun.

I asked Kocsis about the matchup.

"Yes it's a very good match for me. I have Loxodon Smiter, Voices, three Advent main. I actually played against him yesterday and I lost. I made an incorrect sideboard decision, bringing in Rest in Peace since his win condition is Pike. I realized after playing it on turn two that it also turns off my Voices and Strangleroot Geists."

I asked him how it felt to know his team was one match win away from victory.

Hungary sees a win within their grasp.

"It feels great. It was actually very important that I win my match. My teammates have the two best decks - Blue-White-Red and Jund. I've been advocating to play this deck. They wanted me to play Mono-Red but I insisted. And I haven't won a match all weekend. I told them 'Don't worry guys, I'll win in the Finals,' and I'm so happy I did."

Lévy started out slow, which was good news for Hosszú. The bad news was that when Lévy tapped out on turn four to hire Garruk Relentless Hosszú didn't have any countermagic. Lévy grew an army of 2/2 wolves while Hosszú struggled with a clunky draw. Unable to stem the tide, he shuffled up for game two.

Things went the other way in Game 2. Now it was Hosszú's chance to play a trump after the skirmishes of the early turns. Five mana gave him Archangel of Thune. The following turn he killed a creature with Warleader's Helix, growing the Angel to a 4/5, then 5/6 after bashing in. Lévy's only hope was finding a Prey Upon and a giant creature to go with it, but he wasn't given much time. Two turns later and it was over.

With everything on the line, Hosszú drew up an unacceptable seven cards and sent them back. His six were little better. He did his best not to slump as he kept his five card hand. He had two Pillar of Flame to get rid of consecutive Elvish Archdruids, so Lévy was reduced to attacking with four 1/1s.

Still, damage is damage and it adds up fast when your opponent is short on mana. Hosszú started to draw out of it and got a Restoration Angel ambush in. Lévy took the opportunity to resolve a Wolfir Silverheart. Hosszú only had one white mana. He would need another and a Supreme Verdict to stay alive, but fortune was not with him. He extended the hand in defeat. The finals were tied at one match apiece.

Ah, the Jund Mirror. Magic's equivalent of a knock-down, drag-out street fight. A battle of haymakers answered by bigger haymakers, and where everything can turn on a single draw step.

Game 1 looked great for Korbl early. Simonot had a hand full of great spells but was stuck on three land. Korbl was able to capitalize with a Rakdos's Return for four, leaving Simonot with just two cards. Still, Korbl was flooding slightly and threat-light. Simonot finally found himself a fourth land and summoned Olivia Voldaren, opening the door for a comeback. Korbl went one better. He untapped, drew, and played an Olivia of his own. With five mana left over, just enough to steal the enemy Olivia and sacrifice her to the new Legend Rule. Simonot's deck coughed up a blank, and Korbl took the first game. 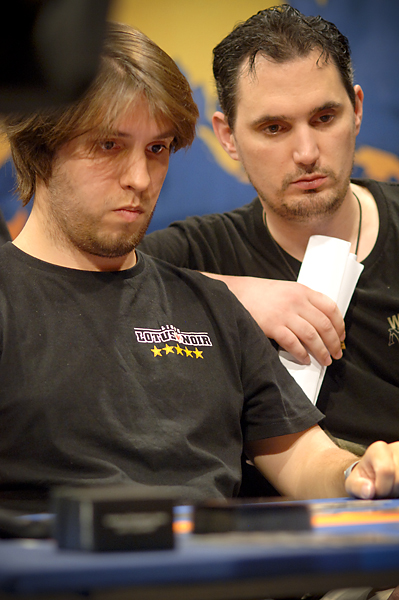 Down in a game in the final match of the tournament, Timothee Simonot sought to fight back for his countrymen.

The second game passed its first few turns quietly. Korbl summoned Chandra, Pyromaster to his side, but Simonot went one better and contracted the services of Garruk, Primal Hunter. Korbl didn't have an easy way to get rid of it. Garruk's beasts took down Chandra then turned on Korbl. His life total was falling rapidly. He had Rakdos's Return for four to leave Simonot empty-handed, but Garruk survived at one loyalty and continue to make beasts.

Korbl was down to just 7 life. He untapped and flipped over his top card: Bonfire of the Damned! Simonot was left with nothing. Korbl had two Underworld Connections at the ready, but not much life to fuel them. He drew and drew, but his deck was criminally unkind. Just a single Scavenging Ooze across many draws. It gave him life and cleared out the graveyards, but was soon answered by Dreadbore. His next three draws were all lands, and he was forced to send the turn straight back to Simonot. Simonot drew and played a Scavenging Ooze of his own. Korbl went back to the well. He drew Garruk, Primal Hunter and cast it before drawing again off his Underworld Connections. That left him with just five mana, so the Bonfire he drew couldn't kill the now 3/3 Ooze. Still, he had a beast to block with. He needed to survive just one draw step.

Simonot slid off his top card and peeked.

The whole French team cheered. It was Kessig Wolf Run, boosting his Ooze to trample over for the win!

By now the other matches had finished. It was all down to this one game. The winner's team would be crowned WMC Champions. Their teammates crowded around in chairs.

Both players had the crucial turn two Farseek, but Korbl couldn't find a fourth land. He summoned a Scavenging Ooze but was far behind when Simonot was already up to Huntmaster of the Fells and Thragtusk. Korbl hit his fourth land and played a Huntmaster of his own, and that's when Simonot daggered him with a brutal Rakdos's Return for four. Korbl consulted Captain Thomas Nagy, and held on to Olivia Voldaren. He untapped, drew a land and played both.

Impossibly, Simonot had no answer, and within two turns Korbl was up to six mana and enough red for the full three activations. Simonot could get him to three, but was empty-handed with just a pair of 2/2 wolves left. Korbl moved to the offensive. He hit for 7 and passed. Simonot returned fire with his wolves, lost one to Olivia and left Korbl at one. He revealed the Farseek he had drawn and passed the turn.

Korbl untapped, killed the last wolf, then attacked with Olivia. Hungary was one draw step away from victory.

Simonot rapped the top of his deck. All six of finalists teammates leaned in closer. The Hungarians called for Simonot to just flip over his top card.

He put it in front of himself face down, then turned it up so that his teammates could see it. 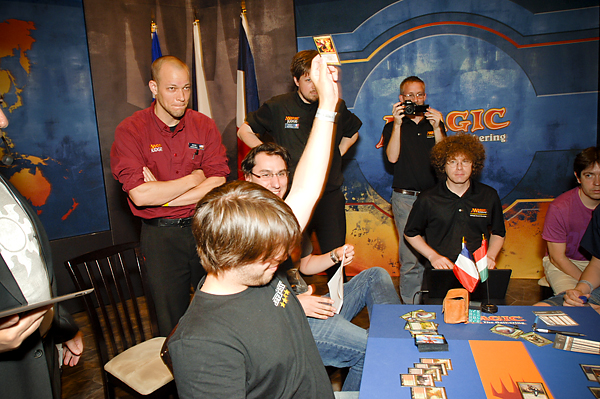 He turned it over for all to see.

Applause and cheers rang out from the audience.