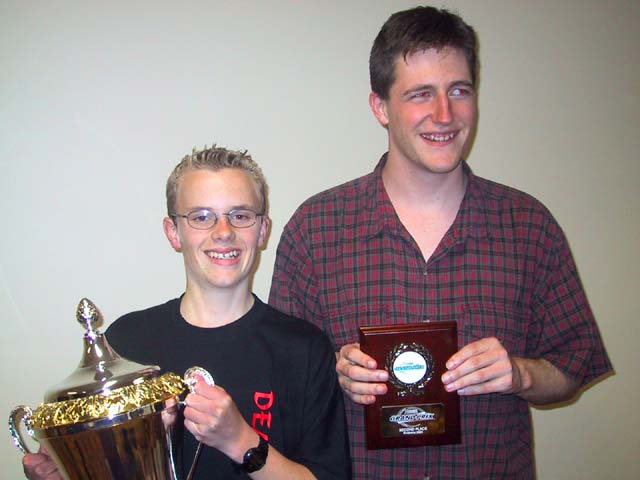 After a long hard slog the GP was finally drawing to a close, with Miller running his U/B Atog deck vs. Johnston and his U/W/b control deck. Both players looked tired but were still playing excellent magic, despite the late time.

Winning the coin toss was a good start for Miller and he chose to play first, dropping his ever looming Psychatog on turn 3. Johnston had no play on turn 3 and his turn 4 Dreamwinder was Syncopated by Miller, who then proceeded to untap and slap down a Dreamwinder of his own. In now what seems to be typical Johnston fashion he had the perfect answer in his hand, Kirtar's Desire, which took up residence on the back of the opposing Dreamwinder. Now it was Millers turn to get his spell Syncopated, as his Treetop Sentinel attempted to make the journey into play.

With Miller tapped out, Johnston seized his chance and brought a Mystic Zealot and a Hallowed Healer into play, but the Psychatog was slowly pecking away at his life, bringing him down to 11 life. Braids, Cabal Minion then entered play causing a land sacrificing fury during both players upkeeps as they both struggled to stay in control of the board without losing too many permanents to the monster. At the end of Johnston's next turn Miller counted the cards in his hand, then his graveyard, then his hand again and cast deluge to tap all the creatures on Johnston's side, a Luminescent Guardian, Mystic Visionary, Hallowed Healer and the Mystic Zealot for an alpha strike next turn.

Holding only a single card that he had drawn that turn, Johnston looked done for, but when Miller activated the 'tog for all the cards in his graveyard and left two cards in his hand, Johnston flashed up the embolden that he had drawn the turn earlier. With the advantage now swung in the opposite direction, Johnston went on the offensive sending his Zealot, Guardian and Visionary to the red zone, reducing Miller's life to 11 points. After sacrificing his Atog to Braids and then Gravedigging it back into his hand and into play Miller witnessed another fantastic pull from the top of Johnston's deck, another Zealot and when it entered play he scooped up his cards for game 2.

Miller chose to play first again and brought out a Dusk Imp on his third turn. Johnston responded with a Nomad Decoy but Johnston kept the aerial assault on full blast with a Treetop Sentinel and an Aven Fisher. Once again Johnston had the perfect answer to the problem that was facing him playing an Aven Flock, forcing Miller to attack into it with the Fisher and the Sentinel. Miller got his draft deck into full swing when he cast Psychatog and then a turn later put Braids into play. Despite the heavy sacrificing both players continued to lay creatures into play, with Johnston playing his Luminous Guardian and Miller playing a Mortivore, which was met with Kirtar's Desire. Forcing through a Ghastly Demise on the Nomad, Miller looked as though he would be able to begin to force through some hefty damage, even more so when he summoned two Zombie Assassins.

On the very next turn Johnston found a Demise of his own for the Treetop Sentinel that was holding off his Flock, Millers life began to slip away to the white flyer. One of the Zombie Assassins had to be used on the Luminous Guardian, and a Syncopate then had to be used to stop the other Assassin from having Second Thoughts during the attack phase.

When a Dreamwinder entered play on Johnston's side the two players were beginning to reach low life with the total scores being 8-6 in Johnston's favor. Miller then played a card that threatened to change the complexion of the whole match, Morbid Hunger, but Johnston had what could turn out to be the MVP of his finals series, Embolden. By preventing 3 damage to himself and one damage to the Dreamwinder Johnston nullified any possible attacks that Miller could muster with his Atog. With the game beginning to get tense Johnston pulled two more incredible cards off the top of his deck, Hallowed Healer and Cephalid Looter. Miller was no slouch either, pulling a Diabolic Tutor but when searching through he realized that there wasn't much left that could push through a thresholded Healer.

With the time nearing 12 o'clock the players were then asked to suspend play while the venue was moved back to the staff hotel as the city hall was being closed for the night. When play resumed back at the hotel Miller flashed back his Hunger targeting Johnston, but the power of the online looter and Healer was just too much. Johnston drew into constant creatures dropping a Visionary and a Resilient Wanderer, and Miller was helpless as he was overrun by the flyers and the wanderer.