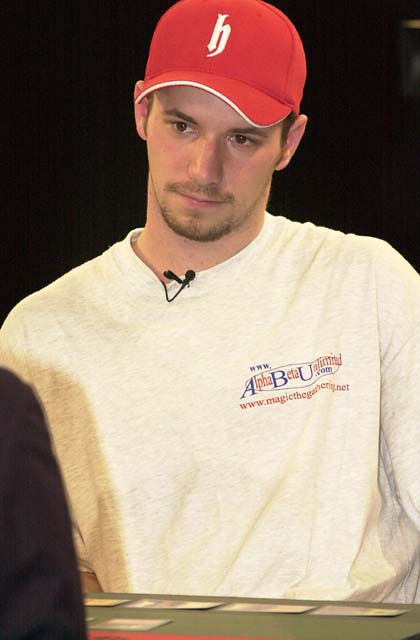 Ryan Fuller is on fire. Coming into his finals match against Kazayuki Momose, Fuller was on a 38-2-1 streak that included his victory at GP Prague and his historic 14-0 finish in this weekend's Pro Tour stop in Tokyo. It was Momose's job to put an end to Fuller's winning ways, but in the end, he became just another notch on the Canadian's belt.

With a deck match up that seemed to favor Fuller, now residing in Amsterdam, Momose decided to play first, with his approach to the match being that whoever drew their big creature bomb- Darigaaz for Momose, Shivan Wurm for Fuller- most often would likely win the match.

Game one started with Momose, playing first, playing a Forest and a Swamp, while Fuller answered with a strong mana draw of Shivan Oasis and Plains, allowing him to play Obsidian Acolyte on turn two. After each player played a land and said 'go' on their respective turn threes, they each played a fourth land accompanied by a Root Greevil.

At this point, chaos ensued. With Momose struggling to find a Mountain to cast the red cards he held in hand, he went to his draw step and 'peeled' a Mountain off his sideboard. Fuller immediately noticed this had happened and a judge conference in excess of ten minutes ensued. Finally, with Momose returning the Mountain immediately to his sideboard upon realizing his error, the judges ruled his indiscretion was unintentional, the cards were straightened out and the game continued.

The rest of the duel was a massacre. As Momose played a Forest or Swamp every turn, Fuller responded with spells. First, Samite Pilgrim entered play, then Serpentine Kavu. On Ryan's 6th turn, Sunscape Apprentice and Glimmering Angel joined the fray, and two turns later, with two Swamps, 5 Forests and no Mountains in play, Momose conceded with 2 Soul Burns, Restock and three red cards in hand.

Game two didn't go much better for the Panzer Hunter. With Fuller once again having an excellent mana draw that saw him with all three colors in turn two, the Canadian played a second turn Thornscape Familiar, which was promptly Lightning Darted, followed by a fourth turn Glimmering Angel and 5th turn Kavu Climber. Momose had answers of his own, however. Before the Angel came into play, the Japan native played his own 2/2 flyers, Volcano Imp and followed this with Darigaaz, the Igniter. Fuller was visibly shaken. 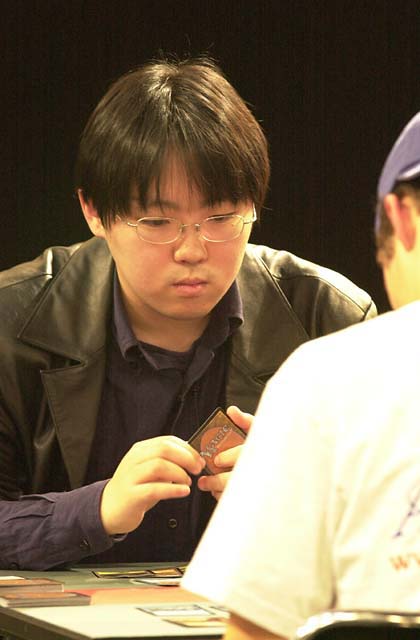 "That's a good card," Fuller communicated through Koichiro Maki, serving as table judge for the match. Fuller drew, and with six mana available to him, attacked with the Climber. With Fuller holding five cards, Momose decided it safer not to block and took the three, but after drawing, decided that the potential for Explosive Growth that had scared him on Fuller's turn was irrelevant and attacked. Fuller blocked the dragon with his Glimmering Angel and indeed did have the Growth, causing Darigaaz to die without dealing a point of damage.

From there on, it was all too easy for Fuller. Once again, Momose drew into a mana glut as Ryan played Benalish Lancer and Sunscape Apprentice. When Momose tried to Soul Burn the kicked Lancer for six, Fuller had the answer in the form of a kicked Pollen Remedy. At this point, the players were asked to pause their play for the conclusion of the Noah Boeken/Itaru Ishida match. With Fuller's victory a foregone conclusion, Ryan said 'I hope Noah loses' with a smile on his face, wanting his friend and teammate to sweat a little before receiving his first place share.

When play resumed, with cameras rolling, Ryan tapped three mana and cast Armadillo Cloak on his Lancer. He attacked for twelve, reducing Momose to 1, and a turn later, the match was over.