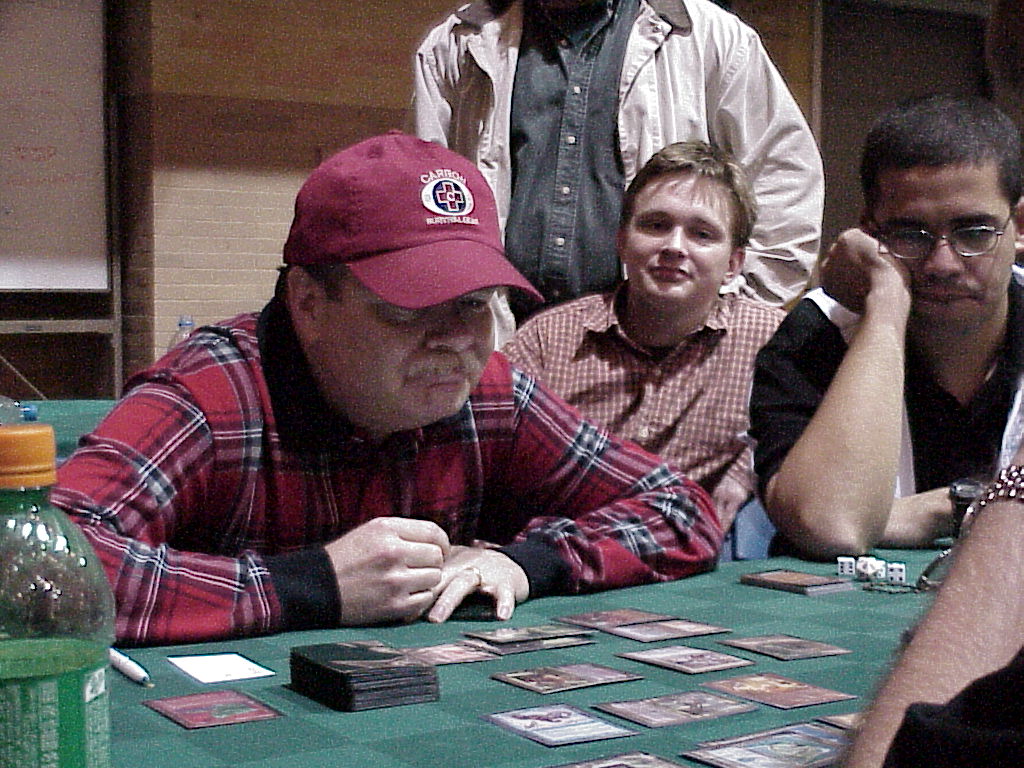 Pro Tour New York champion Scott Johns drafted a red/blue/black "good stuff" deck, splashing some bad stuff. Tom Swan, was who trying to become the oldest Grand Prix (or Pro Tour) champion in the history of the game, drafted a red/green/white deck with - you guessed it - rith the awakener. Rith likes gold, you see, so he always comes out to play in the Top 8 when the big money is on the line. Rith also likes Armadillo Cloaks and Tom had two of those for him.

Swan is 50-years old and retired from Dupont. Now he does financial consulting and plays a lot of Magic with his son Brad, who lives at home (Landenberg, Pennsylvania) and attends the University of Delaware. Brad (who had a GP Top 8 of his own in Philadelphia and claims to be the best 1 on 1 drafter in the world) finished 35th this weekend. That father-son duo has played together at 4 different Pro Tours, including both team Pro Tours.

Swan had an interesting decision to make on the second turn of game 1. He had yavimaya barbarian as his only 2-drop but his only red mana was a riths grove. He stunted himself to play the bear. Johns answered with sapphire leech and two turns later Swan played out a slingshot goblin, which Johns immediately killed with agonizing demise. Johns kept attacking with his Leech and an urborg drake while Tom kept playing monsters for a few turns: razorfoot griffin, kavu climber, and then crimson acolyte joined that Barbarian in his army. Johns' first thought his halam djinn would make a good blocker, but then that Acolyte hit. Then Johns thought his crypt angel would be able to block, but Tom had armadillo cloak ready to put onto his Kavu Climber and suddenly the race wasn't close. When Tom pointed Assault at Scott's head, the race was over.

Scott played out a hate weaver and a cavern harpy before Tom could play Slingshot Goblin in game 2. "Not that guy again!" complained Johns. He had the Demise yet again, but he did not have a fourth land so his Cavern Harpy wound up back in his hand. Brad was visibly excited for his old man when all Scott did was play an urborg phantom and say done. Eventually Scott drew darigaazs caldera and got rid of the offensive Goblin. Johns' hand had some absolutely sick Cavern Harpy combos in it: phyrexian bloodstock, Crypt Angel, and hunting drake. All he needed was time and mana. 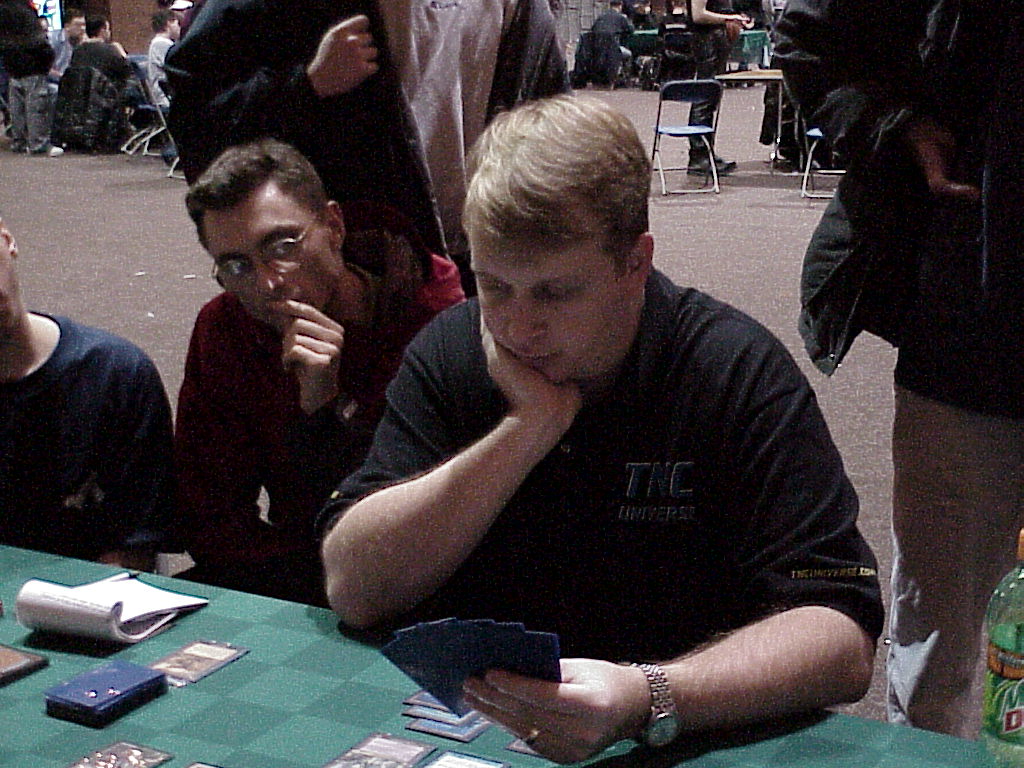 Tom didn't give him much time more time as he played Kavu Climber followed by Rith. Scott needed his 5th land immediately, and got it. He thought for a bit and decided he would play Phyrexian Bloodstock and let Rith hit him once so he could actually destroy it rather than just put it on top of Swan's library. On his turn Swan Cloaked it up and served! Rith only got into the red zone on that one turn, but that was enough - the life totals swung to 28-6 and 4 Saprolings came into play. Scott took a long time for his next turn and decided his best bet was to play lava zombie, bouncing the Bloodstock and killing Rith. He had 2 blockers available, so it looked like he could survive the turn, but gerrards command enhanced one of the Saprolings and dealt the final damage.

Congratulations to Grand Prix champion Tom Swan. And congratulations to Rith. After early exits from each of the last two Pro Tour Top 8's and the last North American Grand Prix Top 8, Rith finally brought home a first place prize. He couldn't have done it for a nicer guy. 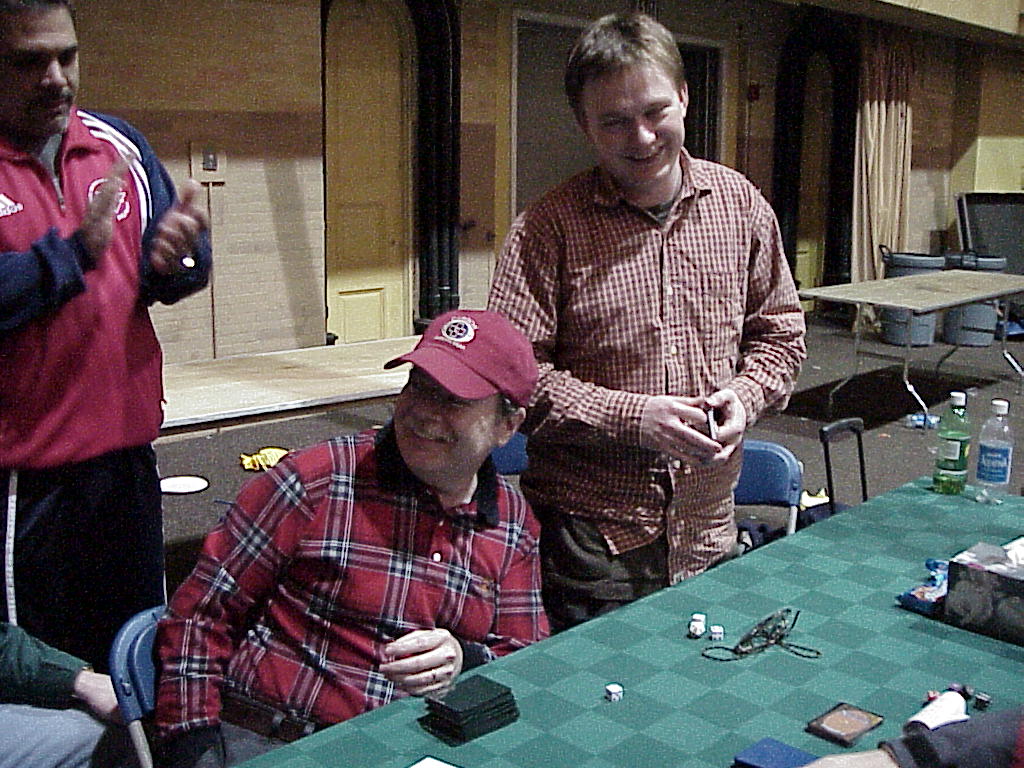 I talked to Tom about his draft and he explained that he didn't get much of anything from Planeshift, but his deck was already built once Invasion ended. His first pack was disappointing and he wound up taking Assault/Battery just for the Shock half. Then Scott Johns passed him an Armadillo Cloak and a fact or fiction. He took the Cloak, passing the Fact or Fiction to Matt Vienneau. Next up was a Yavimaya Barbarian and after that the red/green/white hits just kept coming. When the second set of packs started, Vienneau passed him Rith. Swan wound up with a beautiful mana base that included two Rith's Groves, two elfhame palace, quirion elves, harrow, and a tinder farm. Swan explained that he runs two Tinder Farms in his version of Kibler's Red Zone deck, and the Tinder Farm worked out well for him in this deck as well. So did Rith.