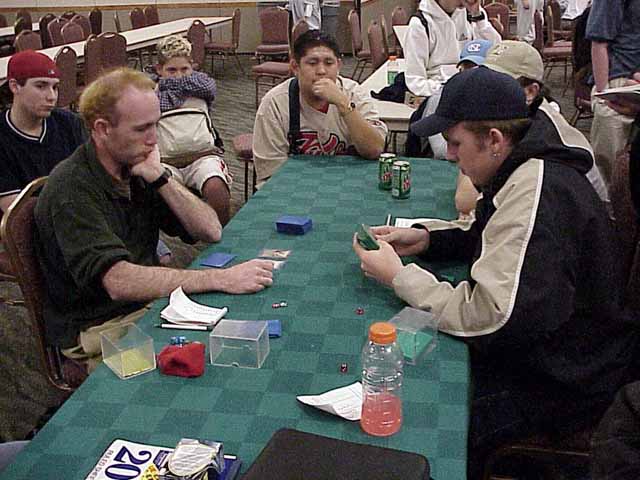 Game One: On Being Flooded

I have to say that, going into this match I am heavily rooting for Sean Smith, a fellow Denver area player. However, being from the Phoenix area, most of the crowd gathered around the table was pulling for Tubby. The judges had said they would hold the match until the Sideboard was ready to have a reporter at the match. But, as I wandered over to see how Smith was doing in the semis it became readily clear that the finals were well under way. My first clue was that each player had about seven lands in play. So, I tried my best to catch up...

When I arrived, Smith's permanents included two Tundras, a Volcanic Island, a Wasteland, two Tropical Islands and an Oath of Druids. Fitzgerald had a Gemstone Mine, a City of Brass, a Savannah, a Tropical Island, a Tundra, and Underground Sea and a Hibernation Sliver. An onlooker got me up to speed, saying that not much had happened. Apparently, Fitzgerald had first turn Duressed and Smith had responded by Tutoring for an Oath of Druids.

The first turn I see, Smith attacks with the Feeder and Fitzgerald blocks with a Hibernation Sliver. After damage is on the stack, Smith gains life, making the score 26-15ish. Fitzgerald consults for a Seal of Cleansing, losing one in the first six cards. He finally uncovers a Seal about 17 cards into his deck and Smith wastelands Fitzgerald's Tropical Island. Fitzgerald taps it for blue and uses the mana to cast the Seal. Smith is holding a Force of Will, a Seal of Cleansing, a Swords to Plowshare and a Mana Leak. He hard casts the Force of Will, but Fitzgerald counters.

Things quickly go downhill for Smith as he draws his first of three land in a row, a Tropical Island. Fitzgerald is able to get a Hibernation Sliver into play unopposed, but Smith mana leaks the Crystalline Sliver that follows the Hibernation the same turn. Fitzgerald destroys the Oath and Smith draws a Flood Plains. Fitzgerald begins to attack and brings Smith down to 22. Smith draws another Flood Plains and Fitzgerald is able to win a counter war over an Acidic Sliver. Before the Acidic resolves, Smith casts Swords to Plowshares on the Hibernation Sliver. Fitzgerald soon casts a Crystalline Sliver and continues his assault. Smith is able to get a Sterling Grove on the table, but is unable to draw an answer. Smith is soon at 6 life and Fitzgerald throws all his Slivers at Smith for the win.

After the game, I decide that despite watching all of Fitzgerald's matches, I haven't watched his side of the table. So, I quickly run over to watch his sideboard. He takes out Winged Slivers, Swords to Plowshares, Misdirects, and Duress in favor of Pyroblasts, Seals of Cleaning and Erases. 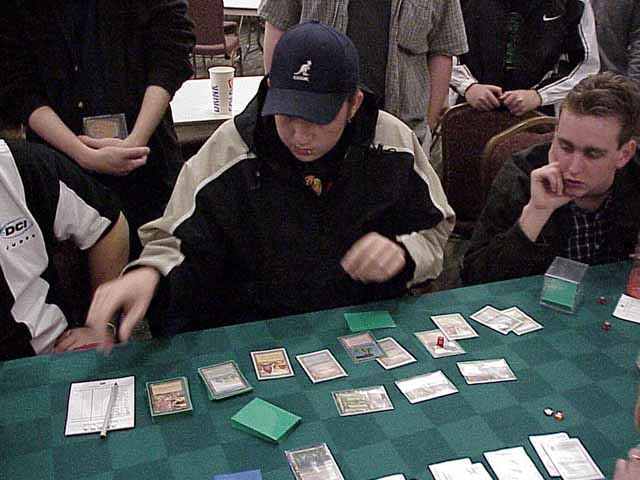 Smith offers Fitzgerald his last chance to split the prize. After all, he adds, "I've never lost after siding in this matchup."

Smith plays first and after several turns, Fitzgerald plays and Acidic Sliver, leaving him an Acidic and Crystalline Sliver in hand. Smith sacs a Flood Plains for a Tundra and Counters the spell, leaving him with three cards in hand. On his next turn, Fitzgerald tries to draw out more Counters by casting the second Acidic Sliver. It resolves with no resistance. Smith plays a Powder Keg and Fitzgerald is able to force a Seal of Cleansing onto the table with a Pyroblast against Smith's Counterspell. He attacks and brings Smith to 18.

Smith then enters his turn and forgets to put a counter on the Keg. I'm not sure how costly this was, as I'm not sure what Smith was holding. Smith casts Gaea's Blessing, putting a Flood Plains and two Counterspells back in his library. Fitzgerald is able to bring Smith to 16 next turn and gets a Crystalline Sliver into play by pyroing Smith's Counterspell.

Smith does not make the same mistake twice and remembers to put a counter on the Keg, then casts Wrath of God. Fitzgerald casts Demonic Consultation for a Force of Will and casts the Force, discarding a Counterspell. Smith's Keg is destroyed by Fitzgerald's Seal. He attacks Smith down to 12. Sean then Enlightened Tutors for an Oath of Druids during his upkeep, lays a land and casts the Oath. Fitzgerald is holding an Erase and is able to successfully cast it, destroying the Oath, during his next turn. He attacks and is able to bring Smith down to 4. Smith applies no pressure and is unable to block with more than a Treetop Village. After damage is on the stack and Smith is at 4 life, Fitzgerald finishes him off, amid the now-familiar cheers of "Tubby!", by lobbing a Crystalline Sliver at him.

I was sad to see that Smith's proclaimed testing experiences didn't hold up in the finals, but Fitzgerald played extremely well and had amazing draws.