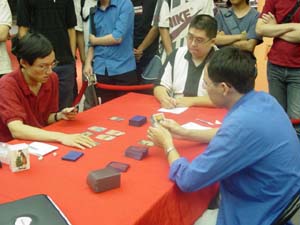 The strains of "The Final Countdown" playing in the background were all-too fitting. The all-Taiwan finals had everyone's attention. On one side sat Kang Nien Chiang, playing Squirrel-Opposition, an update of a proven deck. Across from him was amateur Sheng Hsun Hsia, playing the tournament's most creative deck, a blue-white-green control deck that abused Living Wish and Hunting Grounds.

Winning the die-roll wasn't enough acceleration for Chiang, whose Bird rifled through Call of the Herd. He Iced a land to push through more damage, but he was Worried by Hsia's lack of concern. Things worsened when he failed to find a fourth land to bust out Opposition.

Hsia started to pick up steam. A Fact or Fiction got him Absorb and Fact or Fiction over two land and an Enforcer. He untapped and wiped the board with Wrath of God. He even had enough mana left over to Absorb an Opposition. Then he went for the backbreaker. Living Wish got Phantom Nishoba, and Hunting Grounds entered play. Casting spells was suddenly very dangerous for Chiang.

Hsia was willing to take it leisurely. Another Fact or Fiction got him past five land on the top of his library, putting three into his hand. Chiang played Cunning Wish at end of turn, but Hsia held back on the Nishoba. Chiang got Ray of Revelation. Hsia played Deep Analysis twice, making sure the waiting game favored him.

He hit twelve land and hard-cast his Phantom Nishoba. Memory Lapse stopped Counterspell. Chiang went to his sideboard again, this time for Rushing River. The Counterspell came back to make sure Opposition came into play. An Elf was all it took to lock up the Nishoba. Next turn he tried a Flametongue Kavu, and Hsia Repulsed his Nishoba in response. A kicked Rushing River denied him the card and put the Grounds back as well. The Elf died at the Kavu's hand.

Living Wish fetched Cloudchaser Eagle, and the writing was on the wall. The final nail in the coffin was Genesis. The final play saw Hsia allow Worship to resolve while holding two Counterspells and a Memory Lapse, choosing to win with Repulse instead. 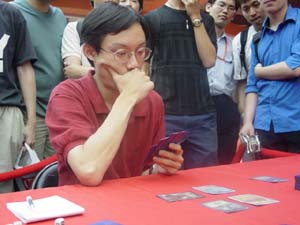 Chiang opened the second game with a Bird, then a Call, then another Bird and a Nest, countering Hsia's Counterspell. He scored a hit and then lost his team to Wrath of God. Meddling Mage drew another of his counters, and he started working his Nest.

Hsia went for a main-phase Fact or Fiction. He took three lands over Deep Analysis and Living Wish. Chiang knocked his deck, looking for the land that would enable his Opposition and wrap up the game. It didn't come. He continued to punish with his tokens, bringing Hsia to seven. The fourth land showed up when Hsia had six mana open. However, Hsia had no wrath. Repulse took care of one. He fell to four.

His sideboarded Circle of Protection: Green leapt to his rescue. With so much mana on the board he seemed perfectly safe. Hunting Grounds made it more so. Chiang Fired him in response to bring him to two, but it looked like it was in the bag. Opposition called out Mystic Snake.

Hsia's control of the situation fed his hubris. He showed complete disregard for his opponent, attacking with his Snake and playing Repulse on one of the tokens. He was forced to tap more when they ran in the next turn, and then had to tap low for Memory Lapse on Opposition. Chiang showed him another Fire. The crowd went nuts with applause over Chiang's escape from defeat. 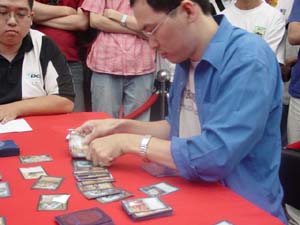 Game 3 would be all the harder for Chiang with Hsia going first. Chiang started with Bird and Call. Hsia Lapsed. Chiang tried again. This time it met Repulse. He flashed it back. Hsia dropped his Circle. Phantom Centaur entered play just fine.

Fact or Fiction handed Hsia Wrath of God, Mystic Snake and Deep Analysis over Memory Lapse and Counter. He had all the tools he need to dismantle Chiang. Particularly that Wrath. Chiang was working with two land and two Birds for mana.

Hsia continued to dig. Deep Analysis worked the first time, but got countered on the way back. He pitched Genesis to the graveyard. Still, he had no white mana. Finally Chiang found himself a third land. He tried a Nest with counter backup, but Hsia was ready with Counterspell and Lapse. Hsia's hand was was an awkward group of two Wraths, Nishoba, Mystic Snake and Living Wish. Still he had no second white.

The crowd got a giggle when Chiang walked right into Nantuko Monastery. He lost a token for it, but luckily it had little effect on the game. Adarkar Wastes off the top let Hsia play his Wrath. Chiang countered. Hsia forced it through with Mystic Snake.

Chiang tried to hang on. Cunning Wish got him Krosan Reclamation to put Genesis and Meddling Mage back in Hsia's deck. Hsia had no choice but to tap out for Nishoba. Chiang did the same for Opposition, falling to sixteen. Hsia's attack with Monastery and Nishoba left him at five. He passed it back. Chiang drew, and then in disgust showed a hand of four, count 'em, four Seedtimes.