After a long weekend of Block Constructed and Draft, only one match separated the champion of Pro Tour Nagoya from his title. The finals of the second 2011 Pro Tour would be determined by the Limited prowess of American David Sharfman and Japan's Toshiyuki Kadooka. Sharfman had yet to lose a match on Sunday, and was threatening to become only the third player ever to 9-0 a Pro Tour Sunday if he kept the streak going. His opponent had eliminated former Pro Tour champion Luis Scott-Vargas in the quarters and was succeeding in large part because of his powerful one-two punch of Treasure Mage and Thopter Assembly.

Flight Spellbomb was the opening play of the Pro Tour Nagoya finals as David Sharfman led the way into battle. His main-deck inclusion of Koth's Courier seemed particularly clever, as the creature was able to bash into Kadooka uninhibited. Toshiyuki didn't take the early start from his opponent lying down, however; instead, he worked on accelerating his mana base with Viridian Emissary and poisoning David with Cystbearer. 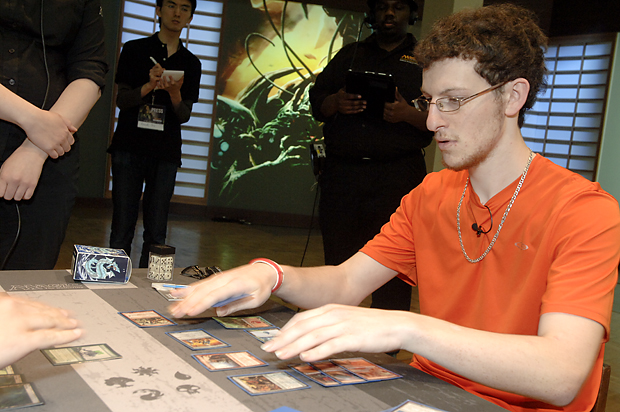 David Sharfman once again gets off to a strong start.

Blisterstick Shaman from the American allowed him to get in with both an Auriok Replica and a Koth's Courier. Kadooka's early mana acceleration looked to pay off as he was able to cast a Thopter Assembly ahead of schedule. The powerful rare had been key to his success in the quarters and semis, but Sharfman was ready and used Steel Sabotage to counter. That meant he could continue attacking with his team, a move that forced Toshiyuki to sit back with his own creatures in order to block.

Trying to dig out of the hole he found himself in without his Thopter, Toshiyuki used Treasure Mage to fetch up a Razorfield Thresher. When his opponent cast Spin Replica, however, the Japanese player recognized he was facing two evasive creatures as the 3/1 began attacking alongside the Koth's Courier. A few turns later Kadooka scooped his cards up and the players headed to the second game.

Toshiyuki Kadooka opted to draw for the second game instead of playing, a somewhat surprising move but not unheard of in the Scars of Mirrodin Limited format. There were no signs as to whether he regretted that decision as his opponent opened on Embersmith into Blisterstick Shaman to aggressively threaten Kadooka's life total.

True to his deck's game plan, the Japanese player worked on accelerating his mana base via Viridian Emissary, then cast Vedalken Anatomist in the hopes of slowing his opponent down. 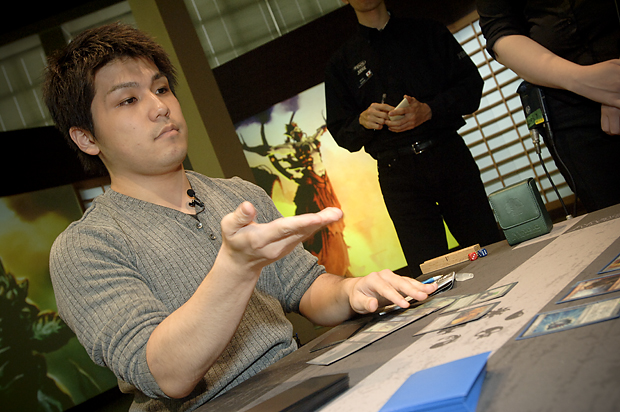 Sharfman, who was stuck on three lands, was managing to just barely stay ahead as his Koth's Courier joined the other members of his team and provided 2 points of unblockable forestwalking damage each turn. He lost his Embersmith to Vedalkan Anatomist, but found a fourth land and cast Bladed Sentinel.

With an army breathing down his neck, Kadooka found himself another accelerant/blocker in the form of a second copy of Viridian Emissary. Desperate to stabilize, he cast a Ratchet Bomb and Treasure Mage, hunting up his Thopter Assembly. The cards were powerful, but would he have enough time to get to the mana he needed to cast the flier?

David Sharfman certainly wasn't waiting to find out, casting a Spin Engine to again try to out-aggro his opponent with evasive attackers. Unfortunately for David, it meant all three of his creatures had a converted mana cost of three and potentially put him at risk of being blown out by the Ratchet Bomb. Toshiyuki couldn't wait that long and cast Slice in Twain on the Engine instead, falling to 4, then 2 from repeated attacks from Koth's Courier. 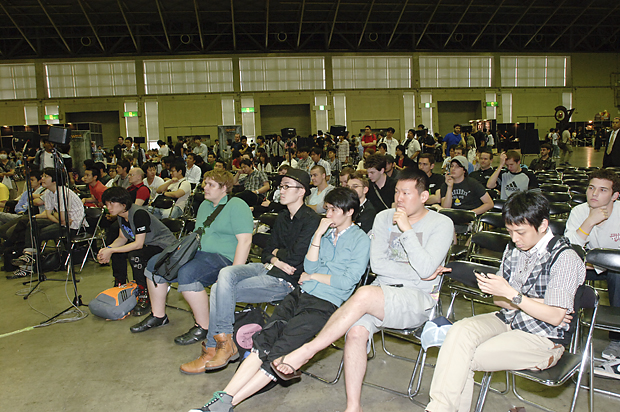 The on-site crowd is tense. (We're guessing the folks watching the webcast at home, whether in Japanese or English, are on the edge of their seats too.)

The Ratchet Bomb had two counters on it, and when Toshiyuki attempted to put on a third, his opponent had an unfortunate surprise for him: Shatter. The instant took out Kadooka's dream of blowing up the Ratchet Bomb to take out Koth's Courier, and that meant he was going to die from its next attack. With one draw step remaining between life and death in the second game, Toshiyuki moved to see his final card. When it was no help to save him, he conceded.

The tempo of the third game was much slower than the first two. Still choosing the draw, Toshiyuki Kadooka was the first player to cast a spell in the form of Ratchet Bomb. His opponent had Spin Engline on his third turn, then Bladed Sentinel a turn later. Kadooka had no plays, however, and missed his third land drop. He had to actually discard a card!

The turn of events was huge for the American. He spilled creatures to the battlefield, and when his opponent attempted to charge up the Bomb, he had Steel Sabotage to bounce it, protecting his horde. Toshiyuki continued missing land drops and in a final game that took under five minutes, Toshiyuki found himself eliminated. 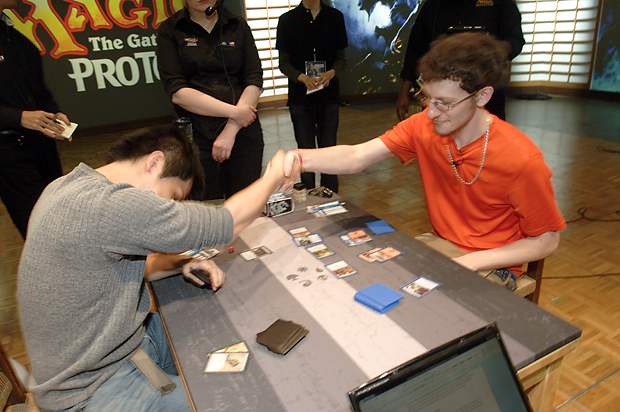 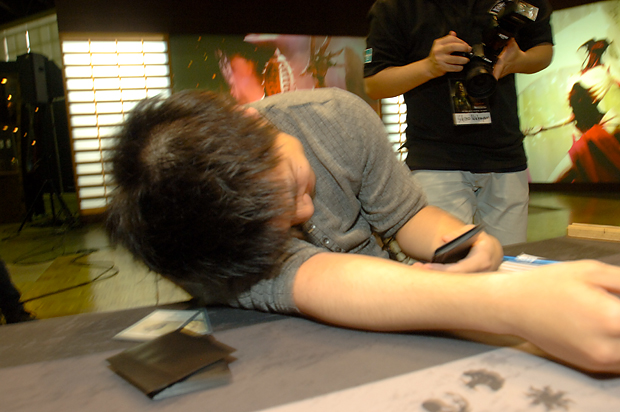 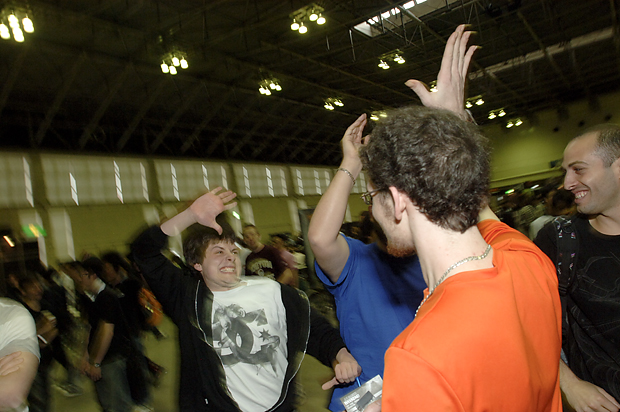 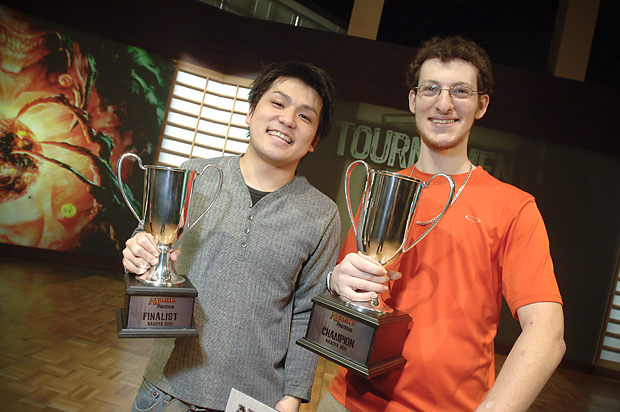