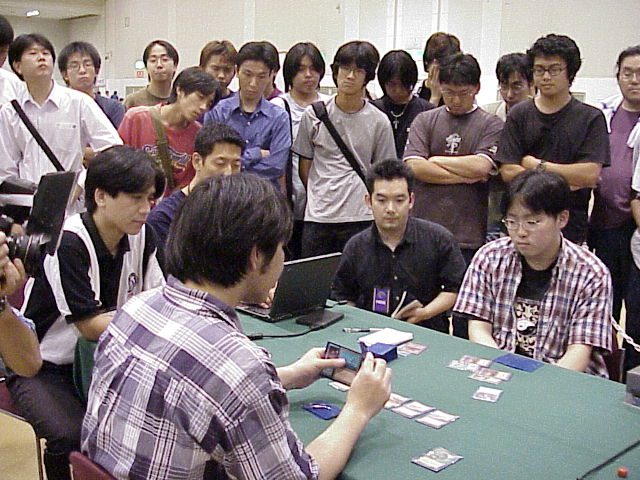 After all the fuss surrounding tempo decks of all descriptions, the finals of Grand Prix - Kobe were a classic matchup. Shuhei Nakamura stormed the battlefield with a cagey metagame choice of straight up red-green beatdown. Against this irresistible force is the immovable object of Itaru Ishida. Best known as the brains behind Panzer Hunters, Ishida has had many close calls with greatness over his career, and has been to many Pro Tours. Today he and his near-permanentless Blue-White-Red deck try for his first individual title.

Nakamura won the die roll, giving him a huge leg up in the matchup. He sped onto the board with Kavu Titan. His advantage would have been pressed by Raging Kavu, but Ishida was ready with Evasive Action for one. Ishida took another hit from the Titan, then dispatched it with Urza's Rage. Nakamura passed his turn without playing another creature, fearful of Exclude.

Ishida kicked into high gear with Fact or Fiction, getting Plains and Exclude over Mountain, Shivan Reef and Evasive Action. He continued to meet Nakamura on all fronts, destroying Thornscape Familiar with Urza's Rage and playing another Fact or Fiction. This time he got Prophetic Bolt and Repulse over mountain, Repulse and Absorb.

Nakamura tried to stay in the game, but his Raging Kavu was Excluded. Ishida permitted a kicked Thornscape Battlemage only to remove it with Fire. Nakamura flung it at him with his Keldon Necropolis. Ishida added injury to insult with Prophetic Bolt as he looked for his kill card.

He found it. Goblin Trenches entered play with nine lands on Ishida's side. He made two goblins and passed the turn. Nakamura removed one with Scorching Lava, and tried to work further miracles with Flametongue Kavu. Ishida Repulsed his lone token, and the Kavu had no choice but to send itself to the graveyard.

Ishida untapped and made two more goblins. He Excluded another Flametongue and sacrificed yet another land to his Trenches. Nakamura didn't have time to draw the two land he needed to kick his Urza's Rage. He scooped up his cards.

Nakamura kept a hand without red mana for game two, but struck hard quickly, with Kavu Titan, Thornscape Familiar and Blurred Mongoose. Ishida played an unkicked Breath of Darigaaz to buy a lot of time. He added a Meddling Mage to the mix, stopping Scorching Lava. Nakamura had Urza's Rage to keep the beatdown coming.

Ishida fell to eleven. He took another hit from the Titan and Excluded a Raging Kavu. Then he tapped out to go for the gusto: Doubly-kicked Rakavolver. He fell to seven rather than risk his monster in combat. He swung back, putting himself back in the race.

Nakamura brought him down to ten with Scorching Lava, then untapped and started pondering. He decided that the game was lost if the 'Volver survived, and so leveled Ghitu Fire at it.

Ishida Absorbed. Nakamura laughed and shrugged his shoulders. As he moved to pick up his cards the crowd broke out into applause. Itaru Ishida had become champion of Grand Prix - Kobe.