16 had come for these two teams. That's the final round for those counting at home. In the A seat we had Tomohiro Kaji, whose unusual deck choices had inspired a lot of respect for his unique take on green-black-blue control. Moroii, Clutch of the Undercity, and Twisted Justice weren't cards seen in very many Pro tour decks this weekend. Yet those cards, and his self-proclaimed MVP Bound/Determined from the side, had taken Kajiharu80 to the finals and possibly a Pro Tour victory.

Opposing was one Celso Zampere of Raaala Pumba. He too was playing green-black-blue, but was with a more conventional build focused on the aggro matchups. Starting triple Ribbons of Night, Celso's MVP was this weekend's most imposing creature: Simic Sky Swallower. 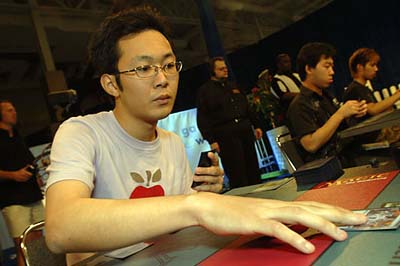 Tomohiro Kaji thinks through his Mimeofacture.

Celso used a rather deft behind-the-back shuffling maneuver, preventing all players from seeing any bottom cards of any deck. This technique was employed a few times in the first game as Tomohiro cast a multitude of Farseeks, hoping to accelerate into speedy Simic Sky Swallower. Celso was missing any kind of Rampant Growth tricks, settling for a Carven Caryatid and passing the turn. At six mana Tomohiro considered his options, ultimately deciding to glean information with Mimeofacture on Celso's Carven Caryatid.

Why was this informative? Well, Tomohiro resolved the spell by taking Celso's deck and literally stripping every copy of every spell into their own piles. Thanks to the magic of Mimeofacture, un-timed rounds, and open decklists, Tomohiro was able to figure out Celso's entire hand through the process of elimination. If this sounds like a slow process, it absolutely was and Tomohiro received a slow play warning for his efforts.

But Tomohiro also got the information he was seeking; that Celso had no Remands or Voidslimes in hand. Celso got his deck-checked deck back and was free to continue playing. Celso spent his next turn playing Compulsive Research with one mana up, scrambling Tomohiro's information, then spending two life to play an untapped Breeding Pool. Clearly representing Remand, Celso passed the turn.

Tomohiro went for it anyway, tapping out for SSS. Celso revealed his bluff and the leviathan stuck. Celso spend the next couple of turns digging for answers but his ill-timed bluff shed a turn off his clock. At six life Celso was forced to attempt an SSS of his own, but Tomohiro had the Voidslime and they moved on to Game 2.

Tomohiro took out two Carven Caryatid and Mimeofactures, bringing in four copies of Bound/Determined. Celso chose to replace his Caryatids and Ribbons of Night with Plaxcaster Froglings and Vinelasher Kudzu.

Celso started with a bounce land and Compulsive Research, searching for his elusive early creatures. Compulsive forced him to discard two lands, cards he may have wished he had back as Tomohiro played a Farseek and triple Rolling Spoil. Undeterred, Celso continued with Plaxcaster Frogling and two Vinelasher Kudzu, while continuing to play more lands. 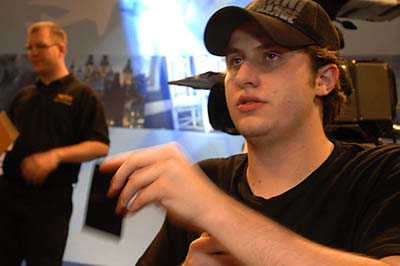 Carven Caryatid stemmed the beats for a bit, but received a quick Putrefy from the Brazilian. Tomohiro displayed unbridled indifference with his Simic Sky Swallower. Celso continued to lay lands, hoping to get his Kudzu to the 7/7 mark. Celso seemed eager to force SSS into chump-blocking mode.

Celso briefly considered trading a Kudzu when it reached 6/6, but decided with a Voidslime and Remand in hand to wait one more turn. Tomohiro took that turn and cast a Skeletal Vampire, leaving him a single card in hand. Celso attempted Voidslime and Tomohiro responded with Determined.

Celso looked for another blue source to cast Remand, but the Rolling Spoils had removed them. Celso was grudgingly forced to allow Skeletal Vampire into play. Off Determined, Tomohiro drew another Skeletal Vampire and Celso began to look sick.

Next turn SSS, one Vampire and a bat attacked for 10, shaving Celso's life points exactly in half. Celso desperately searched for that four-mana Plague Wind with Compulsive Research. Failing in that quest, Celso played a kicked Rolling Spoil, which eliminated all the bats and gave the untapped Skeletal Vampire a 4x regeneration shield.

All of Celso's creatures came in; the largest of which was blocked by the invincible and untapped Skeletal Vampire. Tomohiro's turn had a returned favor, attacking for 11 in the air, and winning the game and match.

With Willy Edel dispatching Shota Yasooka 2-0 in the B seat, it was all up to Tomoharu Saito and Paulo Vitor to determine the champions of Pro Tour-Charleston!