Fourteen rounds in total have been played, and these two players are all that remain. They've both achieved the weekend's main objective of making the French Worlds Team, but there is still the honor of being the National Champion, and the small matter of a thousand euros difference in prize. Before the match starts both players get to look at each others decklist, and Farid is once again in high spirits. Unfortunately, my French wasn't up to the task of translating his witticisms – it's nearly as bad as Farid's English. All that was understood was that Phantom Centaur s going to be pretty special in this match. 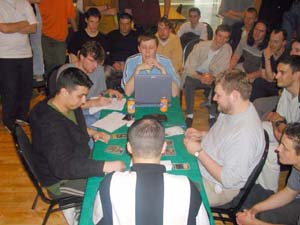 Once again Farid has a good draw. "I always get a good draw with this deck." He led off with a Cabal Therapy – "I really should have looked at your decklist more," he said. He asked for and was given a pen. "These things cost 1 euro normally, but I guess when you are going to make 2,000 euros they give you one for free."

Meanwhile Stephane was trying to ignore Meraghni's banter and made a pair of Nantuko Shades. Farid Smothered one and made a Squirrel Nest and a Wild Mongrel as well. The matchup certainly did appear to be in his favor.

Stephane dropped a Graveborn Muse and Shepherd of Rot. "What a combo," said Farid, and then "Not bad," as he drew Opposition. Stephane had just enough land to be able to play a Cabal Archon, and luckily for him, Farid managed to make a misplay to throw away the game.

In Stephane's next upkeep, Farid had the option to tap some number of swamps. This could force Stephane to use his Cabal Archon straight away, and there weren't enough Zombies and Clerics in play for Damizet to kill him. Instead he tapped three Swamps, and Damizet drew and played Withered Wretch for the win. If he had tapped four instead, Stephane wouldn't have had the mana to play a Cleric and sacrifice them all. If Farid taps the fourth Swamp, Damizet is presumably going to sacrifice a Cleric to his Archon, but this removes a potential attacker, and so Farid can tap another Swamp. The only other Cleric was the Archon, so Damizet can't win if he sacs it – Farid can then get one extra turn and if he drew a creature he would have had exactly enough to tap all of Stephane's blockers and attack for the win

Farid took out one Deep Analysis and three Cabal Therapy for his Phantom Centaur, and Envelop. Stephane took out Oversold Cemetery for Duresses.

Farid kept a one land hand, but with a Llanowar Elf and a Bird of Paradise. His Squirrel Nest was Duressed and his Elf killed by Chainer's Edict. Even so it wasn't enough to stop his draw being a good one, he cast Quiet Speculation and made Roar of the Wurm on his third turn, and Phantom Centaur on his fourth. This draw was totally unbeatable by Stephane who had to start chump-blocking from turn five. After a Graveborn Muse and Withered Wretch threw themselves in front of the Roar of the Wurm, he died anyway to the Centaur.

So the French title all came down to this one last game – and it was a good one. Stephane started with a Withered Wretch which was Smothered, then made a Stronghold Assassin. Farid took two from it as he made a Squirrel Nest.

Damizet played a Graveborn Muse. Farid replied with a Llanowar Elf and Quiet Speculation for two Roar of the Wurms and a Cabal Therapy. It didn't matter that Farid didn't use the Therapy straight away since Stephane topdecked Withered Wretch and removed them all. "Perfect – you are the French Champion," complained Farid. This seemed a little premature as he played Phantom Centaur on his next turn.

Stephane could only play a Rotlung Reanimator and pass the turn. Farid attacked him down to 12 and said go. It appeared that Stephane needed either a Mutilate or a Cabal Archon immediately. He drew neither and attacked, knocking Farid to twelve and killing a couple of squirrels. 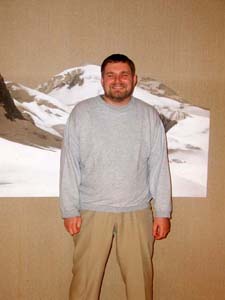 Farid's attack knocked Stephane to four. With four Zombies in play and Graveborn Muse in play he had to get rid of one, so he used Stronghold Assassin to sacrifice Rotlung Reanimator at end of turn, and then the token in his upkeep. The cards he drew gave him the card he needed – Cabal Archon. His attack killed all of Farid's men except Phantom Centaur, and Stephane had also drawn Chainer's Edict. Farid drew his last card and scooped.

A quick look at the last turn reveals that Stephane made a mistake and got away with it. He had no relevant cards in his hand going into the turn. To survive he has to draw Mutilate or Cabal Archon. If he draws Cabal Archon then he can't kill Farid immediately, and will only gain enough life to go to 7. Farid can then attack and as long as he doesn't use Squirrel Nest, there will be no legal targets for Stronghold Assassin – meaning that Stephane will die to his own Graveborn Muse. What he should have done was sacrifice the Muse in his upkeep instead of the token, then Cabal Archon is a guaranteed win. It didn't matter in the end as he got both Cabal Archon and Chainer's Edict for the Phantom Centaur.

Over the course of the weekend, though, Stephane has proven himself to be a very good player, going 10-2 in the Swiss including one concession to a friend, then beating the best France had to offer in the top eight. Congratulations to Stephane Damizet – Champion of France !