Dutch chose to kick off, continuing their strategy of forcing their opponents to settle into their colors first so the Dutch could react to those and get favorable matchups. (I know, it sounds counterintuitive, but that's how it works.) In this draft, the Dutch strategy seemed to work to perfection, since it ended up forcing the Japanese to shift their own proactive strategy to the exact opposite of what it had been. 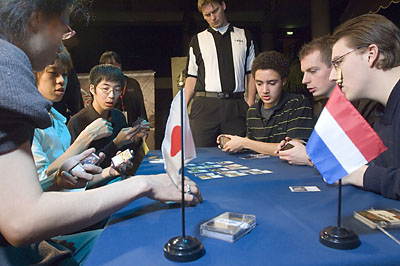 The Dutch and Japanese National Teams gather around the draft table for a rematch.

Coming into the draft, the Japanese had always tried to place green in seat A, blue in the seat B, and black in seat C, at least in part because this strategy allowed them the greatest chance of drafting a mono-black deck. Their strategy was obviously highly successful during the Swiss rounds, since they were the first team to clinch a spot at Sunday's table. In fact, the Japanese put the Dutch on the brink of disaster in yesterday's penultimate round before offering an intentional draw and telling the Dutch, "See you on Sunday." The Dutch won their final round against Portugal, and that's exactly what happened. 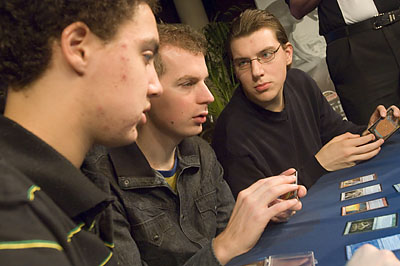 However, the Dutch apparently learned a few things in their first go-round. To start the draft, Mori was in blue-red, Katayama was drafting black, and Yamamoto was busy picking up white cards. The Dutch put van Medevoort, who was directly in front of Katayama, into black-red, cutting off the best of the supply to the Japanese runner-up. This caused Katayama to start picking up more red cards than he would normally like, while Mori was pushed out of red and into blue-green instead. This chain of events lead to Yamamoto's deck being a bunch of white cards and some hate drafts, as he scrambled to both protect his teammates from opposing bombs and pick up enough playables to hopefully pose a challenge to van Medevoort's growing monster. On the Dutch side of things, they set up Julien Nuijten to draft green-white, while Kamiel drafted heavy blue with a smattering of white himself.

The matchups ended up as: 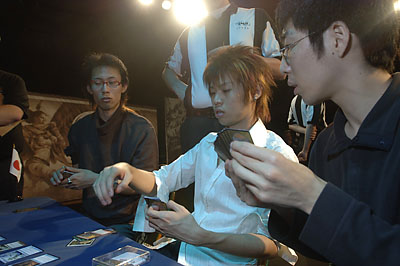 Seat C for Japan was a total mess, compounded by the fact that van Medevoort's deck was a beastly black-red concoction with highlights such as three Strangling Soot, Sulfurous Blast, Phthisis, Subterranean Shambler, and two Grapeshot. Both teams were agreed that barring something horrible, the Dutch would win that one. However, the other two matches looked reasonably close. Nuijten's green-white deck seemed to be at a slight disadvantage to Katayama's black-red, but Julien had Akroma, Angel of Wrath in his pile and plenty of fat and acceleration, so him winning would not be a shock.

It was the middle match between the two National Champions that looked to be a complete toss-up. Mori had two Looter il-Kor and plenty of solid creatures, while Kamiel had a reasonably average blue-white deck. If I had to give a nod to either side, I'd say the Dutch came out slightly ahead in the draft, but it was how the cards came up and were played that would determine things. This match was still anyone's to win.