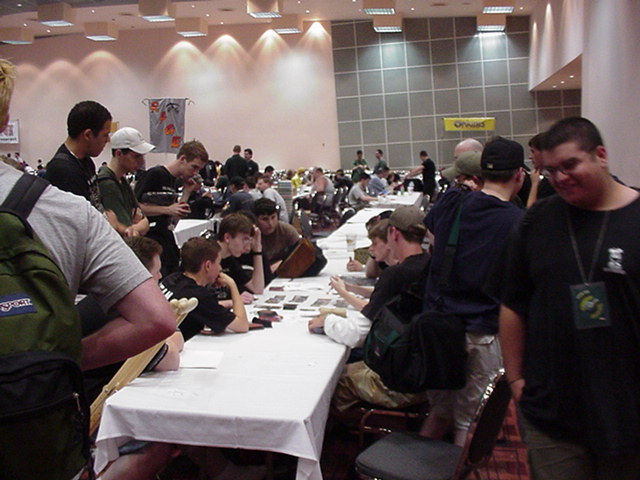 If the swiss rounds were to be any indication, Team TOGIT have the advantage in this, the final five-on-five brawl. The Eggheads were definitely at a disadvantage, as both teams agreed that Borteh's Type 1 deck was no match for Kasliner's mono-blue monstrosity.

The IBC match was the first to get underway, and was a battle of Verdicts, with Kenny Hsiung getting the upper hand over Osyp Lebedowicz by finding Phyrexian Arena.

Fortunately for TOGIT, Masques Block Limited was going their way. Adam Horvath had his Lieutenant working, and then played Kyren Negotiations. The game was his in short order.

The first classic game was over in the blink of an eye, with Kasliner extending his streak to 15-0. Next to him, a dire situation in the Sligh on Three-Deuce matchup was rectified when Patrick Sullivan played Ball Lightning and then Fireblasted. And at the far end of the table, Osyp had dropped back-to-back Voices of All and outraced him. Suddenly TOGIT were up a game in four of their matches. They started celebrating.

The first game of the fifth match went to the Eggheads when Randy Wright put Armadillo Cloak on Dromar. Said Dan Ksepka, "What am I supposed to do? Just kill me."

Then the tables started to turn. A Borteh Negator took Kasliner downtown. Sullivan had left his opponent with just a Cursed Scroll in play, but kept missing with his own, giving Jason Means the time to drop two Sanctimonies. Osyp fell to a pair of Spectral Lynxes. Then Borteh stole a second game with Negator. With the Eggheads also up 2-0 in Invasion Sealed, it looked grim for Team TOGIT.

Osyp won a quick one to rally the troops, outracing Hsiung with double Death Grasp. Kasliner dropped Masticore after no-permanenting Borteh via his Negator. Osyp had Spiritmonger in play. Even though the Masques Sealed match had evened at one apiece, things finally seemed to be going right for TOGIT.

But Borteh was not to be denied. He ripped three land off the top, then Hymn to Tourach to empty Kasliner's hand. Kasliner responded with Fact or Fiction, and Borteh had the Pyroblast. The Eggheads had taken a match, and from a very unlikely quarter.

They kept the pressure up. Hsiung's regenerators and Desolation Angel forced the IBC match to a deciding game. Cateran "Elbows McGee" Enforcer showed up for their team and took the third Masques Sealed game.

Sligh did what it does, despite a Sanctimony from Means. Then it did it again, this time facing two. To pull it off, Sullivan had to play all four Price of Progress in one turn. The Team Standings were 1-1.

Osyp lost a heartbreaking Game 5 to a seventh-turn Desolation Angel, leaving only the two limited formats. Then, a blazing start from TOGIT's Dan Ksepka. Fertile Ground and Temporal Spring gave ample tempo, and smoothed the way for Tek and a Hasted Serpentine Kavu to his opponents empty board. He had removal for his blocker and a Jade Leech in reserve. It was 2-2. The Masques Sealed match would decide the victor.

It was 2-1 favoring the Eggheads. Horvath had just skirted disaster with a timely Aura Fracture for John Kenny's Parallax Wave. However, Kenny had kept himself a number of cards up, and after trading a couple of creatures, he was able to force his opponent to play from an empty hand.