Granted, the decks that surround each player's set of Reckoners are very, very different. Larsson's aggressive take on UWR Flash was the last version standing in a tournament very much defined by the combination of the Azorius, Boros and Izzet guilds. Martell's take on Reckoner – in a deck that has Sam Black's fingerprints all over it – is a synergistic shell of Humans and sacrifice effects.

Before you read this recap, if you haven't already devoured the tales of both players' semifinals matchups, do yourself a favor and do so. It's nearly impossible to do their Game 5 victories due justice in a recap, and the impressive fashions in which they won are stories we'll be telling for years to come.

But the real history will be the winner of this match. Each vying for their first Pro Tour win and a hefty chunk of pro points, only one would be remembered as the Champion of Pro Tour Gatecrash. 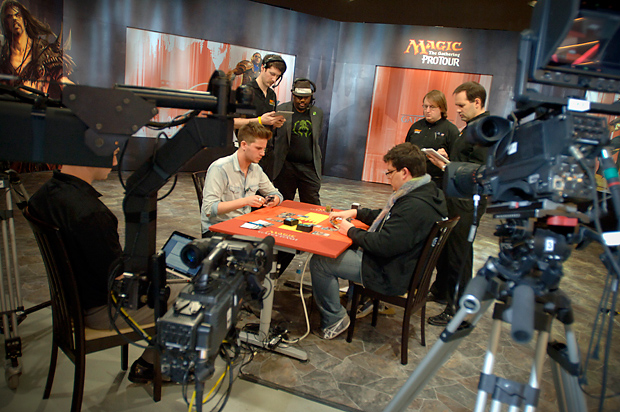 Joel Larsson of Sweden and Tom Martell of the United States are each just three game wins away from $40,000 and the title of Pro Tour Gatecrash Champion. Who will come out on top?

Larsson led off the first game of the final match with two copies of Augur of Bolas on successive turns, finding an Unsummon and Searing Spear to bolster his options and set up a defense.

Martell had a two drop of his own, albeit one stapled to less card advantage. Knight of Infamy looked less impressive when facing down two 1/3s, but Martell kept up the pace with a Lingering Souls, even if attacking into four open mana was a risk in the world of Restoration Angel.

Angel did indeed come down on Martell's first attack, but was quickly killed by Orzhov Charm. After combat, Martell flashed back Lingering Souls, a card that several Team SCG players said was key in this matchup.

This whole time, both players had taken a ton of damage from playing untapped shock lands, leaving Larsson at 10 and Martell at 14.

But the danger for Larsson passed quickly, as Blasphemous Act cleared off the board, forcing Martel to try and rebuild with a pair of Champion of the Parish that weren't long for this world. Falkenrath Aristocrat soon met a similar fate to Larsson's cornucopia of removal spells. 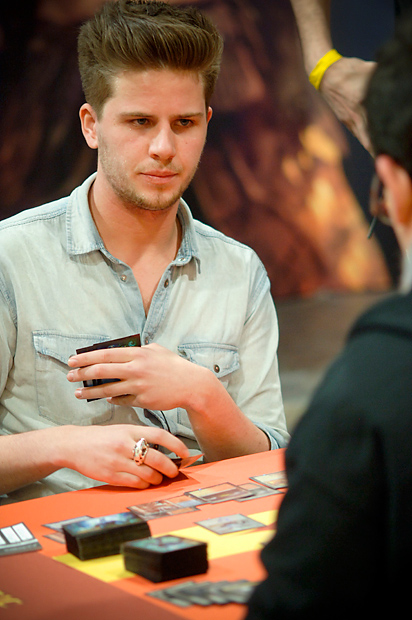 Larsson finally looked to go on the offensive when he found a Boros Reckoner waiting on the top of his library. With Boros Charm and Snapcaster Mage already in hand, and Martell at just 10 life, the Reckoner's attack was effectively lethal when Martell declined to block.

Larsson made a bit of a show of it, letting Martell resolve a Zealous Conscripts and attack, but eventually flashed in the 8 points of damage.

Larsson kept an odd looking hand for the second game, with Searing Spear, Moment of Heroism, and Boros Charm flanked only by lands. It improved slightly with a Snapcaster Mage, but Larsson clearly was saying that he trusted his deck to deliver the goods. And, as he sat in the Finals of the Pro Tour, it was hard to argue with that.

The Searing Spear was, at least, effective, killing a Silverblade Paladin that had first pumped and then paired with an early Champion of the Parish. The Champion grew again thanks to a Doomed Traveler.

That was when Larsson's deck did indeed start supplying the goods, as he drew Restoration Angel while killing Champion of the Parish with Snapcaster Mage plus Searing Spear.

But that only opened the door for Martell to play something pretty good as well: Obzedat, Ghost Council. 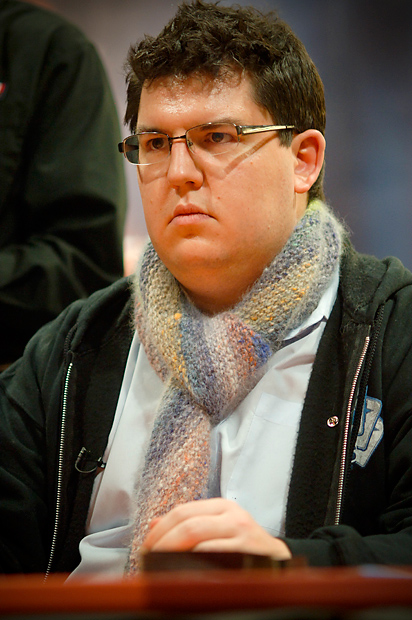 Martell seeks guidance from the council.

The Council immediately started draining Larsson, putting him on a quick clock and forcing him to react when Martell tried to clear out the Snapcaster blocker with a Tragic Slip. Restoration Angel attempted to save it, but a second Tragic Slip finished the job and let Martell attack freely with the 5/5. When even Moment of Heroism couldn't put Larsson out of range, Obzedat put the game away.

"That's a good creature," Larsson mused as he scooped up his cards.

"That he is. He's a good advisor," Martell said, of the Legendary Creature – Spirit Advisor.

Larsson kept another odd-looking hand, with only a plains and Cavern of Souls for mana to cast his Augur of Bolas, but he was immediately rewarded with a Glacial Fortress in his first draw step. Still, he had several red cards in hand and no way to make red mana.

Martell once again had a one drop in Champion of the Parish, but it was immediately outclassed by Boros Reckoner. Martell then re-trumped him back with a Knight of Infamy, a card that could effectively play around Boros Reckoner. 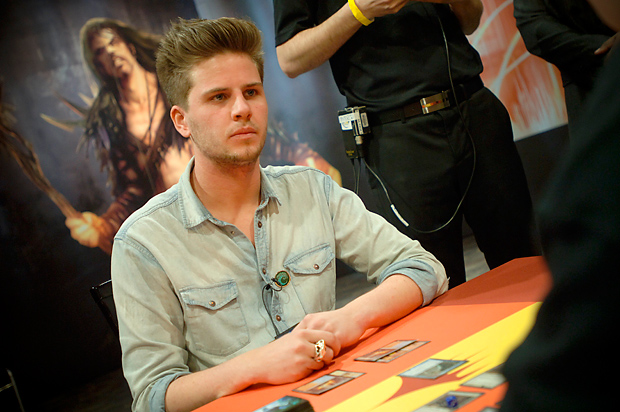 Larsson looks on, fighting off multiple small creatures with his burn spells.

Well, if it didn't die to Pillar of Flames, that is. From the red mana Larsson had drawn in successive turns, Larsson's removal had quietly become quite live. He clearly knew his deck and trusted it to deliver, even when it had just failed to do so in the previous game.

The board stayed relatively even as Boros Reckoners traded the following turn, leaving Larsson with just an Azorius Charm and Pillar of Flames in hand, with Doomed Traveler and Augur of Bolas facing off.

But Martell wasn't done. A Champion of the Parish and Boros Reckoner gave him a board presence that finally trumped the 1/3 across the board. 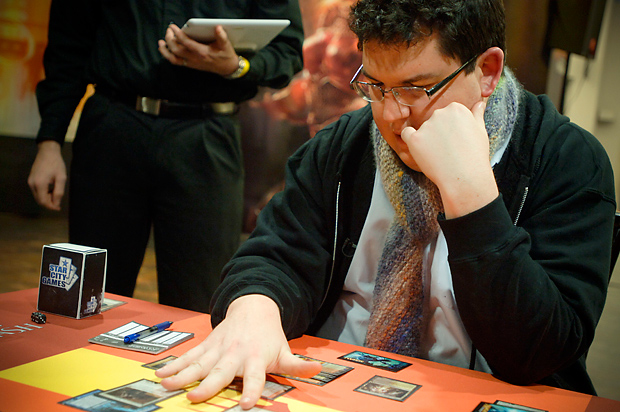 Martell works to survive until the more powerful members of his aristocracy make their appearance.

What it didn't trump was Thundermaw Hellkite of the top of Larsson's deck. The hasty dragon immediately flew at Martell, sending him to just three life while Larsson still stood at a healthy 17.

Falkenrath Aristocrat accomplished two things. One, it gave Martell a sacrifice outlet to turn Doomed Traveler into a blocker. Two, it let Martell quickly start pressuring Larsson's life total. It was, basically, the perfect card for the situation.

Larsson fell to 10 on the attack and was suddenly in a tight spot. He swung in with Hellkite and Augur of Bolas, hoping to race against Martell's team that was, for the moment, a point short of lethal damage. But when Martell regrew a Doomed Traveler with Orzhov Charm, it was exactly enough to push the match in Martell's favor.

By this point, Martell's playoff matches were following a similar pattern. He gets beat soundly in the first game then storms back to win games two and three. If the pattern holds here, then we should expect a Martell victory here, earning him his very first Pro Tour win and a victory for Jon Finkel's scarf that we'll be sure to remember.

On his way to that particular ending, Martell got exactly the start he wanted, playing three copies of Champion of the Parish on the first two turns, giving him the ability to fight through Larsson's Augur of Bolas.

Or, at least it would have were it not for Searing Spear killing the largest Champion. As a consolation, Martell removed the offending Merfolk Wizard with a Tragic Slip. 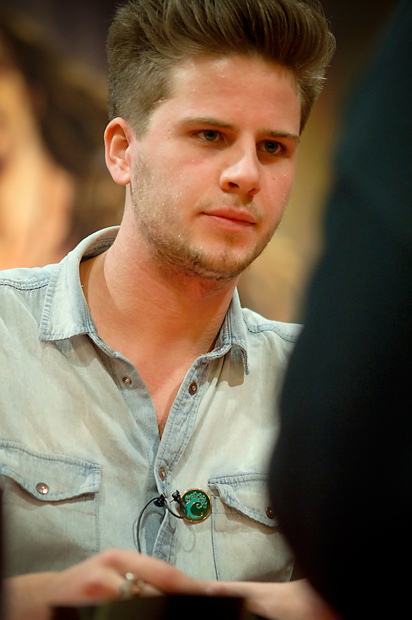 Larsson fights through a trio of Champions of the Parish, as he seeks to keep his Pro Tour Gatecrash Champion dreams alive in the Finals.

Undaunted, Martell charged with his two remaining Champions on his next turn, only to watch as the largest one died to Snapcaster Mage flashing back Searing Spear. As a consolation, Tragic Slip once again took out the potential blocker.

Finally free of the horde of Champions, Larsson was free to cast and start attacking with Boros Reckoner. He only had Azorius Charm for action in hand, but surely he could beat one Champion of the Parish.

Not quite. Martell quickly flipped the script and turned the race on its head with a Falkenrath Aristocrats. Azorius Charm stalled for a turn, but Larsson soon found himself at just 8 life and with no non-land cards in hand. Without help, he would be unable to race.

His draw step yielded a land. If only he got one more turn, maybe he could...

...die to a second, hasty, and very, very lethal Falkenrath Aristocrat. With no moves left to make and facing the unrelenting hunger of Tom Martell's vampire squad, Larsson was left with nothing more than to congratulate his opponent on the win. 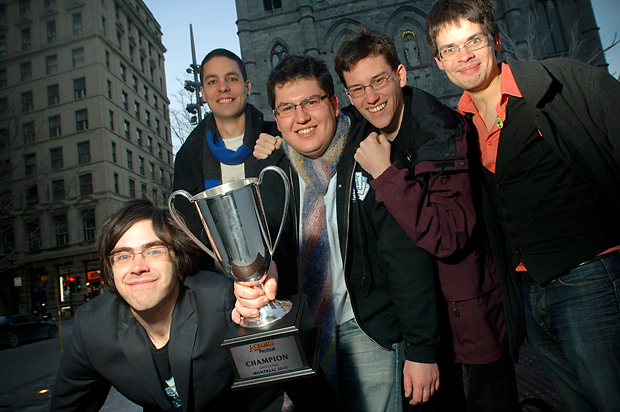