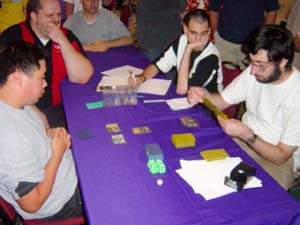 What it comes down to is that everyone loves Gab Tsang. Easygoing and from the Tour since way back, he's the player that most of the spectators hope will walk away with the title. There's a small, but vocal, group rooting for amateur Valentin Moskovich. He got this far without benefit of byes, and is playing mono-black control, demonstrated to be the most popular choice among Day 2 players. Tsang is with Speculation, designed and handed to him by David Rood. He played his first match of OBC on Day 1.

Moskovich started with swamp. Tsang answered with Study and thought hard. His hand was two Rootwallas, Deep Analysis, two Roars, Envelop, Wonder and forest. He pitched Rootwalla and Analysis and handed it back. Moskovich Edicted. Tsang dropped his forest and Analyzed into Catalyst Stone and another Forest. He thought hard at end of turn, but ended up discarding Rootwalla instead of Roar of the Wurm.

Moskovich played a mainphase Pact, skipping Rancid Earth to get to the Swamp he needed. Innocent Blood took out the Rootwalla. Tsang could manage only a Stone on his third turn. Moskovich liked the pace things were proceeding at. Tsang tapped out for Wonder, far from spectacular. Moskovich Scryed up three cards at end of turn, then dropped Cabal Coffers, Edict, and Shade.

The Canadian needed to get those Roars into his yard. He drew another Stone. No help at all. He put it into play and got ready for pain. Moskovich Pacted into Mutilate and busted Tsang for ten. He Reclaimed his Careful Studies at end of turn, hoping to increase his chances for an explosive turn. He drew Wonder to chump, and when Moskovich made no other play, ripped Mongrel. He busted it out, and both Roars, still with an island up for his last card, Envelop.

Moskovich made a second Coffers.

He pumped his Shade six times and Mutilated with six Swamps in play. Tsang Enveloped like Moskovich didn't have the second Mutilate. Moskovich shrugged and turned over the other one. 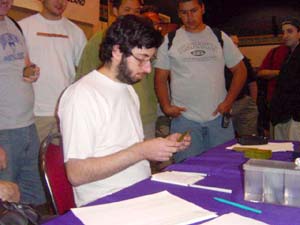 It shipped his whole team to the graveyard, and topdecked Wonder didn't even buy him a turn.

Moskovich had to mulligan for the second game, but his next six met his approval. Tsang started to pester him early with Wild Mongrel. Moskovich answered with Nantuko Shade, but Tsang was already moving up to Quiet Speculation for two Roars and an Acorn Harvest. Moskovich hit for five and passed it back.

That was a big opening for Tsang, ensuring he'd make it to four mana to play his Roar. Faceless Butcher answered it expertly. Tsang swung in and took care of the Butcher with a pitched Roar. He made another with Envelop open. Moskovich dropped his Coffers. His Shade put Tsang to nine and he tried a Diabolic Tutor. Tsang busted it with Envelop.

He untapped and pondered. His team crashed in to bring Moskovich to eight. Flashing back the Acorn Harvest put him to six. A second Mongrel, and he was done. Moskovich flailed. Rancid Earth deprived Tsang of his blue mana, and let Moskovich resolve a Mutilate that erased his Shade and most of Tsang's board, but left the Wurm intact. Next turn it brought him to two and was joined by a friend. Tsang was safe behind his other Envelop. Moskovich Scryed for one, found nothing, and turned over another useless Mutilate, conceding the game. 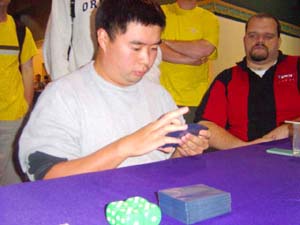 For the deciding game, Tsang sent back a hand of Upheaval, Speculation, Roar, Sylvan Safekeeper, Acorn Harvest and two forests. His next was acceptable, featuring both green and blue mana, a pair of Careful Studies and a Safekeeper. The first Study turned up a pair of islands that went straight to the bin. Tsang drew another island, then studied into an island and forest. Another pair of islands got lost. The Safekeeper showed up just long enought to be Blooded away. A topdecked Wild Mongrel fell to Edict, and then Tsang has only lands in hand.

Moskovich was thrilled, though not visibly so, to be under so little pressure. He resolved Diabolic Tutor, picking up Skeletal Scrying. Tsang drew another dud and passed it back. Moskovich Scryed for three and Tutored up Nantuko Shade. Tsang hit another land.

"I know you've got a Stupefying Touch." - Valentin Moskovich

He did not. Valentin dropped him to ten with the Shade. Tsang drew, and turned over his hand. All land. He'd drawn exactly four spells to go with what amounted to fifteen lands. Moskovich started to apologize, but Tsang would have none of it, congratulating his opponent on taking the title.