Finals: Welcome to the Lightning Round

n what was quickly shaping up to be the fastest Pro Tour Sunday of all time, the Sliver decks of Chris Lachmann and Jacob Van Lunen would be pairing off against the more traditional color archetypes of Kentaro Yamamoto and Yuuta Takahashi.

Chris Lachmann and Jacob Van Lunen have come this far on the backs of Slivers, but Kentaro Yamamoto and Yuuta Takahashi will not go down quietly.

The Japanese players had paired Kentaro with their blue-black control deck while Yuuta was running a more aggressive green-red deck splashing just enough white for some Pallid Mycoderms. The Sliver players, on the other hand, had opted to run a red-green deck and a blue-white deck using the strategy they had championed over the course of the weekend. That strategy represents the second time this year a relatively unknown contingent of American players has had success with an outside-the-box drafting plan derided by most pros coming into the event.

You'll recall Mike Hron's victory at Pro Tour-Geneva back in February, in which the Madison, Wisconsin native became the first American Limited Pro Tour Champion since Mike Pustilnik in 2001. His strategy throughout that weekend was to draft black cards, the only color many other pros wanted to avoid at all costs. His innovation earned him the champion's trophy and now, just five months later, another set of Americans was doing the same thing. Were we going to see a repeat of Hron's success here with Lachmann and Van Lunen, and a possible return to American dominance on the Pro Tour with two wins in a single season?

The Americans managed to win the die roll and opted to play, an early windfall for their very aggressive strategy. Lachmann led off with the first threat opening on Island, Screeching Sliver. His teammate Van Lunen had only a Mountain and appeared to have kept a hand without any Forests. The Japanese players, who didn't know how the Americans won their semifinals match but knew it had been quick, were sure to be happy not to see a turn-one Virulent Sliver. They opened on land, land, go, without a play.

For turn two, Lachmann made a Sinew Sliver, but Kentaro had a Midnight Charm on the Screeching Sliver in response. A Two-Headed Sliver made an appearance for Van Lunen, and the Sliversmiths were looking to put the beatdown on their opponents early.

The Japanese answered with a Thick-Skinned Goblin, but thanks to the Two-Headed Sliver, it wasn't going to be able to block until it had a partner to join it. They solemnly passed the turn, their expressions betraying nothing about what they felt of the game's progression so far.

After a few early turns, the life totals stood 28-21 in favor of Lachmann/Van Lunen whose board consisted of Knight of Sursi suspended with a single counter, a pair of Two-Headed Slivers, and Sinew Sliver to Yamamoto/Takahashi's board of Coalition Relic and a hardcast Veiling Oddity. The Thick-Skinned Goblin had met its death at the hands of a Chris Lachmann Erratic Mutation, and the Americans added a bomb rare Sliver to their board in Essence Sliver before attacking. The ensuing combat step brought the totals to 34-15 in their favor.

Things were looking very dire for the two Japanese players. Takahashi's Coalition Relic helped put a Verdant Embrace on his teammate's Veiling Oddity. During their opponent's upkeep the enchantment would create a Saproling, providing them with the second creature they needed in order to block any of the American's attackers and from there threatened to take over the game, allowing the Japanese players to stabilize.

They poured more salt on that wound during Lachmann's upkeep by using a Cancel to prevent the American's Knight of Sursi from entering play. The Americans looked nonplussed and quickly revealed why. A Sunlance from Lachmann aced the Saproling, leaving the Japanese players with only a single creature, unable to block yet again. Their follow-up play was a devastating Bonesplitter Sliver from Van Lunen, turning their weenie horde of Slivers into a terrifying mess of high-powered attackers. They quickly moved to the combat phase and turned all of their creatures sideways.

Kentaro and Yuuta were visibly disappointed at how the game had progressed, and Kentaro went so far as to extend his hand, which was quickly pulled back by his teammate. It looked like Yuuta wasn't willing to give in until he had checked for sure that the damage was enough. Van Lunen did the math for him: 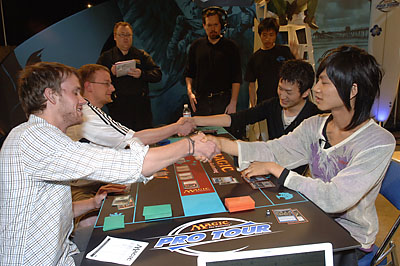 Left with no outs, Takahashi faced the cold, hard reality of the situation. It was official: the Slivers were lethal and Chris Lachmann and Jacob Van Lunen are the 2007 Pro Tour-San Diego Champions! 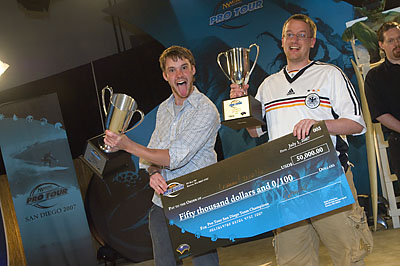