Another Grand Prix is near its conclusion. We are down to the final match. The players at the table are quite familiar – there is a U.S. National Champion Eugene Harvey hunting down his first career Grand Prix win. On the other side of the table, Zvi Mowshowitz is continuing the Your Move Games dominance of the Extended metagame. 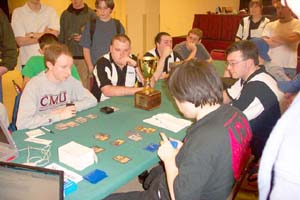 The game started off slow, with both players just dumping lands into play. Harvey did not bother to fight Exploration and then allowed Zvi's Gush to resolve as well. Gush was essentially free as Mowshowitz cast a second Exploration and replayed his lands. With no Horn of Greed in play, Harvey did not mind very much. Extra cards were made up for by the two Explorations in play, and the Gush's casting cost allowed Harvey to keep up with his opponent on the amount of mana in play.

Zvi continued to ride the card advantage, casting another Gush and then using Krosan Reclamation to shuffle both of them back into his deck. Harvey was finally prodded into action when Zvi attempted to cast Capsize with buyback on one of his lands. Harvey responded by casting Fact or Fiction. Like his opponent, Zvi seemed unwilling to counter any card drawing spells and let FoF resolve. Is that the new Carlos Romao school of Magic, or do the two players just understand the intricacies of this particular matchup well enough to know exactly what and when they need to save up countermagic for? Fact yielded Mana Leak and Accumulated Knowledge for Harvey, who continued to dig deeper into his deck with AK and a Brainstorm.

The first Counterspell of the match was cast when Mowshowitz attempted to draw three cards with an Accumulated Knowledge of his own. Harvey denied it, but allowed an Intuition to resolve. Intuition put two more AK's into Zvi's graveyard and one into hand. Before Zvi could untap, Harvey cast another AK, drawing six cards – then discarded back down to seven, turning the Stroke of Genius-like effect into merely a huge Cephalid Coliseum effect.

Zvi started off his turn with an AK for seven – which Harvey let resolve. Mowshowitz continued to ride the card advantage by dropping a Horn of Greed into play. Harvey used Mana Leak to counter it. Although Zvi had three lands untapped, he could not afford to tap out, not with Harvey controlling enough lands to set off an Upheaval. So he simply allowed Mana Leak to counter it and played out three more lands. Harvey's turn was a lot less exciting, as he simply lay a land and said "go." Mowshowitz flashed back Krosan Reclamation, shuffling a pair of Accumulated Knowledges back into his deck.

On his turn, Mowshowitz cast Gush and then Time Warp, both of which resolved. Zvi pulled a judge aside for a conference. "I do know this, but want to check anyway," he said. He asked whether Time Warp turns were cumulative. Of course, they were. Harvey seemed unwilling to fight over Zvi's extra turns, as he allowed a second Time Warp to resolve as well.

Zvi put those turns to good use, dropping lots more lands into play, taking the time out to Capsize one of Harvey's Islands back to his hand with buyback and then using Intuition to get back one of his AK's. After drawing six more cards, Zvi cast his third Time Warp and finished off the turn by trying to cast a Horn of Greed. Harvey finally found a use for one of his Mana Leaks and countered it, still controlling six untapped lands.

Mowshowitz started a new turn with a Scroll Rack, exchanging most of his hand for new cards. He finally managed to resolve a Horn of Greed, drew a pair of cards off the lands he played, and actually passed the turn back to Harvey, who did nothing better than play a land and draw a card from it. Zvi then cast another Horn of Greed and played out several lands, drawing most of what was left of his library. He used Krosan Reclamation to shuffle a pair of Time Warps back into his deck, then cast Accumulated Knowledge attempting to draw eight of the fourteen cards remaining in his library. That resolved, bringing Zvi very close to his infinite recursion goal – if only Harvey did not build up a sufficient base of countermagic in the meantime.

At this point the judges stopped the game, pointing out that the Accumulated Knowledge Zvi cast a few minutes ago should have been for seven rather than eight. During the swiss rounds of the tournament this could be a serious problem resulting in a possible penalty as harsh as a game loss. However, the rules are different once you get to the single elimination tables. As two judges were watching, the no ulterior motive was likely, the situation was simply fixed with having Zvi put the last card he drew on top o his library, also showing it to Harvey.

Zvi attempted to cast Time Warp. In response, Harvey cast and resolved Fact or Fiction, then resolved an AK (this time it was really for eight). There was nothing he could really do with three mana he had remaining, so he gave up the game rather than watch Zvi take the rest of the turns and play solitaire for another twenty minutes.

Exploration allowed Zvi to catch up with Harvey, who went first. Neither played did anything but play a land on their respective next turns, then Harvey cast a Duress. Mowshowitz responded with Intuition, which was countered by Mana Leak. 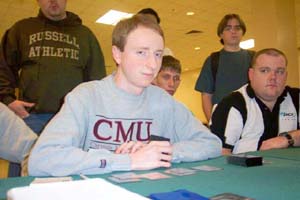 Mowshowitz revealed two Deep Analysis, Gush and Exploration. Harvey chose to remove Exploration. Mowshowitz played a pair of lands on his turn and cast Deep Analysis. On his own turn, Harvey cast Fact or Fiction. After one glance at it, Zvi proclaimed: "this will take longer than every other Fact or Fiction in this tournament combined!". He saw a monster five card hand of Island, Duress, Cunning Wish, Brainstorm and Counterspell. After about two minutes worth of deliberation, he offered Harvey the choice of Brainstorm and Cunning Wish or the rest. Harvey took the other pile.

Mowshowitz cast a second Deep Analysis from his hand, played two lands and flashed one of them back. Despite the powerful Fact or Fiction, he was once again well ahead of the curve on card economy. Harvey's Duress revealed a pair of Gush, Exploration, Intuition, Counterspell and the creature of the day - Battlefield Scrounger. Harvey got rid of Counterspell.

Zvi used Gush to draw a pair of cards, cast a second Exploration, replayed his lands and baited a Counterspell out of Harvey's hand by trying to cast a Ravenous Baloth. Harvey just played a land and Zvi repeated the process on the following turn – but this time the creature of choice of Battlefield Scrounger, and this time it resolved. It was Harvey's turn to spring into action. He used Intuition to search out three Accumulated Knowledges and cast the one he got to keep, drawing several cards. He then untapped and cast Duress, taking Capsize and leaving Zvi with Intuition and a pair of lands.

That Intuition eventually revealed a pair of Horns and Deep Analysis. Harvey figured that Zvi would be drawing more than just four cards with those Horns and gave him Analysis instead. No problem for Zvi – he cast Deep Analysis and drew the third Horn off of it. In response to Zvi trying to play the Horn, Harvey cast and resolved Fact or Fiction. He showed Swamp, Counterspell, Island, Capsize and Upheaval. Without a moment's hesitation, Zvi split Upheaval away from the rest of the cards. As this was Harvey's only Upheaval in the entire deck and his most awesome threat in this match, this was certainly a difficult choice. In the end, Harvey ended up taking Upheaval over the very alluring four-card pile. Horn of Greed resolved and Mowshowitz played out some more lands. He then attacked with Scrounger and used its ability to deal extra damage to Harvey, bringing him down to ten life points. Zvi finally flashed back his last Deep Analysis, ending this very long turn with a hand full of cards.

Harvey used Cunning Wish to find Vampiric Tutor, then cast that to fish out Psychatog. Harvey played a land to draw an extra card, then added all of his mana into pool and cast Upheaval with three mana remaining. Zvi returned three tapped Islands to his hand to counter it. Harvey used the remaining mana to cast Psychatog. Although there was no more Upheaval problem, Zvi could get in serious trouble with that Tog – one attack could be lethal. Mowshowitz' solution to this was simple yet brutal – try not to let Harvey have any more turns after this one. He drew yet more cards with Horn of Greed and cast a Time Warp. He then played a Scroll Rack, activated the Scrounger to send Time Warp and a pair of other cards to the bottom of his library, then shuffled more Time Warps back in with Krosan Reclamation. 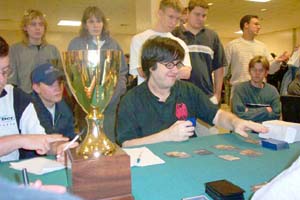 Zvi drew a million cards and looked at about a million more next turn – but he failed to find another Time Warp and was eventually forced to pass the turn to Harvey. Harvey used a Cunning Wish to find Shadow Rift. This finally initiated a counter war – with Zvi using Gainsay to counter the Rift and then using Counterspell to counter Harvey's Counterspell. In the end, Psychatog was still attacking but did not have Shadow. Zvi blocked with Scrounger and pumped it up, forcing Harvey to remove a bunch of cards in his graveyard from the game. After damage was placed on the stack, Zvi used Scroll Rack to try and find Capsize. He was successful and cast it without buyback to return Scrounger to his hand.

Having forestalled death for the turn, Zvi started off his own turn with a Horn of Greed, then played four lands and drew eight cards. With eleven cards remaining in his library, Zvi used a Scroll Rack to find all of his Time Warps. With something like twenty lands in play, Harvey could never outcounter the combo and once again, conceded the game rather than forcing his opponent go through the motions.

Zvi Mowshowitz finally achieved his dream of winning a major tournament with Turbo-Land. The world is scheduled to be ending shortly.