Two days, 201 teams, 603 players, and they have been bashed, smashed, screwed, and booed until there were only two teams, six men, and a lot on the line. This is not just a Grand Prix. An invitation to the Team Masters event is also on the line, where many, many dollars are to be made. The two teams are very tight- Illuminati just missed the last Team Masters, and Kyle Rose had supposedly quit, but who could say no to a Masters invitation? 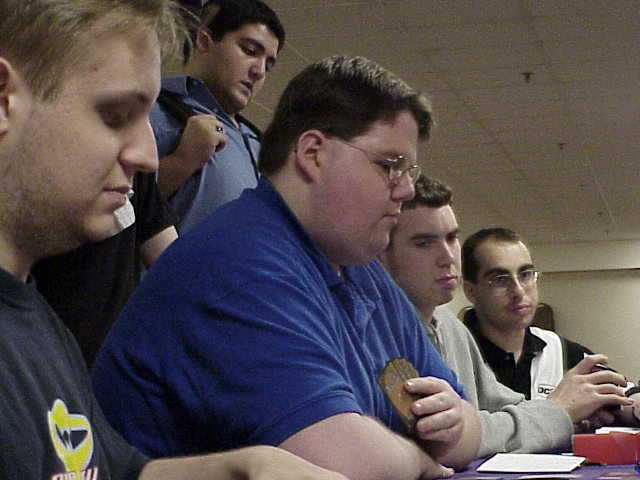 In the middle "B" seat was the match of matches, Kyle Rose against Zvi Moshowitz, in a white/blue on blue/green death match. This is a swing match, a crucial event in the middle, the vortex of clashing competitors. Each team had a great matchup, and each team had a poor match up. This one was up in the air, and all the marbles could come down to the two men before me.

Zvi opened up with a turn three Puppeteer, and held back Rose's Mystic Familiar, patiently waiting out Kyle. He was shying away from playing spells in fear of Syncopate. Kyle added an Aven Fisher, and then tapped out to cast Deep Analysis, letting down his guard- a hole Zvi exploited by slipping Springing Tiger into play.

Kyle Rose came back with a Wormfang Crab, a defiant threat. It would be neutralized by the Puppeteer, but not this turn. Zvi tapped all his lands and cast an enormous Breakthrough for six, leaving him with seven cards in hand, and forcing a discard. The card Zvi chose to discard happened to be Basking Rootwalla, and he seemed to have caught up to Kyle, who was pulling ahead with a Deep Analysis flashback.

Kyle had nothing on his turn, and Zvi did the closest thing to exploding that a non-explosive blue green/deck can do. He started off with a Krosan Archer, Chatter and the flashback, and then a Nullmage Advocate.

Kyle finally reached seven mana, and just dropped that big old Phantom Nishoba right on the table. Zvi was a little taken aback, but managed to remember that he had Puppeteer in play. Zvi tapped down the potential blockers when his Puppeteer got bounced by Dematerialize, untapped, bounced with Ghostly Wings, and sent with five monsters. Keep Watch put Zvi deeper into his deck.

The 'Nish came back down, and eventually the Dematerialize was flashed back. Zvi couldn't catch back up and soon the 'Nish was putting the damage race further and further away. Soon it was two to twenty, and the game was Kyle's as a matter of course.

Alex Shvartsman and Norman Woods were going to game three, and Justin Gary and Eric James were also going to game three. Justin, having just seen the end of Zvi's game, commented "Lets just win our games and not have to worry about this."

Unfortunately for Zvi, the second crucial game of this match was a non-match. He was completely stuck at three lands, and was crushed by Kyle Rose's ability to cast spells. As it turns out, Alex won his match, and Justin was also a little mana shy, and fell. Interestingly enough, the bad match up for Illuminati was Alex's, and the good match up was Justin's. As it was, luck played a factor, but that is part of Magic's magic. Kyle Rose, Norman Woods, and Eric James are Grand Prix New Jersey Champions.