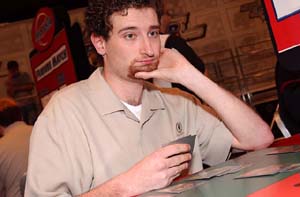 One of the most exciting events of the weekend was the battle between the game's creator and the man known as Jonny Magic. Late in 2001, Wizards of the Coast released a box set pitting the two celebrities against one another in a test of deck building skills. The format: Ice Age/Alliances constructed. The restrictions: each player could use only four rares, with each rare being unique to the deck. Then, they could add 12 uncommons, but have no more than two of any uncommon. In fact, no more than two of any common could be played either. In addition, only cards which were legal under the reprint policy.

Both players set forth to build decks, knowing that sometime in the future, they would play for bragging rights under the lights of a Pro Tour stage. Jon evaluated the format carefully, initially leaning towards a deck featuring blue. Quickly though he discarded this notion, and instead went straight for the throat with Black/Red. Finkel valued the removal spells available to this color combination (such as Pyroclasm, Incinerate, and Dark Banishing), and anticipated that Richard Garfield would build a green creature based deck which his deck would eat alive. 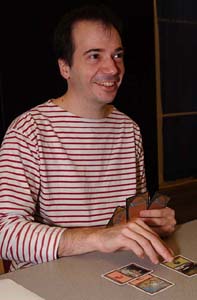 Richard conferred with some of the brightest minds in Magic R&D to make his build. He knew of Jon's love of blue, and constructed a Red/Green deck designed to hose the color of island, with such cards as Thoughtleech and Pyroblasts. Then the rules changed: since there were no sideboards, players were not allowed to use color hosing cards. This changed Richard's deck for the better, as he substituted Giant Growths and Giant Trap Door Spiders for the aforementioned cards.

In the end, these are the decks they brought to play: