Carlos Romao won Grand Prix Rio, and is looking to build on his reputation with a strong showing this weekend. Grand Prix Rio was a Limited event, although unlike today, it was Booster Draft. Today will be Rochester Draft, and the new element of Apocalypse is sure to disrupt most players plans. Will today's players aim for consistency in mana, or will they stray into four or five color decks with many power cards and shaky mana ratios? This is a question that will define the Invasion Block Limited format up through Worlds, and this event along with APAC and Euro Championships will set the standard for the strategic dilemmas it presents. 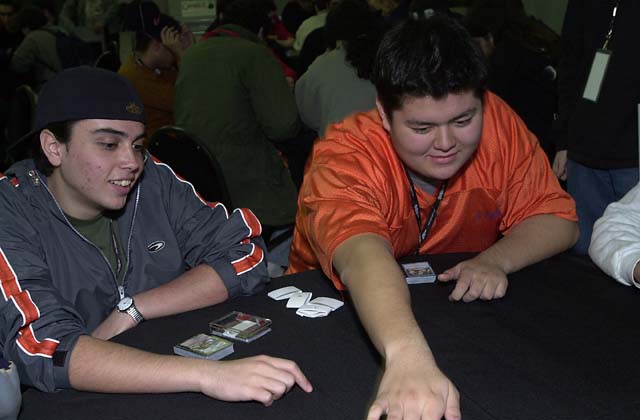 Romao has incredible reachCarlos was placed into the first seat during this draft. He opened a pack heavy in blue cards, which included Repulse, Rainbow Crow, Faerie Squadron, Urborg Emissary, Stand/Deliver along with Kavu Climber, Aggressive Urge and Duskwalker. Carlos decided it was worth it to fight for Blue with the rest of the table, and took the Squadron. This seemed questionable at the time, not just because he turned down Repulse, but also because Kavu Climber would have put him far away from the other players at the table who would be drafting mostly Black and Blue cards.

Things got even more strange in the second pack, where Carlos wheeled Kavu Aggressor and Raging Kavu, even though Joao Lima to his right was clearly signaling Green/Red with Frenzied Tilling and Might Weaver. The third pack saw Carlos wedged even further between drafters of the same colors. Joao took a Llanowar Knight to cement himself into Green, and Carlos took a Fertile Ground. Henrique Pessini to Carlos' left wheeled Rogue Kavu and Llanowar Vanguard.

The fourth pack saw things look a little better for Carlos in terms of his neighbors' colors. Joao took a Crimson Acolyte, Carlos drafted Slimy Kavu, and Henrique went into White with Wayfaring Giant. At this point, Carlos had not touched Blue since his first pick Faerie Squadron. The next pack showed how much he was getting cut off in Green and Red, as Charging Troll, Ancient Kavu, Nomadic Elf and Llanowar Knight were taken in succession. Carlos saw the writing on the wall, and decided it was time to go back into Blue. He drafted Exclude fifth pick, which is quite good for a card of that caliber. 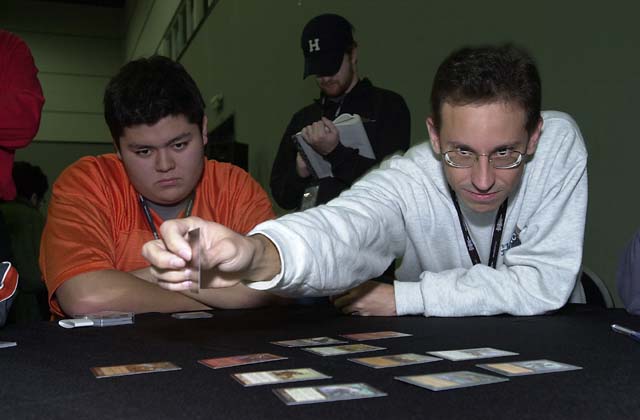 In the sixth pack, Carlos went right back into Red and Green, taking a Yavimaya Barbarian. At this point, he was locked into Green/Red/Blue. The next pack presented a choice of Shivan Emissary or Shoreline Raider, The Emissary is obviously the most powerful card, but it would require Carlos to go into a fourth color. Instead, he simply took the Raider, which is still a very solid creature. The final Invasion pack saw Carlos get a second pick Pouncing Kavu.

Planeshift was opened next, and Carlos took an eighth pick Quirion Explorer, wheeling Sisay's Ingenuity over Primal Growth, which would have expanded his four- and five- color capabilities. In the following pack, Carlos took Stormscape Familiar over Natural Emergence, and wheeled Stratadon. The Emergence could have been quite good in Carlos' deck, but at the time he only had one Enchantment in his deck. The next pack saw Carlos draft Sea Snidd over Quirion Explorer, and he then wheeled a late Treva's Charm; hinting at the possibility of splashing White in the future.

The next pack was opened, and it was a good one. It contained Flametongue Kavu, Lashknife Barrier, Tahngarth, Talruum Hero, Confound, and other solid spells. The powerful Red spells were picked up quickly, and Carlos took the Confound. He then wheeled a late pick Terminal Moraine, which would stabilize his mana base, and perhaps help out a fourth color splash later. In fact, the following pack presented the opportunity to go into a fourth color in the form of Sunscape Battlemage, which would have been great in Carlos' deck. However, he stuck to consistency, and went with Slingshot Goblin. Another interesting aspect of this pack is that the player who opened it took Lava Zombie over Magma Burst. The Burst almost made it all the way to Carlos, but it was picked up by Henrique, who was on Carlos' left.

Mire Kavu was drafted by Carlos in the next pack, but it was unamazing due to the lack of Black cards in his deck. The same pack gave Carlos a fourteenth pick choice between a second Terminal Moraine and Implode, and he took the Moraine to smooth out his mana base even more. The following pack saw Carlos tempted again to go into a fourth color, as he had the opportunity to take a second pick Lashknife Barrier. However, he still felt that he didn't have enough mana fixers, and took an Amphibious Kavu. Carlos opened the next pack, which contained Terminate, Radiant Kavu and Fleetfoot Panther among other things. All these powerful cards would require Carlos to go into a fourth color, and he took Stone Kavu instead.

He opened the first Apocalypse pack as well, which contained Anavolver, Jilt, Goblin Legionnaire and Minotaur Illusionist. Carlos took the Illusionist over Jilt, which is a hard choice to make. At this point it became obvious that most players had not set themselves up very well for the Apocalypse booster. Zombie Boa and Tundra Kavu were drafted before Jilt and the Legionnaires, which went sixth and eighth respectively. This aspect of the table became even more apparent in the second booster, where Carlos drafted an eighth pick Jilt, and wheeled a Tundra Kavu. A Legionnaires went tenth in this pack as well.

It was apparent at this point that Carlos had spent the first two packs setting himself up for Apocalypse. By taking three colors which were not entirely allied, he was able to access two enemy color combinations instead of one. This allowed him to pick up three Jilts in total, as well as Quicksilver Dagger and Temporal Spring. Carlos' deck has a ridiculous amount of tempo advantage and a ton of removal. This deck is fully capable of going 3-0, and in the hands of a Grand Prix winner, it can probably achieve that.