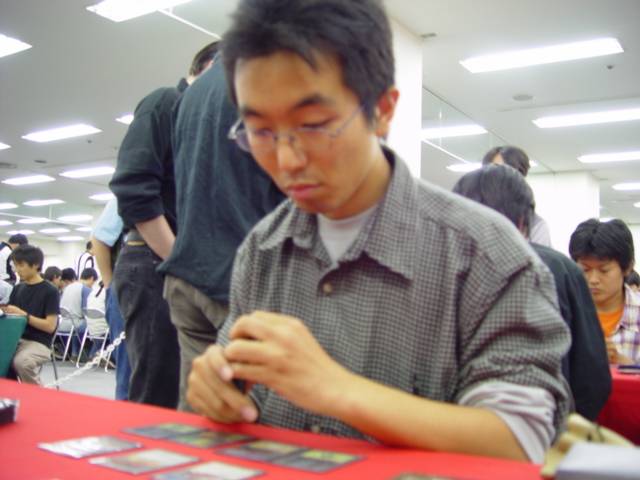 The players at Table 2 eyed each other warily as they sat down to draft. All 5-1, each of them wants to pick three wins, putting them in range of the Top 8. Competition at Table 2 is usually the highest in the draft, with a large compliment of skilled players, but with this year's pairings based on yesterday's Standard results, this was not the case. The only name players here are Itaru Ishida and Masayuki Higashino. Still, the fact that the others made it to the Nationals means they can't be underestimated.

8th pick: Chatter of the Squirrel. Other picks: Dematerialize

"It's going to be an uphill battle." This was the only comment Ishida was willing to give about his deck. He started out trying to make a UG deck with Odyssey, but wasn't able to pick up any decent green, and eventually switched to black in Torment with Crippling Fatigue. This proved to be a good choice, as he was able to get a Balshan Collaborator and Gloomdrifter, and added to his blue with the solid Hydromorph Gull. However, the blue and black dried up after that, leaving him with suboptimal support cards. Unfortunately for Ishida, he was stuck between Sasahara, drafting UW, and Higashino, who was forcing RB. Ishida continued with blue-black in Judgment, but branched into green with his third pick, Nullmage Advocate. In the end, this worked out for him, enabling him to put together a UG deck with a splash of black. In hindsight, he expressed regret about not taking the Compulsion and Basking Rootwalla from his Torment packs. In the end, Ishida said "I don't know if the packs were weak, or if people were trying to cut me off from my colors. I just wasn't able to open good cards."