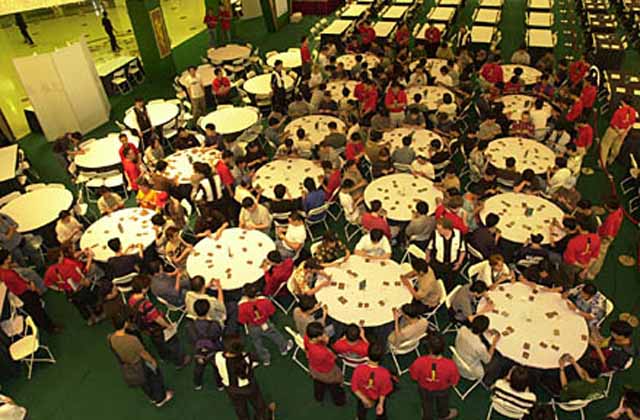 Three men competing in the 2000 Asia Pacific Championship have represented the APAC region at the Magic Invitational. When the first draft began Friday morning, two of them were sitting next to each other. Toshiki Tsukamoto is the grandfather of Japanese Magic. He was the first Japanese player to gain worldwide respect for his performance on the Pro Tour. He earned a lot of that respect when he competed in the 1998 Invitational in Rio de Janeiro -- the first Japanese player ever to play in the event. Tsukamoto is a two time Japanese National champion and a three time national team member. He also owns Off Beat, which is the main store in Tokyo where Tokyo pros hang out and playtest for major events. 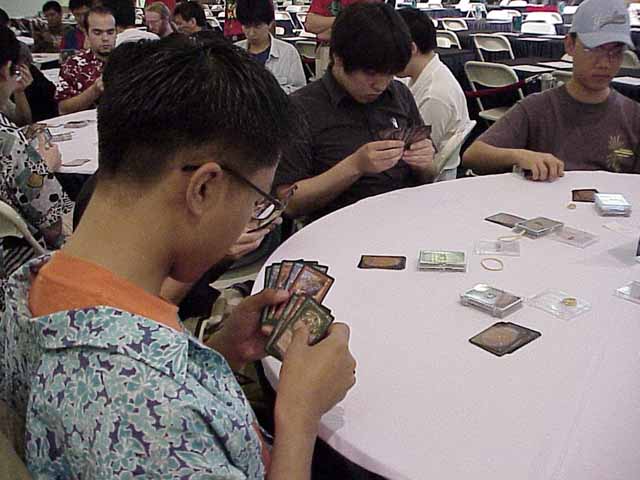 One of the players that spends a lot of time at Off Beat is Koichiro Maki. Tsukamoto has been Maki's mentor over the years. Maki has not yet won any major events (with the notable exception of the Hong Kong open the last time the APAC championships were held in Hong Kong (1997)), but Maki has a reputation as a consistent high finisher. His consistency got him invited to last year's Invitational as the APAC player with the highest DCI rating.

Tsukamoto was feeding Maki for the first draft. Tsukamoto opened his first pack and saw Stinging Barrier looking back at him. Since he likes to play controllish decks anyway, this was an easy pick. Tsukamoto followed it up by taking Rishadan Brigand over Silverglade Elemental and Invigorate. He obviously wanted to cut off his own color and simultaneously suggest a color to Maki so Maki wouldn't fight him. Maki first -picked a Maggot Therapy (over Arms Dealer and Snorting Gahr). He then took Lunge second (over Hunted Wumpus, Thermal Glider, and Cho-Manno's Blessing). Thermal Glider's stock has obviously fallen a lot since Prophecy came out. 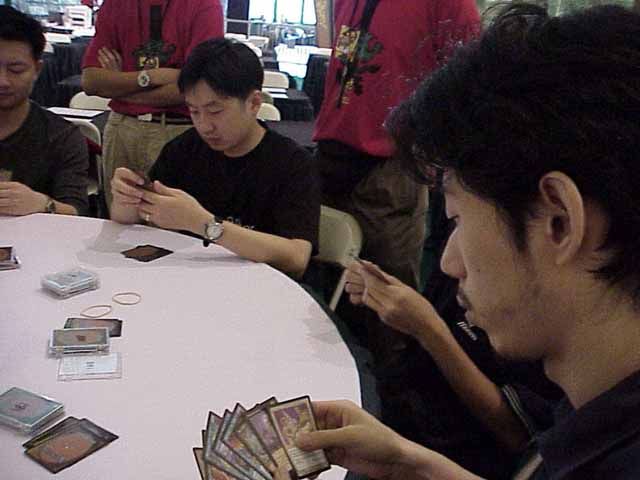 Despite having already passed a Gahr and a Hunted Wumpus, Maki couldn't help but go green once Tsukamoto sent him such a clear signal. Maki drafted Silverglade Elemental third and then followed it up with two Snorting Gahrs. Tsukamoto didn't take great cards when he passed those Gahrs, but it was textbook drafting. He saw wanted to situate himself into white and blue so he drafted Pious Warrior, Devout Witness, and then Fountain Watch. I was surprised he took Pious Warrior over Cho-Manno's Blessing, but he seemed to have an archetype in mind that required him to draft good blockers so he could use low-power fliers to win after a long game. Maki never saw much in the way of black cards after that first pick maggot Therapy, but there were some decent red cards left over late so he dipped into red for Wild Johvall, Flaming Sword, and Battle Rampart.

Going into Nemesis, Maki seemed to be working on a great red/green deck while Tsukamoto had a mediocre blue/white deck, but had done a lot of work setting himself up for future packs. 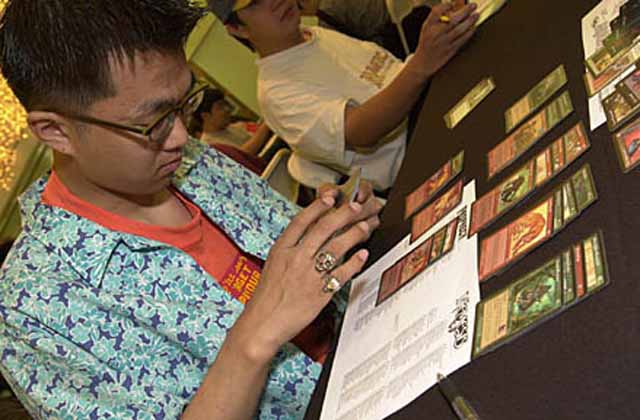 Maki opened a great pack, but not a great one for him. His choices included Parallax Wave, Dominate, Seal of Fire, Flowstone Crusher, Defiant Vanguard, Rathi Intimidator, and Treetop Bracers. After much debate, he settled on Seal of Fire. Flowstone Crusher might be a better red card, but his mana curve was so top heavy then the Seal seemed better for his deck. Tsukamoto gladly gobbled up Dominate with his second pick (after first picking a mere Oraxid).

Maki got exactly what he wanted out of pack #2: Blastoderm, but then things dried up in a hurry. His next few picks were Seal of Strength, Flowstone Wall, Flowstone Wall, and Laccolith Whelp. It's not that he made bad picks, there just wasn't anything better in his colors for him to take. This is where passing those early good green cards may have hurt him. Tsukamoto, meanwhile, added a lot of quality to his deck with Stronghold Zeppelin, Defender en-Vec, and some Rootwater Commandos.

Going into Prophecy Maki's deck didn't look very good. He had a couple fatties and a couple removal spells, but nothing else. Tsukamoto had a really solid blue/white deck with just one flaw: everything in his deck seemed to cost four mana.

Both players were happy with their Prophecy packs. Maki got a Scoria Cat while Tsukamoto drafted Troubled Healer. Tsukamoto followed up with Diving Griffin, which added both evasion and a three drop to his deck. After that Tsukamoto received a gift: third pick Alexi, Zephyr Mage. I would then have filled out the deck with Spiketail Hatchling instead of Alexi's Cloak and Coastal Hornclaw instead of Trenching Steed, but Tsukamoto should do just fine. His deck was completed with Withdraw came back to him with just 5 cards left in the pack.

Prophecy wasn't quite as good to Koichiro Maki, but he did get to fill out his mana curve with a couple Pygmy Razorbacks, a Veteran Brawlers, and a late Task mage Assembly. The Panic Attack that he picked up should be quite good in his deck too. All in all it was a quite interesting draft. Both players managed to situate themselves into colors such that they would not fight with each other over cards. Both players got reasonable decks, though I think Tsukamoto has the better deck, mostly because of the gifts he got passed late in Prophecy. 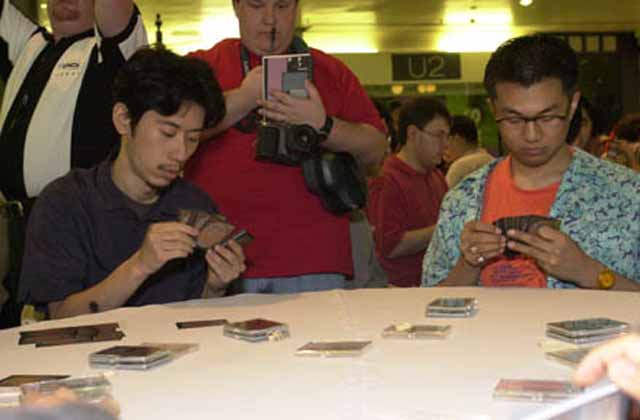 Interestingly, Maki and Tsukamoto got paired against each other in the first round. Click here to see what happened.