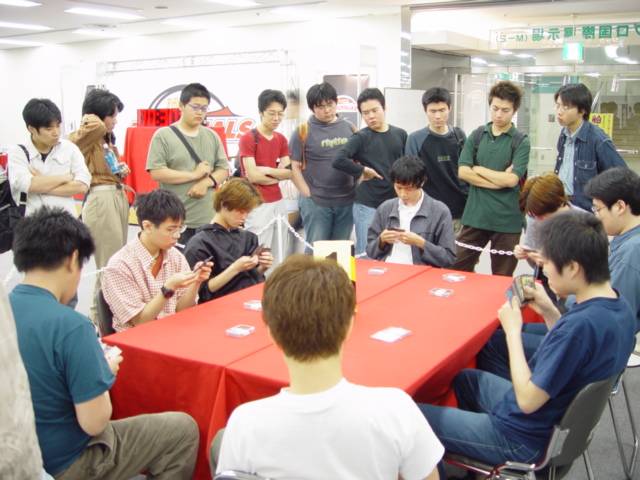 When asked about his picks, Morita was generally happy, although he did express regrets about taking Aven Archer over Embolden. He was especially happy to get a second Morbid Hunger. He also explained that he thought about going after blue in the first few packs, but quickly realized that it was being cut off and stuck with black.

Morita got lucky with Torment, dramatically increasing his deck's power with Shambling Swarm, and Cabal Torturer, a Limited power card. However, he's now drafting two of the same colors as Okamoto, which means they're going to end up fighting over Judgment.

Tempted to dip into blue when he opened the Scalpelexis, Morita decided to stick to two colors by taking the Shieldmage Advocate. However, after seeing what got passed to him, he said he probably should have taken the Scalpelexis. Given that his color requirements for white were loose, it would have been easy for him to add a third color, but he decided to play it safe and stuck with

for the rest of the draft.

According to Morita, his original plan was to draft green after committing to black, but was forced to use white as his support color when no good green came his way. When asked about the makeup of his deck, Morita admitted that he was worried about having too many sorceries and not enough support cards.

Morita's deck would soon be put to the test: His first opponent is Kei Ikeda, who ended up with all the blue, including 3 Skywing Avens and 3 Wormfang Drakes.