After crawling out of bed so early for this second day Noah Boeken and Ryan Fuller had a pleasant surprise awaiting them. They were sitting right next to each other on table one. They were so pleased with it they immediately started whispering between themselves. The understanding between the two friends was so perfect that there seemed to be only one person drafting for both decks. Noah got a brilliant G/W while Ryan went U/B.

Ryan's first pick was a no-brainer: Stalking Assassin, leaving a Probe. Boeken had a lot to choose from: Scorching Lava, Charging Troll, Stormscape Apprentice or Recoil. "Sensing" the Canadian's choice Noah settled on the Troll after some deliberation. The drafter feeding him, Tuduri, tried to go B/U/W so for the European Champion the first booster was full of goodies which included an tenth pick Explosive Growth! That signaled the small number of players dipping into green.

Noticeable cards after the first set of boosters:

The first booster of the second set gave Noah another tough choice: Fires of Yavimaya or Llanowar Knight? He took the Knight trying to stay true to his G/W first booster. Ryan got a nice Exotic Curse on his first booster. Fuller has a bit unhappy with his draft so far and he picker a Tribal Flames to splash red and maybe make up for the lack of removal he had after the first booster. It seems the players to the left of Fuller were also ignoring white: In his fourth pick Noah had a choice between Benalish Lancer, Glimmering Angel and Sunscape Apprentice! He took the Angel and kept getting good G/W picks while Ryan expanded his red splash and fought for U/B cards, which were under high demand.

Noticeable cards in the second set of boosters:

At the end of the second booster we had a nasty situation. People watching the draft had been mumbling about the "interaction" between Ryan and Noah since the start of the draft. The two players seemed to be standing too close to each other and their "casual" looks seemed to linger longer than you would expect on the other's hand. While the table judge had not taken action until this time, a passing Level 3 judge warned the two players about the situation asking them to separate their chairs further. Noah pointed out that they needed to get some round tables while Ryan tried to understand what they were being accused of.

At a point during the discussion Noah Boeken said: "My deck is already done". While that would seem true I think he really liked his first two picks in the third booster: Gerrard's Command and Fleetfoot Panther. He followed that with an Aurora Griffin and breezed through the rest of the pack pausing only to read a couple of Planeshift cards. Fuller on the other hand was still fighting a large chunk of the table for his colors. In the first booster he had a choice between Terminate and Nightscape Battlemage. He took the Battlemage. He got some extra creatures down the stretch: two Sea Snidds, a Hunting Drake, Nightscape Familiar and a Lava Zombie.

The other top player having a great draft was Olivier Ruel. Boeken and Ruel where the only two plays drafting green, and more importantly, they were the only two players NOT drafting black! To give you a better view of the trouble black players were in, here is the color breakdown of the table: 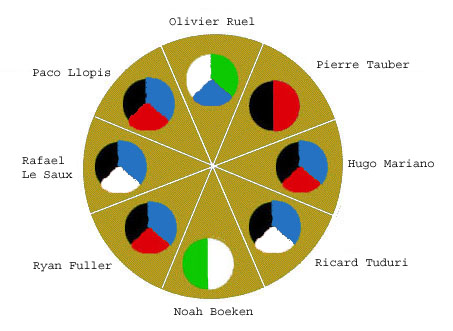 As you can see Ruel and Boeken had green's monopoly and Ruel's white had a good cushion on either side (two players on his left and one player on the right side). Blue and red were divided between four players. Paco Llopis opened a Treva in his first booster but he didn't want to settle on the colors so soon so he took a Annihilate instead to keep his options open. Ruel saw the dragon and he never looked back.

This table represents a regular sight in Invasion block drafts: players often fight too much for the more powerful colors (blue, red and black) ignoring the weaker (green and white). This leaves a lot of room for unconventional, or simply wiser, players to build a great deck. *******Monty, format these lists as you please*******