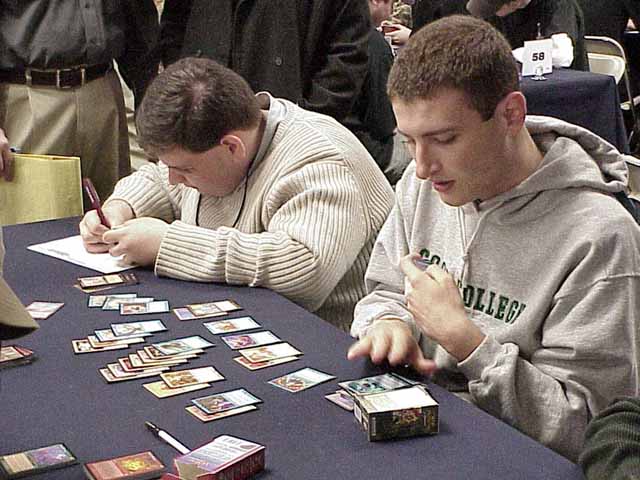 Team Antarctica needs no introduction, as it has the world's most famous Magic player: World Champion John Finkel. The other two members of the team, the brothers O'Mahoney-Schwartz (Dan and Steve), are no slouches themselves, as Steve won Pro Tour LA in 1999 and Dan has finished second at Grand Prix Copenhagen.

They cracked open the packs and quickly sorted the cards, cutting out immediately unplayable cards (i.e. Whipstiched Zombie) and sorting out the remaining playable cards by color and casting cost. They weren't particularly happy with their cards, as it seemed they got a lot of chaff and only a few great cards. Among the highlights of each color:

Black had some good removal, including a Seal of Doom, Sever Soul and two Steal Strengths. Unfortunately, the creatures weren't particularly good, as they included several three casting cost, double black mercenaries (Alley Grifters and Bog Smugglers). Rounding out the color was the great but expensive Plague Wind.

Blue had a few good creatures, including Extravagant Spirit, Spiketail Drake, Rashidan Airship and Ribbon Snake. It also had some good utility and removal, such as Dehydration, Rethink and Daze.

White was by far the best color, as it included a Lin Sivvi, Noble Purpose, Voice of Truth, a Glider, and the best common the in the block, Troubled Healer. It was clear that white would be the base of at least one solid deck.

Green had a lot of good fat, including Silverglade Elemental, Snorting Gar, Silt Crawler, and Giant Caterpillar. It also had good share of tricks, including Invigorate and Thrive.

Red also had some good creatures, including two Fault Riders and a Kris Mage. It was very light on removal, with only one Thunderclap.

The only good artifact was a Puffer Extract.

The team was not very happy with their cards. John suggested constructing a green/red deck, and splitting the blue between black and white, as blue was probably the only color strong enough to be split up (white was also strong, but the cards seemed to go well together). For a minute, the team was worried that there wasn't even enough cards to make 3 decks with 23 playable cards each, but by redefining what they meant by "playable," (adding Trickster Mage, for example) they were able to get enough cards.

John then suggested cutting both the blue/white deck and the blue/black deck down to 22 spells (and 18 land) because neither is fast and they are being forced to play some marginal cards. A Bog Smugglers was then cut from the blue/black deck.

The team was fairly pleased with the red/green deck, as it had a lot of green fat to smash through the opposition with. The biggest problem was that it had very little removal (only one Thunderclap), although it did have some good combat tricks (Seal of Strength, Invigorate). Because a lot of green had double green casting costs, they cut a few marginal red cards that had double red casting cards (for example, Lithophage)

Overall, the team thought that their decks are fairly poor, although they hoped to finish with at least one win. With the playing skills of these team members, including the best player in the world, even a relatively weak selection of cards may not be enough to stop them.