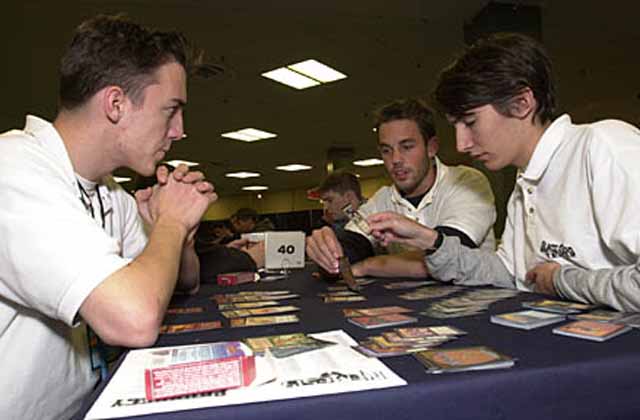 Team Black Ops, consisting of Antoine Ruel, Olivier Ruel and Florent Jeudon, are very experienced when it comes to limited Team Events. They have won the Team Challenge, won this year's Team Grand Prix in Cannes and are current French National Team Champions. In addition to this, the Ruel brothers are on a recent high from last weeks Grand Prix in Porto where Antoine and Olivier faced off against each other in the championship match to decide the winner of the tournament.

Team Black Ops was in a jovial mood as they opened their first set of sealed decks. Their moods only improved as they looked at the cards they had been given. They immediately started sorting cards by color, with members of the team announcing any outstanding cards. Power Matrix, Cateran Overlord and Kyren Negotiations were the highlights in Masques. They'd also opened some very solid Rebels although had only a Commander to search. The searchers improved significantly with Nemesis as Olivier pulled a Defiant Falcon and the ultimate Rebel searcher Lin Sivvi. Prophecy's highlight was Jolrael, Empress of Beasts which was added to an already solid Green selection. Black Ops were extremely happy with their selection and didn't try to contain their excitement.

They did a quick overview of the colors. White looked outstanding with excellent Rebles including both Nightwind and Thermal Glider, Lin Sivvi and Shield Dancer. In addition to this, they had Trap Runner, Troubled Healer and other great cards. Black was also great with a Mercenary engine, and three solid removal. Green looked fine with a lot of superb creatures including Jolrael, Snorting Gahr, Silverglade Elemental, Living Terrain and Silt Crawler.

They start off by building a White/Red Rebel deck splashing the red for Kyren Negotitions and a couple of Red removal spells. After a bit of discussion they note that the deck has a number of one toughness creatures and so include Blaster Mage as an answer to Stinging Barrier and Flowstone Strike to deal with any opposing Kris Mages and Plague Witches.

The Black/Green deck comes next and this proves the toughest to construct. Despite cutting out a number of solid cards they still find themselves with 26 candidates for the deck. After much discussion a Cateran Persuader gets cut from the Mercenary chain, Stampede Driver gets cut in favor of Deepwood Drummer and finally a Treetop bracers is the last card to leave the deck bring it to 23 cards.

The final deck they construct is Blue/Red. This deck is very solid but is initially lacking any of the bombs that made it into the other two decks. The Power Matrix had been placed in the Green/Black deck but the Team decided to move this to the Blue/Red deck which freed up a slot in the Black/Green whilst also giving the Blue/Red a geat game winning card. They narrowed this deck down to 21 cards, and had a choice of Panic Attack, Flowstone Strike and Seal of Removal as the final two cards. Florent noted the deck had a number of one toughness flliers and, as they did with the White deck, Flowstone Strike was added to deal with Plague Witch and Kris Mage. Seal of Removal was the last card as the Team seemed to feel that the deck had enough evasion to negate the need for a Panic Attack finisher.

At this point Olivier commented "This morning a friend asked me what I wanted from my sealed decks. I told him that I wanted a good Blue/Red deck, a Black/Green deck with a lot of removal and fat creatures, and a White Deck with lots of Rebels and Lin Sivvi. I couldn't have wished for anything better than this!"

With the decks built the team take a few minutes to look through the remaining cards for sideboarding options. With so many good cards not even making it into the decks they have a lot of possibilities.

I asked Black Ops what they expected from their decks, and the answer was fairly obvious. Olivier said "2-0 would be a decent result" whilst Antoine commented "Yeah we should go 2-0, anything else would be terrible". Olivier summed up their feelings by saying "I don't think the other sealed decks will be anywhere near as good as these, so we should make the most of them. We definitely should go 2-0".