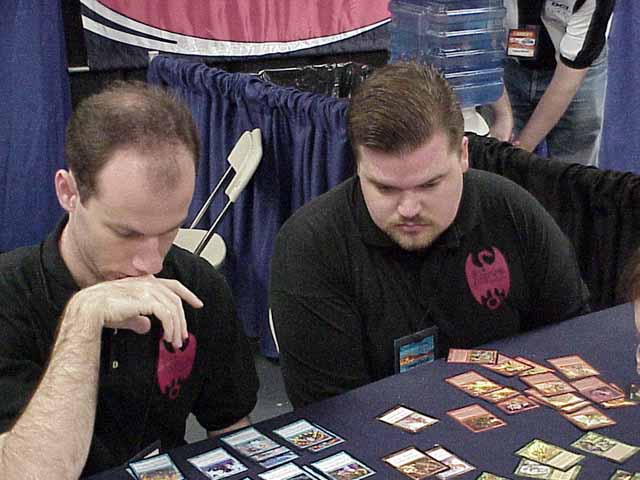 Team Your Move Games is comprised of Darwin Kastle, Dave Humpherys, and Rob Dougherty. They are the defending Team PT champions, from Washington DC last year. They have also placed third in GP St. Louis and GP Pittsburgh. They are old friends, and have been playing together for years.

A heavy amount of Black removal and a complete lack of Red removal marked the initial Sealed packs opened by Team Your Move Games. The creature base in Green was solid, relying on the heavier casting-cost creatures, and White and Blue also had a solid amount of creatures.

Once the cards were separated out, the three men slipped into decks that each of them had played before. Rob Dougherty took the Green creature base and matched it with what few playable Red cards they had, including two Battle Ramparts, and used the only playable Red removal card in the pack: Flowstone Strike. The Green creature base started with Vintara Snapper and ended with two Silverglade Elementals and a Saproling Burst. He also had a few tricks in the deck, including Lure, Spidersilk Armor, and Natural Affinity. Dave Humpheries settled into the White and Blue, with a playable Rebel chain and Troubled Healer, and expected to use Jolting Merfolk and Ensnare to get his creatures through. Darwin Kastle took the Black removal, which included two Snuff Out, Vendetta, Seal of Doom, and topped out at Forced March. He used some of the Mercenaries to start his creature base, and included Cateran Summons to be able to search out the top-end of his chain: Notorious Assassin and Cateran Kidnappers. Darwin supplemented his light number of Black creatures with a few beefier Blue creatures, including Coastal Hornclaw and Sapprazan Breaker. He was sideboarding a Distorting Lens in case he came up against another primarily-Black deck.

Darwin was satisfied with the decks, although he did mention that he was happy that they only had to play two rounds with the decks. He felt that his own deck was the strongest among the three, while his two teammates felt that the R/G deck would be the one to beat.