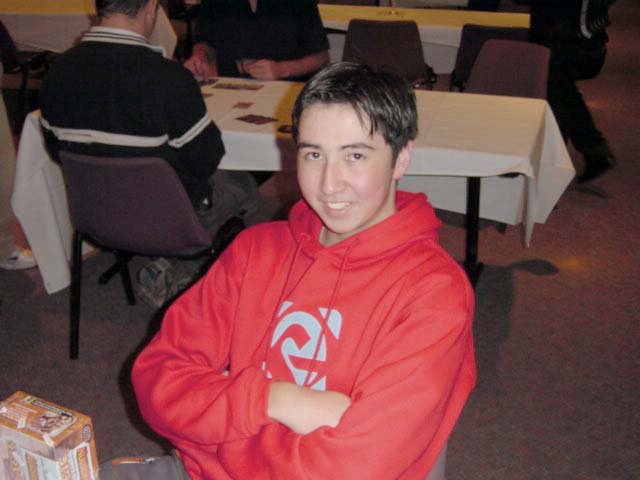 Joe begins the interview by admitting that he hasn't done much testing for Nationals this year because he's been occupied with other activities such as playing Counter Strike online. An 18 year old student from Melbourne, Joe began playing back when Visions was first released and has been playing competitively ever since. His finest hour was when he piloted a copy of the Turbo-Obliterate deck to the top 4 of GP Sydney 2000, which showed everyone that he was an up and coming force to look out for.

Who do you think will do well in each format?

Dane Coltman. If I had to pick someone to do well in the draft it would be him, his form over the last few nationals tournaments speaks for itself. I'm not too confident in picking anyone for the Type 2 section though, from the little I've seen of the format it seems like there is no dominate deck and play skill may not factor in to some of the matches.

How do you expect to do in each of the formats?

Well as I said at the start I haven't really done a lot of testing so I think I'm not going to do very well. For draft I'll just rely on the knowledge that Andrew has given me about the format and for Type 2 I'm going to play the deck that I'll do well with regardless of how it tests vs the other decks in the format, it'll be safer to go with what I know.

Void, I guess a lot of people would love to see that card staring at them when they open their first booster pack.

What decks do you expect to see day 2?

Just like everyone else I think that there will be a lot of Fires decks , and to counter this I think there will also be a lot of Nether-Go decks. US Regionals didn't really help the situation out much as there was no real dominant deck, it just shows how much of a crapshoot the format is.

Well like I said before I haven't really been playing Magic much lately, I've been playing Counter Strike on the computer, if that counts for anything. I have done a few drafts online with AndrewPL, one of my friends off IRC from New Zealand. He seems to know what he's talking about so I trust his opinions on cards and colour combinations and all those issues.

Who would be in your ultimate playtest team for worlds?

Most of the guys I talk to on IRC about magic play quite a lot and they are getting really, really good, so if I had to pick someone to team with I think it would be Peter Szigeti whos been doing well at a lot of the GP's and Jay Elarar who had an amazing finish in Chicago last year with Skies.