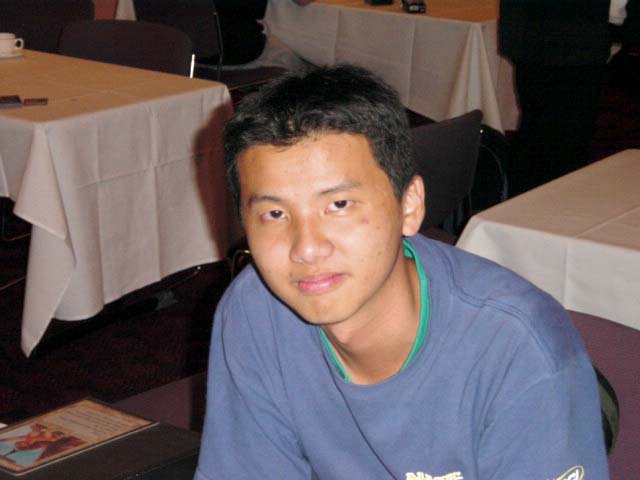 Pang Ming is a 20 year old Malaysian student who is in Australia doing a years study at the University of Queensland located in Brisbane, which will be the host city of a Grand Prix later in 2001. Pang Mee came to Australia and quickly had himself entered into the Australian rankings database to ensure his eligibility for nationals. Much to the surprise of many of the Australian players, he became the highest composite ranked player in the country.

Pang Mee managed to get a high constructed ranking by placing 10th at the recent Grand Prix-Singapore, which he notes as his best accomplishment. His limited ranking was boosted thanks to a string of 3 wins in high profile limited events. He also has a top 8 finish at the Hong Kong open on his resume. Although Pang Mee started playing Magic at the time around Revised was available, he became devoted to tournament play about the time of Exodus.

How do you expect to do in each of the formats?

I am aiming to go 4-2 in the draft. I know it's not a very high goal, but I expect the competition to be tough. If I do any worse however I will be disappointed. I am lot more confident for the constructed portion of the tournament. I am playing a simple control deck that I have been tuning for the last 2 months. Since I decided my deck early on I have had plenty of time to become comfortable with it.

Pyre Zombie. I like to draft Red/Black or White/Blue. I like the targeted removal of the Red/Black combination and the flyers and bounce of the White/Blue. Generally I don't force colors in draft, I just go with the flow.

What decks do you expect day 2?

Fires of course. But I've seen a lot of Nether-Haups around and it's definitely going to do well. I'd also consider maybe Blue Skies as the underrated deck. I think Fires will be the deck to go 6-0 though.

I've been drafting for the last two weeks, 4 drafts a week with the rest of the Queensland players. I am fairly confident in my limited skills so I think I have done enough preparation, even if I am only aiming for a 4-2 finish. I've done 2 months preparation with the same deck for constructed day, which I think is enough. I don't actually have an official team, just a bunch of guys I playtest with and get decks from back in Malaysia, though 2 of them are here with me studying in Australia.

Who would be in your ultimate playtest team for Worlds (any player, not just Australians)?

Jon Finkel - He's the best.
Tsuyoshi Fujita - My favorite Asian Player.
Gary Wise - He's just a fun player. I drafted with him in Malaysia when he was there for the Invitational and had a great time.