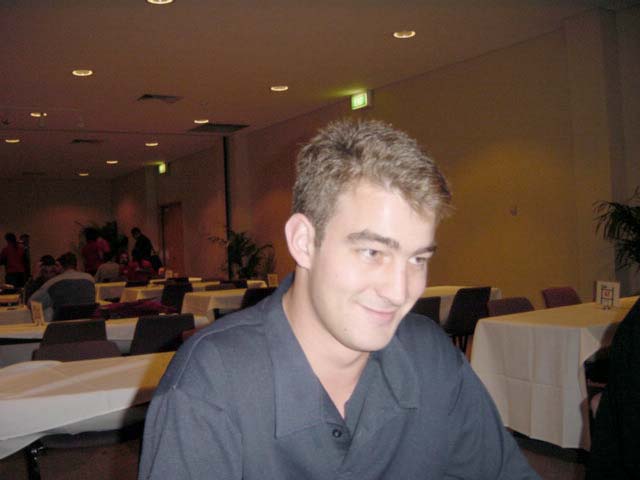 Flying in from Perth on Monday to go clubbing and play test with Dane Coltman, Sam Ward could be the most prepared player for this years Nationals. At the age of 24 Sam is a student, who began playing Magic 6 years ago in 95. His best finish was top 4 at APAC which qualified him for worlds, however shortly before his flight he was very ill and the flight made it worse, marring what could have been one of Australia's best ever finishes at the event.

Who do you expect to do well in each format?

For the draft portion of the tournament, I think that Dane Coltman is an easy choice. He does a lot of testing online, drafting several times a day. For the Type 2 I think that Milan Franger will have the best record as he's been refining his deck for ages and rarely makes a mistake when playing it.

Whats your ultimate 1st pick in the draft?

Ghitu Fire. Just cause it's so splashable and it doesn't really force you into any set color pattern early. Plus its obviously one of the best spells in the format on its own.

What decks do you expect to day 2?

I think that the format is going to stay true to form, with strong showings of the Fires, Nether-Go, Turbo-Haups and the Nether-Go decks. Fires should be the most played deck, but you will find large numbers of all of these decks in the field.

I've been testing Type 2 both online and in real life with Milan Franger for the past 6 weeks or so, and Dane Coltman for the past 2 weeks, which I believe has given us a sound understanding of the format and the in's and out's of each match up. On the draft side I've mostly been doing that online but I do the occasional draft at Empire Cards in Perth so I can see the pictures on the cards.

What would be your ultimate playtest team for worlds?

Ben Ronaldson, Jon Finkel and Kai Budde for obvious reasons. They're all really great guys plus they have an intimate understanding of the game, you can't really go wrong with that combination.