By Greg Collins and Hanno Terbuyken

The rain in Spain falls mainly on the plains....and mountains, swamps, forests, and islands, apparently. 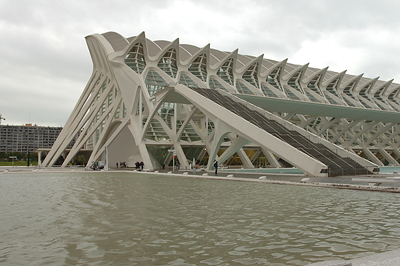 The exterior flooding happened at the intersection of the walkways by the main entrance, eventually flowing into the hall (photo taken Friday morning).The first day of Pro Tour-Valencia was cancelled as torrential rains had drummed on the roofs and windows of the city all night, seeping into the Ciutat De Les Arts Y Les Ciencies and causing the immense but shallow ornamental reflecting pools outside to overflow. Wizards of the Coast made the decision to cancel Friday's activities at 3 a.m. after water flooded significant portions of the hall, leaving standing water as deep as 6-8 inches in some locations. The combination of the mud and water on the marble floor made for treacherous footing, almost like a sheet of ice.

After a clear day Wednesday, rain started falling mid-afternoon Thursday and intensified as the day went on. As of 11 p.m. there was standing water outside the Ciutat De Les Arts Y Les Ciencies, and by 1 a.m. water was seeping into the venue from multiple entrances and the building was evacuated.

The tournament staff met until 3:30 a.m. developing contingencies, but ultimately had to wait until Friday mid-morning to meet with staff from the CAC to determine the state of the hall.

Hastily printed announcements adorned the hotel notice boards and the walls of the elevators, detailing in English and Spanish that Day One was cancelled and further information would follow. Members of the event staff were positioned at the site to tell players the news and provide expected times to check back for updates.

"I talked to the players for about an hour. Nobody was really angry," commented Chris Galvin, Vice President of Organized Play at Wizards. "You could see into the museum and see what kind of mess the room was in." 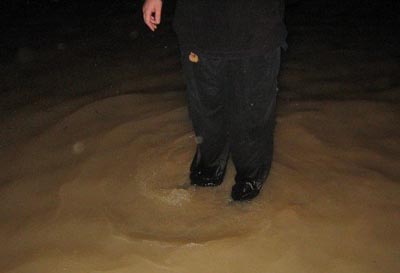 A scene from the event site late Thursday night.After meeting with building engineers Friday morning, the all-clear was given to re-enter the hall that afternoon. The Ciutat De Les Arts Y Les Ciencies re-opened to the Magic-playing public at 6 p.m. for late registration, pick-up drafts and a special Friday Night Magic thanks to yeoman's work by the cleaning crew and the event staff.

"This is the first Pro Tour in history to suffer a rain delay," said Kelly Digges, Magicthegathering.com's editor on site in Valencia. He had the chance to see the indoor lake first-hand Friday morning. "I saw the sign on my way down in the elevator. As soon as I heard that Day One was cancelled, I knew it was flooded. When I left the site last night, rain was already coming through the roof and the door. The IMAX cinema under the venue is probably 10 feet under water," he said.

Pro Tour manager Scott Larabee and head judge Jaap Brouwer put together a modified two-day schedule that cut the tournament from 16 to 13 rounds and preserved the Top 8 as best-of-five matches. The tournament will have 10 rounds on Saturday, with the cut made at 21 points. Those players will return for three Swiss rounds Sunday leading up to the Top 8 cut. The only other schedule change was cutting the round time from 60 to 55 minutes for the Swiss rounds.

The rising waters forced the evacuation of the hall at approximately 1 a.m. Friday, sending the remaining players of the Last Chance Qualifier out into the rain. The LCQ was approximately 20 minutes into its eighth round when it was stopped. The nineteen players with 16 or more points after seven rounds were awarded slots in the main event. As the players filed out, the event staff worked frantically to get everything on dry land. When they were shin-deep in the muddy flood, they had secured everything but themselves—including a backroom full of Magic product and the dealer's inventories.

This is the first time any significant portion of a Pro Tour event has been cancelled. The first Pro Tour in New York was delayed four hours due to a snowstorm. The London subway bombings of July 7, 2005 occurred one day before Pro Tour-London, but that did not affect the start of the event. 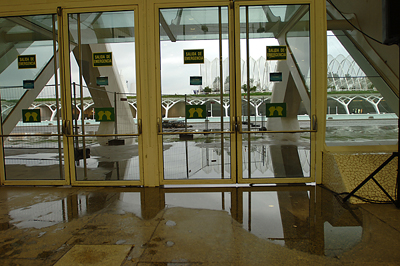 Friday morning revealed leftover water that had seeped under multiple entrances.While Wizards staff members were sorting out the damage and revising schedules, a ballroom was opened up at the staff hotel one block away from the event site for players to bide their time until the hall re-opened. Sealed decks of Lorwyn were provided for anyone who wanted to play with the new set on its release weekend.

Players had a mixed reaction when learning that Day One had washed out.

"I was upset like everyone, but not negatively," said Tiago Chan, Level 6 pro from Portugal. "I'm sure everything is being done to solve the problem."

On the other hand, the Norwegian contingent was upset at how quickly the venue succumbed to the weather. "If I wasn't fairly calm as a person, right now I would be outraged," said Oyvind Anderson, creator of Panda Connection and a noted Norwegian deck builder. "It's ludicrous that a site can't stand a night of rain."

His anger was shared by his friend and teammate Christian Flaaten. "It's a holiday, too, so you can't go shopping, and the weather is bad, so sightseeing is out of the question, too."

"I certainly wasn't expecting this. I was hoping that they'd just cancelled, gave everyone three Pro Points and split the [prize] money evenly."

But Magic players are a resilient bunch, and the scene of multiple players testing their Extended decks and playing with the new set at the staff hotel showed their confidence that the show would go on.