Tour-Atlanta is a Team Limited Pro Tour, you all know that by now. While Day Two of the event is Team Rochester -- a format that has been called the most skill-testing in all of Magic -- Day One is Team Sealed.

Over the course of Friday's six rounds of Swiss competition, players received three Sealed Decks: two starter decks of Champions of Kamigawa and four Betrayers of Kamigawa booster packs, refreshing them with new card pools them every two rounds; this helps to ensure that teams with really good card pools don't have too much of an unfair advantage -- and that teams with terrible ones aren't saddled with them overlong. The story of Day One is the story of the two words comprising the format's name: "team" and "sealed" (deck, that is). 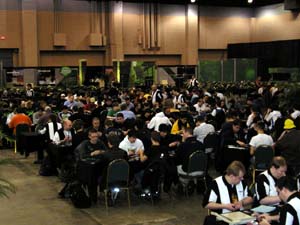 Day One opened to 119 teams ready to open Sealed Decks.

The "team" in Team Limited brings players like Chris out of semi-retirement to sling cardboard with their friends. Guys like Atlanta's local hero Sol Malka, former U.S. Nationals finalist John Hunka, and reclusive poker superstar Dave Williams are all in attendance at this Pro Tour-Atlanta, striving for Magic glory while being bolstered by the camaraderie of their friends and teammates in a way that doesn't exist at individual events. Bob Maher, reigning Magic Invitational Champion, said that although he attends fewer events than he did when racking up premiere-event wins, he will never be totally out of top-level Magic. For Bob, Team Limited is a perfect opportunity to hang out with friends that he would not otherwise see while simultaneously competing against some of the best minds of today's game.

The other aspect of Team Sealed is of course the Sealed Deck portion. While most players seem to love the increased social element of Team Limited, the fact that they are playing sealed deck is much more controversial.

Pat Sullivan of TOGIT team GWalls Soaking Wet was not pleased at all with his team's 0-2 start in Sealed Deck.

"Why would I like Sealed Deck?" Sullivan asked. "If this tournament were eleven rounds of Rochester Draft, we would embarrass all but half a dozen teams in this room! Instead, it's like Wizards drafts for them."

While GWalls Soaking Wet did a ton of draft practice, they didn't approach Day One with as much enthusiasm. Sullivan's teammate Adam Horvath commented that they had done some Sealed Deck, but maybe not enough. "How much can you do?"

Jeroen Remie and Von Dutch had more luck with their Sealed Decks, starting off 4-0. According to Remie, the Dutch team ran some Sealed Deck practice but usually built their decks the same way: a red-black deck, a blue-white deck, and either a green-black or green-red deck. As they went the same direction with each practice card pool, the defending Team Limited superstars decided to concentrate on their Day Two draft skills.

"Most pros have very little experience with Sealed Deck because it isn't played [often] on the Pro Tour. Because of that, you will find a lot of PTQ players who have better Sealed Deck skills than pros, while the better players struggle."

That said, Eric Taylor, the "Dad" (un-Dad?) in He's Not Our Dad, observes that Sealed Deck is gaining respect as a serious format.

"Some players are masters of Sealed Deck," said the former Grand Prix Milwaukee Champion. "Most pros have very little experience with Sealed Deck because it isn't played [often] on the Pro Tour. Because of that, you will find a lot of PTQ players who have better Sealed Deck skills than pros, while the better players struggle."

Though most of the top level pros do not like playing Sealed Deck (which they consider a lower skill format than draft) on the Pro Tour, the game's best minds still apply their considerable Magic theory to getting the most out of the decks WotC "drafts for them."

According to former U.S. National Champion Eugene Harvey, Team Sealed Deck teaches players particular skills. Overall, the power level of Sealed decks is greater than draft decks. Teams can build their decks for maximum power, synergy, and consistency because they have large card pools that are not disrupted by the opponents' picks. In building these Sealed Decks, a big part of a team's success comes from correctly splitting colors. Though a deck like mono-black can be attractive both in terms of card power and raw removal count, Harvey cautions against not splitting and diversifying your black.

"Playing mono-black enhances your strengths and your weaknesses," he cautions. "Say you play against another black deck… All of a sudden you are stuck Befouling their land. With a black-white deck, you may end up with a less powerful deck, but you will also have more options."

Many players, not surprisingly the ones with some of the better records, had nicer things to say about Sealed Deck. Mike Clair and his team Paul Jordan LOL were the beneficiaries of a strong day in this format.

"Sealed Deck doesn't reward the best pros or the ones with the most experience," said Clair. "However it can really help a players with less experience but lots of potential. The success of a young team like :B at the Grand Prix level shows how this format can reward that potential." Another example of a player with unrealized potential, Mike himself is playing in his first Pro Tour

Paul Jordan LOL separates their Sealed Decks via color preferences by player. Steve Sadin, for example, usually gets blue-red, and if they don't have sufficient red cards, blue-white. The team consensus is that blue-white is the best color combination in the format.

"Think of a card you want that costs three mana. Blue-white has got it: Bushido, removal, Kabuto Moth… even 3/3 creatures like in green," Sadin said.

For the last Sealed Deck of the day, namesake Paul Jordan's blue-white monster had Tallowisp, two Indomitable Wills, and a Kokusho the Evening Star. After building their decks at 4-0, Paul Jordan LOL took down arguably the best team in the tournament -- Von Dutch -- at the undefeated table before falling to Portuguese team Boat in Round 6.

Once you separate out cards to build decks, there is the added question of which deck goes in which seat. There are several different schools of thought on this issue, such as giving decks to the players most comfortable with them, all the way to trying to break the metagame by setting up favorable matchups.

"When we played with Gary Wise," said Bob Maher after a Round 2 loss he credited to bad matchups, "we tried to figure out which decks should go in which seats based on what we thought our opponents were going to play in Rochester Draft."

Bob, with a tiny black-blue deck, was mauled by Bram Snepvangers' blue-red burn deck, but thought that he would have won if he had played teammate Dave Williams's green-red fatties. 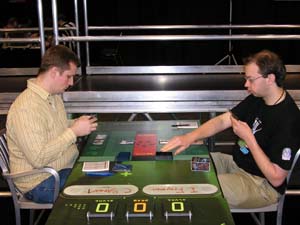 Bob Maher, left, returned to the Pro Tour for the camaraderie of Team play.

"The amount of advantage you can generate by trying to set up good matchups is small, and is generally outweighed by the variance," continued Maher. "Though we won a lot in Boston, if we had played the team to our right or left, we might have had bad matchups. This strategy only works if you are playing against teams who have practiced, who know which decks they are playing in which seats during the Rochester Draft, and only if you have practiced, so you know that information."

The always vocal Osyp Lebedowicz and his team NFC escaped the Sealed Deck portion and are ready to represent the TOGIT camp in Saturday's Team Rochester event. Though fighting alongside one of the most-well prepared cadres in the tournament, Lebedowicz cautioned that Day Two's tournament will not be like Team Rochester Pro Tours of the past.

"This is without a doubt the hardest Team Rochester format of all time," claimed the Pro Tour-Venice champion. "The difference is that there are only two sets."

In the past (for example, in an Invasion-Planeshift-Apocalypse draft), the three sets of the Invasion Block dictated one of two primary strategies. The strength of black and red in Planeshift, for instance, put most teams' A players in black-red because the Invasion pack went left, the Planeshift pack went right, and the Apocalypse pack went left again. This strategy allowed players to protect the most black and red picks possible; for example, if player B opened Flametongue Kavu or Terminate, he could pass it to his teammate in seat A consistently. This protection strategy, dictated by choosing colors based on packs and pass direction, allowed Aaron Forsythe, playing in his last Pro Tour before graduating to Wizards of the Coast, to thunder into the Top 4 of Pro Tour-New York 2001 with three consecutive Magma Bursts.

The "anti-" strategy gives up the natural strength of "black-red in A" in order to put a white deck in that seat. Working under the assumption that a competent opposing team will go black-red, the opposing team goes for Protection from Black, Protection from Red, and damage prevention effects to fight the expected matchup.

With only two sets rather than three, these kinds of models go out the window. The reason is that the first Champions of Kamigawa pack goes left… but the second Champions of Kamigawa pack goes right. This combination of opposites and sameness makes predicting which colors go in which seats difficult because the same incentives are tugging in both directions for the first two packs.

"The most important task in this format is figuring out where the opponents will put which colors, especially their green deck," said Osyp. "Because they don't usually take green card in the first two picks, figuring this out if the opponents kick is hard… You'll see tomorrow."