The Flores File: "The Dust Clears" 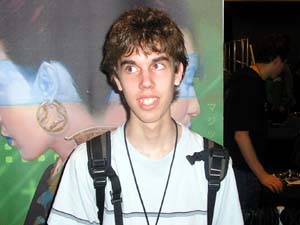 At the end of the last episode of the Flores File, Kai Budde -- Legendary standout in a room and constructed block full of Legends -- towered at the top of the standings, a perfect 6-0 with his rogue Black-White Control deck. Kai was poised to recapture that fire of old, ready to close the gap with Jon Finkel's 11 Pro Tour Top 8s to one narrow event.

Alongside the most decorated player in the history of the game were four other perfect records: Andre Mueller (also of Germany), Japan's Ichiro Shimura, Swede Simon Carlsson, and American rookie Ryan Cimera. Though Friday, we focused most of our examinations to the various green decks, close inspection of Day One's Top Five shows nothing but Plains.

After Kai's Black-White deck, the rest of Day One's top players reveal a tangle of Tallowisps. Of the remaining undefeated decks, only Andre Mueller's lays Forests; each of Ichirou Shimura, Ryan Cimera, and Simon Carlsson commands a different look at White Weenie.

This proliferation of aggressive white at the top tables spelled doom for Kai. As good as his deck was against the ponderous shuffling of Tribe Elders and Divining Tops, that's how vulnerable the German Juggernaut was against White Weenie. Though he beat the archetype in his lone challenge on Day One, Kai was dealt swift losses in rounds seven and eight at the hands of Carlsson and Cimera. Going into the ninth round, Kai had his back against the wall, a sharp contrast to his position just two hours earlier.

Ryan Cimera's deck runs a full Tallowisp engine. Via his Arcane cards such as Blessed Breath and his numerous Spirits, Ryan can dig through his library for Indomitable Will and Cage of Hands. Indomitable Will is an important tool for surviving Hideous Laughter or winning fights, and Cage of Hands gives the White Weenie deck an opportunity to crash past the opponent's Tide Stars, Rising Stars, and Bandit Warlords. Cimera ran through the first nine rounds of the tournament as the sole undefeated player before losing to Olivier Ruel.

Of all the White Weenie decks in the room, my favorite was Ichiro Shimura's. His unique feature was Waxmane Baku. Along with Tallowisp, Shimura's Bakus gave him a spiritcraft engine without peer. The Baku, overlooked by the rest of the field, allowed Ichiro to race the opponent's giants or just tap down their Orochi Sustainers and Daughters of Seshiro. Holy Rishadan Port!

"Attacking for two is really important for this deck," commented Shimura. "Waxmane Baku helps you win the Jitte war in the mirror, but sometimes you just have to tap their Sakura-Tribe Elder to get Isamaru through."

After a great opening with an innovative build, Shimura was finally eliminated from Top 8 contention in Round 11 by countryman Shuhei Nakamura.

After his disappointing losses to White Weenie decks, Kai completed a three-round skid in a hard-fought loss to Mark Herberholz. The win over Budde was the first of four consecutive Feature Matches at the front table for the Michigan college student. Herberholz's Gifts Ungiven deck took down first Budde, then the best deckbuilder in the world, Tsuyoshi Fujita, then posted a breathtaking comeback against Jim "Rotting Giant" Roy's Rootrunner recursion monstrosity, before finally hitting the breaks against Olivier Ruel's Sway the Stars all the way in Round 12. Luckily, Mark had already locked up a Top 8 spot. 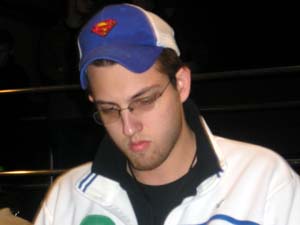 The skill of the Gifts Ungiven players is one of the most compelling elements of this Pro Tour, in my opinion. Watching players like Herberholz think past big names like Budde or Fujita with slight variances in a deck build is a showcase of ability far beyond the ken of the average Magic player. The baseline strategies are easy. Gadiel Szleifer can play a Gifts Ungiven for Hana Kami, Stir the Grave, Soulless Revival, and Ethereal Haze to paralyze his opponent's offense. Which two cards do you give him?

More than setting up recursive locks, Gifts Ungiven gives players the tools they need to bust out of difficult situations. In one tragic match, Grand Prix-Boston finalist Lucas Glavin had Pro Tour-Columbus champion Pierre Canali low on life … but was down a game and facing Myojin of the Cleansing Fire. Lucas piggybacked Pierre's Heartbeat of Spring to find Sickening Shoal, Nezumi Shortfang, Stir the Grave, and Kokusho the Evening Star. Lucas's worst-case scenario was the ability to eliminate the nominally indestructible Legendary Spirit with his Betrayers of Kamigawa rare. This match ended in a draw; Lucas believed that a draw would give him the Top 32 he needed for an invitation to Pro Tour-London. Instead, due to poor breakers, he finished 34th and neither Lucas nor Pierre was able to advance.

Saturday's early rounds saw other players disappointed, too. Half the players who showed up at 4-2 got up for a 9 a.m. match with nothing to do come 10.

For the rest of the competitors, the next five rounds were furious nail-biters. The last hope for Tsuyoshi Fujita's Dragon Paddle deck, Shuhei Nakamura won his 11th-hour (and 11th-round) match against Ichiro Shimura that most players would have given up on eight turns before its eventual conclusion. At the highest levels of the game, players desperately block incoming attackers and burn their own men with their vital Glacial Rays in order to avoid Umezawa's Jitte combat damage. After a desperate string of turns that turned into an eventual win, Shuhei's eight-round undefeated run to join Columbus Top 8 classmates Gadiel Szleifer and Olivier Ruel ended at the hands of the red-hot Kenji Tsumura.

For his part, Kenji played with no margin for error the entire day. Philadelphia is Kenji's second Sunday appearance in a row; besides being personally undefeated on Day Two of Pro Tour-Atlanta, Tsumura distinguished himself with a repeat perfect day to make Top 8 here.

The Philadelphia Top 8 is a showcase of both experienced talent and brand new faces. Steve Wolfman had to win a PTQ to get here, but hopes to follow up and improve upon his team 2020 Sunday performance from Boston a few years back with his Blue-green-white mid-range control deck. Like Wolfman, Andre Mueller is one of the control decks with just enough creatures to play Umezawa's Jitte. He complicates matters with Cranial Extraction and gives White Weenie a wink with Kitsune Blademaster(!). 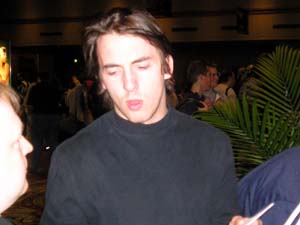 Olivier Ruel made his second Top 8 this season.

Olivier Ruel's Sway the Stars deck adds a very "Upheaval, Psychatog" to the typical green mana acceleration of the block. Szleifer and Herberholz, young Americans with one previous Top 8 apiece, look to set up recursion with Gifts Ungiven and Hana Kami; they are joined by Tsumura running a similar strategy, but with the added flavor of Itaru Ishida's two favorite Myojins. The rookies of the bunch, Cimera and Jeff Novekoff, are the most aggressive, with half the Jittes and all the beatdown creatures in the Top 8 found in their two decks.

Umezawa's Jitte was the most-feared card coming into Pro Tour-Philadelphia, but the Top 8 was defined by 28 Sakura-Tribe Elders and 28 Kodama's Reaches. Jitte is clearly good, but didn't ruin the tournament, as was feared. Osyp Lebedowicz said that it actually helped to ground the format and help define what players should prepare for. Don't look for this card being banned any time soon.

Personally, I can't wait for the Top 8. Join me and Randy Buehler on Sunday at 10:45 a.m. for the quarterfinals. As a special treat, we have Mowshowitz vs. Fujita and Maher vs. Davis running during the breaks. Zvi's Tokyo finals saw the first Japanese player to make a Top 8, and Maher vs. Davis is literally the greatest match in the history of Top 8 commentary. I'm sure you'll enjoy both our coverage and these classic matches.