The Flores File: "Except for All the Shuffling"

Here at Pro Tour-Philadelphia 2005, we are seeing aggressive Rat decks cripple their opponents with discard as they crash into the Red Zone and White Weenie, one of the most touted - and highly expected - archetypes, waving its Umezawa's Jittes in menacing numbers. Rumor has it that the current best player in the world is summoning Ninjas this weekend, sneaky devils who palm extra cards off the top or bounce hefty Legends back to their owner's hands.

But saunter over to the Feature Match area and you will see more than half the spots on those four tables, round after round, dominated by what seems to be the same deck, table after table … the thing is, the players on those tables aren't necessarily playing the same decks at all. 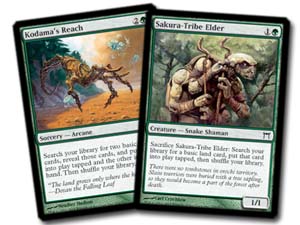 It's easy to make that mistake. Many players, from the Dutch-TOGIT List, to France's young standouts, to many of the disparate, desperately talented, Japanese, are running all the same cards. The decks in question are all base-green, drawing on that color for its staple mana accelerators Sakura-Tribe Elder and Kodama's Reach. They universally pack the same threats, Legendary lineups with Meloku the Clouded Mirror and Kodama of the North Tree at the vanguard.

Despite their superficial similarities and many cards in common, the multicolor green decks of Philadelphia are comprised of a rich tapestry spanning three or four of the five colors in Magic. They focus on library manipulation and mana acceleration in ways so starkly different that, by comparison, the Madness and Threshold cousins of Odyssey seem identical.

For Green players, the limiting factors of this format come in two flavors: how well a deck holds up against aggression (typified by White Weenie), and the nature of the new Legend Rule. Different mages handle White Weenie with techniques, ranging from splashing White for Final Judgment, to overloading their small front lines with Glacial Ray splices, to siding in the deceptively frustrating Empty-Shrine Kannushi as a blocker an unstoppable compliment to Umezawa's Jitte.

The goal of the new Legend Rule is to prevent situations like Billy Jensen's loss to Osyp Lebedowicz in Venice a few years ago. With Legendary creatures now playing 187 against one another (rather than being stranded in hand), the ability to force through the powerhouse threats made available by all that green mana becomes a major concern.

Because of its resilience to removal and ability to bust through 1/1 chump blockers, Kodama of the North Tree is among the most popular choices in Philly, while Meloku the Clouded Mirror needs no introduction. Quite capable of taking names in wider formats like Extended, Meloku's almost universal presence in decks capable of producing blue mana should be of no surprise. If you are green, you are probably going to have these cards, and if you are facing another green mage, you can expect to see them on the other side of the table. In order to win Legend fights, players are diversifying their lineups, playing one copy of this and one copy of that, or four solid North Trees so that they can hit early and recover against the other guy's best Craw Wurm ever.

Last of all is the specter of the best Equipment card since Skullclamp. "All the games that don't involve Umezawa's Jitte are fun," commented Brian Kibler. How different green players position their Jittes, handle the opponent's Jittes, or if they even play Jitte at all is another point of differentiation, a question handled via far different methods, deck to deck. 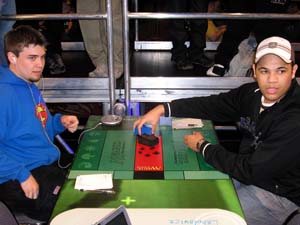 One of the more straightforward green decks of the tournament is being played by Osyp Lebedowicz and his formidable List cadre. Osyp's deck is blue-green-white and plays an unusual configuration of threats. Unlike many of the decks that we will highlight here, the deck runs a full compliment of Umezawa's Jittes and a Time of Need toolbox ranging from Hokori, Dust-Drinker to Patron of the Kitsune. The unique element of this deck, though, and the threat that other Green mages have to watch out for, is Yosei, the Morning Star. The White element of Osyp's deck gives him this powerful Dragon as well as a consistent threat that can fly over Kodama of the North Tree with a lower incidence of Legend Rule brawls.

World Champion Julien Nuijten has many cards in common with Osyp, including white's Final Judgment and a blue splash for Meloku the Clouded Mirror, but his core deck focus is quite different. Rather than an Umezawa's Jitte offense, Julien's deck boasts an exhaustion engine that can set up Cranial Extraction + Hana Kami via Gifts Ungiven and Soulless Revival. By playing Arcane cards and splicing Soulless Revival, Julien can strip down his opponent's hand and library … and repeat the process over and over again. In addition, his white splash lets Julien Gifts Ungiven into Ethereal Haze for a Haze + Hana Kami + Soulless Revival combination capable of shutting down creature damage indefinitely.

On the other end of the green spectrum are the Heartbeat of Spring decks played by champions like Itaru Ishida and Pierre Canali. At first blush, the symmetrical Heartbeat of Spring seems like a terrible card in a room full of green decks that can piggyback its extra mana for their own powerhouse bombs, but the Heartbeat players have tactics that help them to offset the potential negatives of the card. Most of the time, the Heartbeat player will wait until he has sufficient mana to run that namesake enchantment and a significant threat in the same turn. Itaru Ishida plays both Myojin of Seeing Winds and Myojin of Night's Reach alongside Soulless Revival in his list. When his Heartbeat of Spring comes down, the opponent is typically left with no hand as the Japanese superstar draws 10 cards off the top.

A radical departure for even the Heartbeat players is a deck being played by Rookie of the Year frontrunner Pierre Canali. Don't be surprised if you hear about one of the French players floating a ton of Heartbeat mana and then playing Sway of the Stars. That exorbitantly expensive sorcery acts as an Upheaval and follow-up in their deck. With just two mana in pool, the Sway players can enjoy a mana jump via Kodama's Reach or float eight or so mana to end up passing the turn with Yosei, the Morning Star staring across the table.

A big question for players coming into this tournament is how fast their decks can move. Clunky openings can spell doom against White Weenie and other aggressive decks. Because of this, you will see a disparate number of Sensei's Divining Tops through the green decks. Many players, including those commanding the ponderous Heartbeat of Spring or Cranial Extraction recursion decks, play the maximum number of Tops. These mages utilize the shuffles from Sakura-Tribe Elder, Kodama's Reach, and Time of Need to get fresh Sylvan Library looks every round with their popular one mana artifacts.

"I'm really comfortable with the power level of the card…" said Randy Buehler. "Except for all the shuffling. It really takes a lot of time off the clock." 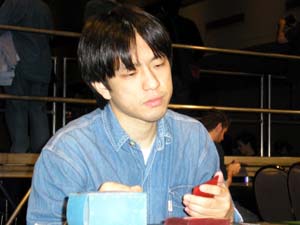 Time constraints, both real and in terms of board development against pressure, have made Sensei's Divining Top anything from an automatic four-of in green decks. Tsuyoshi Fujita, largely considered the world's leading deck designer, runs only two copies in his Legend-packed deck. Fujita distinguishes his Weapon of Choice as a beatdown deck instead of control … with his many Bandit Warlords searching up not just Umezawa's Jitte but Tatsumasa the Dragon Fang and Konda's Banner (a "Crusade" for Meloku's spawn), not to mention all kinds of giant Dragons, Moonfolk, and Snakes jockeying for inclusion, the Resident Genius has room for only two Tops.

Kibler plays none at all. "It's a question of deck space," says multiple Grand Prix-winning Dragonmaster. "The cards in the block are just so powerful that you need to react quickly and don't necessarily have time to use on the Top … but more than that, I just can't see running Sensei's Divining Top over Gifts Ungiven. If I'm in a stalemate, I can Gifts for Sakura-Tribe Elder, Seshiro, Sosuke's Summons, and anything and break through without significantly thinning the threat count of my deck. You just don't have room for Top and the Snake engine."

Along with keen deck design, this Pro Tour is going to be decided by knowledge of the format. As with Sensei's Divining Top, players are divided on the inclusion of Cranial Extraction in their green decks.

"Players do stupid things, and players miss," said Osyp Lebedowicz. "First round, I played out North Tree. My opponent had North Tree but wanted to set up the long game, so he Extracted me … for Extraction. Supposedly you win the control match by winning the fight over Extraction, but I don't play any and he missed. So I attacked him for six and played Yosei. Good game."

"Extraction is fine," retorts Kibler. "You shouldn't miss, at least after sideboards." In their match, Kibler Extracted Lebedowicz for Yosei early, taking two out of the Pro Tour-Venice Champion's hand, disrupting his trump. "Extraction doesn't affect the board and it doesn't dig you out of trouble, but it's fine and can be a strong sideboard card."

An even more skill-testing guess at the library comes in the form of Cranial Extraction's red equivalent. Fujita and many of the Japanese are packing Mindblaze. By checking out the opponent's graveyard, it is pretty easy to guess how many Sakura-Tribe Elders are in their libraries, making double Fireblast a very real possibility for the canny Japanese.

To sum up some of the core strategies that are defining the top tables, we have the ability to search out and accelerate mana (specifically basic lands), manipulating draws with Sensei's Divining Top, and coming out with powerful - usually Legendary - threats. Surprising everyone is a player doing all these things … except not with green.

Kai Budde came to Philadelphia with a black-white control deck using Journeyer's Kite to set up his Divining Tops and has been crushing the more expected green decks all day. With cards like Hero's Demise, he is matching the opponent's Time of Need and Legendary victory conditions, coming out himself with cards like Yukora, the Prisoner; few are the Legends that can match his Servant of Oni. Watching Kai play, I was startled at the speed and surety of the former champion's play, a possible sign of a return to his dominance in ages past.

"He's playing fast," observed Buehler. "He's tested and it shows. You can tell because he isn't improvising or relying on his former talent. Kai's back."

At a perfect 6-0 with a deck that is tearing up the expected field, the most decorated player in the history of the Pro Tour looks to be making a great run to Sunday -- but he'll have to make it through Saturday first.