The Flores File: Information and Perspiration

Day One of Pro Tour Atlanta 2005 was a battle of Sealed Decks, Saturday's competition was Team Rochester Draft, considered by many to be the most skill-testing format in all of tournament Magic. In Team Rochester, each of the three players on both squads drafts a deck for a single battle - a fight against the man (or in this year's tournament, one of two women) sitting directly across the table. 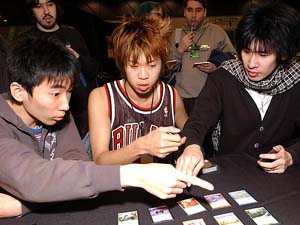 Oiso, Mori and Morita knew how to help each other out.

Team Rochester is a challenging format because it doesn't just ask a player to put together a great stack of 40 cards for himself, but to anticipate the strength of his deck against the one being simultaneously prepared by his opponent. It is not just about taking the best cards for one's own deck, but about watching what the opponent is taking. More than just worrying about one matchup, Team Rochester is very much a team effort. Not only are players asked to win to contribute to the team's success with a win, but to make sometimes self-sacrificing picks that help out a teammate instead of their own decks. Here are two great examples:

Reading the draft well enough to instruct picks like these requires in some cases a great deal of preparation. Early in the day, One Spin's Kenji Tsumura found himself on the wrong side of a blue-black vs. blue-white matchup. Traditionally, blue-white is at a disadvantage against blue-black. Both decks have control elements and evasion creatures, but blue-white has big problems with utility creatures whereas blue-black has legitimate removal in everything from Befoul to Horobi's Whisper.

Kenji drafted a Hankyu that murdered his opponent's blue-black. Almost every creature in the opponent's deck was 2/1 or thereabouts… he was never in it against what has been called the world's worst Viridian Longbow.

Friday we talked about how important it is to "track the green deck." Many of the game's top teams believe that figuring out where the opponents will put their green deck is the key to success in this format. That said, even among players on the same teams, what to do with that information is not always unanimous.

One question is who has the advantage between a green deck and black-red. Most players say that green has the advantage. Despite having access to the most removal of any color combination, black-red often has problems with the fat creatures in green.

"What do you do if they play a turn three 2/4?" asks Von Dutch's Jeroen Remie. When the opponents open well and have access to especially multiple Glacial Rays, there's nothing better to answer than a creature with a toughness greater than two. If the opponent isn't green-black, though, some teams try to set up this very black-red matchup. One theory is that when the opponent has giant bomb creatures like Kodama of the North Tree, black-red is the deck to draft into it because that deck can race with Nezumi Shortfang and other fast evasion creatures.

All of that said, most teams I talked to try to set up a green-on-green matchup.

"It's hard for green to beat other colors," said Osyp Lebedowicz of NFC. "White has tons of 1/4 and 2/4 creatures that are hard to bust through, and Split-Tail Miko and Waxmane Baku are impossible. Even Hundred-Talon Strike -- white's worst trick -- destroys green; you really want to get green-black against their green." 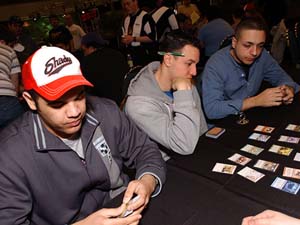 Osyp and his team NFC knew the power -- and limitations -- of drafting green.

Like Hankyu in blue-on-blue, Green has secret one-drops that the best-prepared teams know to take.

"Traproot Kami is insane in the green mirror," says Osyp. "It's like Kami of False Hope or even Call For Blood. These are good cards in their matchups that people don't take high enough. In the black-red mirror, you just want to trade your fatty for their fatty and then Call For Blood; the games aren't as quick as you'd think."

Speaking of cards that players get late, maybe the most interesting -- or most painful -- example on the day was Zach Parker's Reito Lantern. After the last pack, Parker's opponent, Steve Sadin, had picked up three Soratami Mindsweepers. Parker won the first game and Sadin decked him in the second. For Game 3, the baby-faced assassin brought in a 15th- pick Reito Lantern that he was just lucky to get.

Game 3 was an elegant dance with more relevant things going on than any other match in the room. Sadin was beaten down early and facing down a Genju of the Fields. Though Sadin had a Kiku, Night's Flower in play, that Legendary creature was of little use against the high-toughness Genju. Steve stabilized on 6 with a Shimmering Glasskite, but Parker set up an amazing defensive position with both Ghostly Prison and Honden of Cleansing Fire; Sadin created an impressive air force, but his beatdown was slow.

Late in the game, the first Mindsweeper showed up… but Parker had the Reito Lantern. Parker played with most of the rest of the game with no library -- yet he could dictate which card he drew every turn. Sadin also had perfect knowledge of Parker's draws.

Going long, Steve had to keep track of the position of the removal cards in Parker's library so that he could mill at the right times. Eventually the baby-faced assassin got a Human Assassin of his own and the new Legend Rule took out Sadin's Kiku, but the Swallowing Plague that could shut down his Mindsweepers was never seen again.

At the same time, both players were sculpting up damage-based kills, with Sadin poking away through Parker's Honden and Parker setting up an attack for the last six points.

Not surprisingly, the game ended in a draw. It was excruciating to watch, and both players had to keep notes the entire time to make sure they were accurately tracking life totals, card positions in Parker's library, and -- because the game went so long -- the possibility of either player decking.

From a general strategy and position standpoint, many teams believe that white should be played on the left. It is strongest in pack three, when cards like Waxmane Baku come from right to left. Black is most commonly paired with white, though blue-white and other color combinations will be seen there as well. On the flip side, One Spin made Top 4 by putting black-red in that same spot.

Just as Waxmane Baku headlines the best commons in white, black and red have a lot of incentive going left as well; on top of their removal count in especially the first pack of Champions of Kamigawa (read: Glacial Ray), Betrayers of Kamigawa provides removal that is not just lethal, but reusable.

You would think that with some teams putting black-red on the left, with others saying white is correct there, green-white would show up as an anti-strategy… but it just doesn't work. Green-white is only good if you have the tricks, and with one less pack of Champions of Kamigawa, there are fewer Blessed Breaths and Kodama's Mights to protect creatures and punch in. More importantly, in Team Rochester Draft, the opposing team can break up a green-white deck's tricks, and even if they fail, will always have perfect knowledge of what to play around.

At the end of the day, four teams moved on to compete in Sunday's elimination Top 4. The biggest surprise is We Add, a Last Chance Qualifier team that wasn't even invited to this Pro Tour 48 hours ago before they earned their Top 4 spot. Adam Chambers was most recently seen in the Top 4 of Grand Prix-Chicago as a member of Gindy's Sister's Fan Club and Andrew Pacifico is no stranger to Day 3 - this former Junior World Champion has played under the lights at U.S. Nationals.

Atlanta is a return to Day Three play for Benjamin Caumes of Les Baltringues de Ludipia as well. Ben was last seen in an epic battle with Jon Finkel in the Top 8 of Pro Tour-Yokohama. He will be joined Sunday by Nicolas Bornarel, a pro with whom he co-owns card shop Ludipia (the team's namesake), and Camille Fenet, a first time PT competitor. Camille can't really ask for a better debut.

The fan favorites going into Sunday are probably Nova, a squad that includes team star Dave Rood, reigning Player of the Year Gabriel Nassif, and Magic's original juggernaut, Gab Tsang. The most decorated competitors in Sunday's competition, every member of Nova has battled under the Day 3 lights. 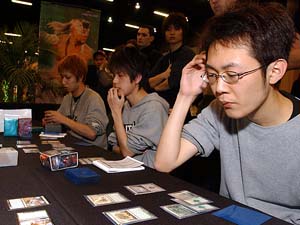 The play of One Spin shined on Saturday.

My personal favorite team to watch on the day has to be One Spin. Early Saturday, Tomohiro Kaji made a play to take a tough match that would have made Jon Finkel nod in appreciation.

Staring down Seshiro the Anointedand his kid Sosuke, Son of Seshiro as well as a Sakura-Tribe Springcaller, Tomohiro -- at just seven life -- looked to be on the wrong side of three big Ophidians. Tomohiro's opponent, Mike Clair, had served with both Legendary Snakes, and had only the Springcaller and three mana up when Kaji counterattacked with a 5/4 Feral Deceiver. Mike quickly blocked with his Springcaller, big as a house itself, which prompted Kaji to sacrifice his Burr Grafter to pump, returning a Kami of the Hunt.

Clair laid a Blessing of Leeches to regenerate and looked to be in prime position for a lethal attack the next turn. Kaji sat and stared at his cards for quite some time, prompting his opponent to call a judge to watch. The Japanese player then used all his mana -- including four counters from a Petalmane Baku to play the Kami and sacrifice everything for a non-lethal Devouring Greed, putting himself on 17… and knocking Clair all the way to 2 life.

The American came roaring with his Snakes the next turn, but with Kaji at 17 from the Devouring Greed, the attack was not lethal. Instead, the Blessing of Leeches ended its master on the next upkeep. Awesome, awesome .

If One Spin and the rest of the Top 4 teams can continue to wow us with play like this, Sunday's live Webcast should be one of the most exciting in recent memory. Join me and Randy Buehler at 8:45 a.m. ET to see all the action!