The Flores File: Our Most Diverse Day One Wrap-up Yet

probably heard this already, but the story of this tournament really is diversity. Depending on how you cut and slice and organize, Pro Tour-Honolulu is packing more than twenty distinct deck archetypes. It's easy to look at the colors in the abstract and say that black-white is the most common - black-white variants are making up maybe one in four decks this weekend - but it's the things that make the decks in Honolulu Standard distinct and interesting that is the real story.

Let's take that black-white "deck" to begin. The wingspan of the Orzhov seems to be the widest in the Honolulu Convention Center. Godless Shrine is played in the slowest control decks topping up on the seven mana Debtors' Knell (or Angel of Despair), and descends all the way down to the quick beats of two drops like Ravenous Rats and Dark Confidant. The reason that black-white is so populous, though, is that in between the quick beatdown deck and the slow one on the top end (in fact there are two or three decks packing Orzhov Signets and sevens), there are several decks in the middle.

Generally speaking, the most beatdown-oriented and the most control-oriented decks do not play Ghost Council of Orzhova. The quick decks usually run Umezawa's Jitte as their "four drop," and the expensive decks don't have the creatures to make the Ghost Council great. As good as a 4/4 for four mana is, without a team of creatures willing to sacrifice themselves to join the club, the Ghost Council is just harder to cast and less effective than, say, a Loxodon Hierarch.

Many black-white players, for example Franck Canu, chose to splash Green in their top end Orzhov decks. Unlike most decks with Green, Canu's runs some Putrefies in the side and some Hierarchs main, but it does not have the signature Green spells that we have come to know and expect from Kamigawa Block (Sakura-Tribe Elder, Kodama's Reach, etc.). Instead, his deck is very much a dedicated Orzhov… that happens to run a light splash via the superb Ravnica lands. Like most top end Orzhov decks, Franck's has tons of elimination. After trading a million cards, his innocuous green splash kicks in, and Vitu-Ghazi, the City-Tree plays finisher.

To power out all that flamboyance, the black-white decks need some serious acceleration. Instead of Sakura-Tribe Elder, they are almost universally packing Orzhov Signets. In addition, Orzhov Basilica is a much played if not universal land (to support his Green Splash, Canu also has a lone Golgari Rot Farm).

Quick quiz: What do Thief of Hope, Plagued Rusalka, and Ghost Council of Orzhova have in common? They are all Spirits! Taking a page out of Kamigawa Block, a small group of players including Benjamin Peebles-Mundy are running a black-white Tallowisp deck with an interesting array of bullets. Alongside all eight black and white Shoals, the black-white Wisp runs Pillory of the Sleepless, Enfeeblement, Indomitable Will, and Strands of Undeath. Though I saw him get the classic 2-for-1, Ben said that the Strands "was there to kill Meloku" alongside a Sickening Shoal.

After Godless Shrine, the most common dual land to be played across you is Stomping Ground. Given their legs by the return of Kird Ape in Ninth Edition and the Gruul, green-red and three- (or even four-) color Zoo decks have come out in force. Last year's Resident Genius, and probably the best deck designer in the world, Tsuyoshi Fujita came out with another of his aggressive Red Decks. This time the right formula was 20 creatures, 20 burn spells, and 20 lands. Eschewing flashy new threats like Rumbling Slum and Burning Tree Shaman, Tsuyoshi ran 16 one-drops and four copies of Watchwolf. Ignoring the debate over Volcanic Hammer and Lightning Helix, he just played them both! Support staff in other aggressive decks include Flames of the Blood Hand, Moldervine Cloak, and Bathe in Light! Like I said before: This format is all about diversity. City-Tree or no? Scab-Clan Mauler or no? Jitte main or side? In Honolulu, even if you play the same archetype more than once, don't expect every opponent to have all the same specific bench, or even philosophy on how he plans to beat you. 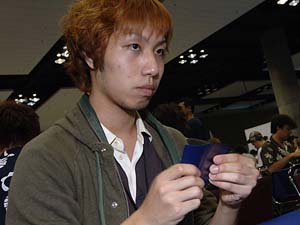 Saitou combined Zoo with Ninjas for a ticket to Day Two

A common sentiment among American pros is the fear that Japanese will "just take our two best decks and play them in one deck." One Spin's Tomoharu Saitou made an amazing hybridization… Zoo with Ninjas! Never before has Rumbling Slum crashed through the Red Zone alongside Ninja of the Deep Hours. Wondering what to do with that Birds of Paradise on turn two when you don't have a three drop? Why not make an Ophidian?

Unlike many three-color beatdown decks in this tournament, Saitou is playing his Jittes in the main. Instead of burn spells, he is using his Deep Hours-driven hand to play the eight-pack of Mana Leak and Remand. Finally, for maximum old school Erhnam-Geddon nostalgia, the versatile Saito "Sea Stompy" runs Thoughts of Ruin main. With Birds and Elves and a consistently full hand, he can take great advantage of the Red "Armageddon."

Anticipating a heavily control-oriented field, many top players have elected towards a Howling Mine/direct damage strategy. Level VI Mage Shuhei Nakamura is packing Kami of the Crescent Moon, Sudden Impact, and Twincast, the latter two combining for the old "take 16." The interesting thing about this archetype is how its players are anticipating beatdown. Some of them assume they will never beat a Zoo deck and ignore it; others are devoting all fifteen sideboard cards to attack decks, trying to turn a 1-9 matchup to maybe a 6-4, assuming they can carry the advantage against control through three games.

Little innovations make big splashes in known decks, too. Many Japanese players have added Selesnya Sanctuary to their Karsten Greater Gifts decks, for instance. Why would they want to do that? To discard Yosei on the second turn, of course! Disadvantage or no? 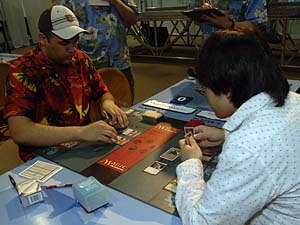 At the end of the day, there is only one undefeated 8-0 player. Defeating Franck Canu's three-color Orzhov at the 7-0 table is PT Venice Champion Osyp Lebedowicz. Osyp is playing a blue-red UrzaTron deck designed by yours truly with Andrew Cuneo and Josh Ravitz. Many deck designers prefer a relatively small, or at least somewhat fixed, metagame in which to build their decks. For example, back in Philadelphia last year, as much as players complained about Umezawa's Jitte, that Legendary Equipment provided a baseline. Decks played four copies, great designers like Tsuyoshi Fujita figured out how to win the Jitte war, and ultimately Gifts Ungiven decks were able to prey upon their aggressors.

The theory this time around is that if the format was really going to be 20 decks, there was no way we could reasonably approach it with an "anti-" strategy or metagame deck. With his UrzaTron deck, Osyp just wanted to throw a rock and hope that it would tear through any intervening paper, of course shattering any and all scissors in its path. Blue-red 'Tron has the most consistently powerful threats in the format, mana acceleration via Izzet Signet and its signature lands, and - unlike most of the other powerhouse decks with their Yoseis, Greater Goods, and Angels - the ability to say "No." As a stroke of good luck, Osyp's deck has many natural advantages against the popular decks in the field. Keiga is just bigger than Ghost Council of Orzhova, and Confiscate is a perfect catchall answer to Yosei, Greater Good, or just plain old basic Swamp.

It will be interesting to see how the Day Two metagame continues and elaborates on Friday's. Check back to MagicTheGathering.com on Saturday to see more Kird Apes bust through on the back of Bathe in Light, more Black and White cards fighting attrition wars, and more Blazes pointed via three land combinations!