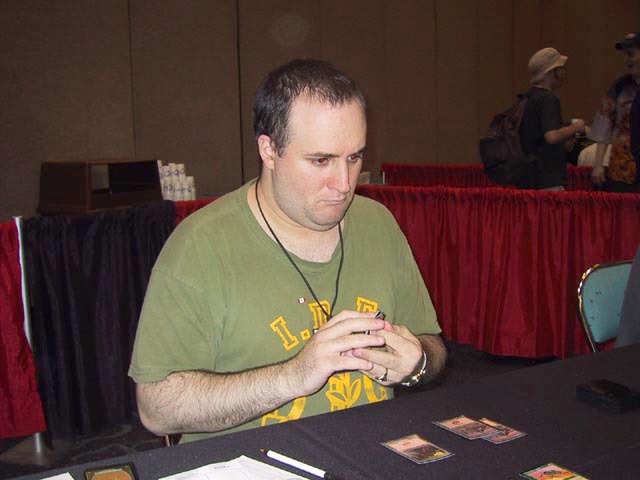 When I went to find Gary Wise for this interview, I saw him watching a Goodfellas DVD on a laptop as he waited for today's Top 8 to start. Wise, a Pro Tour player and regular Sideboard writer, has a Film degree from York University, so it was no surprise that he was watching movies to get prepared for the Top 8. Besides watching a classic film to get psyched, Wise had prepared in a strategic sense as well. Prior to today's Top 8, Wise spent two hours online talking strategy with Kai Budde and Felix "Flix" Shneiders. They went over his potential matchups today, and offered advice that would hopefully help Wise make the Canadian National team for the first time.

Wise's motivation for making the National team today is twofold. His father, Michael Wise, was a very successful Scrabble player, who had represented his country at the World Championships. Wise explained, "There's nothing that could make me prouder. My father was on the Canadian Scrabble team for the World Championships, and he was proud of that. I wanted to do the same and represent my country." However, this could very well be Wise's last chance to represent his homeland. "It's likely that I'm leaving Canada in September for London, so I might not get another chance." Wise will be moving into Hampton Court Palace, where he will be able to live and playtest with the Ronaldson brothers on a full-time basis.

This is the first year that Gary has made Top 8 in this tournament. He has won a Pro Tour and placed in the Top 8 of Worlds, but the National Championship is a tournament he has yet to conquer. Still, Wise didn't come into this weekend entirely dedicated. He has been testing for Worlds, and chose to not play his best deck. "Worlds is seventeen days away, and that's too close. Worlds is for so much money, and Canada is for so little that it's in my best interest to not play any tech I may have." Gary copied his deck from Daniel Zink's European Championship deck, but made a few changes for the current metagame. Specifically, he added black pain lands so that he would be able to hardcast Rebel Informer.