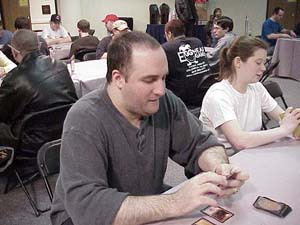 When I approached Gary Wise to ask him about his deck, it was he who asked me the first question, querying "Do you need another writer for tomorrow?" Gary felt his deck was pretty weak and didn't seem very optimistic about advancing to Day 2. His deck is still pretty interesting, though. Because he knew he had a below average card pool to work from, Wise decided to try to be aggressive and beat his opponents before they had time to draw their good cards.

"White/Black/Blue had the best cards, but it had no synergy and it was really slow. If I ran that deck, I'd have to play for the long game and in the long game I would lose to decks with higher card quality." So Gary left all of the following in his sideboard: Benalish Trapper, 2 x Samite Pilgrim, Sunscape Battlemage, Shackles, Aurora Griffin, Dismantling Blow, Sunscape Familiar, Benalish Lancer, Disciple of Kangee, Kangee, Tower Drake, Vodalian Serpent, Dralnu's Pet, Hunting Drake, Stand/Deliver, Wash Out, Exclude, Vodalian Zombie, Sleeper's Robe.

Wise also considered a red/black/blue build, but that deck was extremely creature light - once, again, no aggression and little chance of winning quickly. Instead, Wise ran the following deck with 15 creatures and only 16 land: 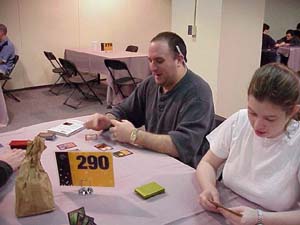 Wise explained that he doesn't usually play Geothermal Crevice, but this deck needs the potential burst of speed that it offers. Turn 4 Frenzied Tilling, for example, might buy him the time he needs to beat down. Wise also pointed to his "metagame creature" - Pygmy Kavu. This Kavu is only 1/2 for 4, but you get to draw a card for each black creature that your opponent controls. Gary expects 80% of his opponents to have black creatures so the Kavu and his two gating creatures to return it with could give him some nice card advantage.

With three byes already in his pocket, Wise just needs to find a way to squeeze three more wins out of the five rounds he'll be playing today. He thinks this build gives him the best chance to do that and it'll be interesting to see if he is right.