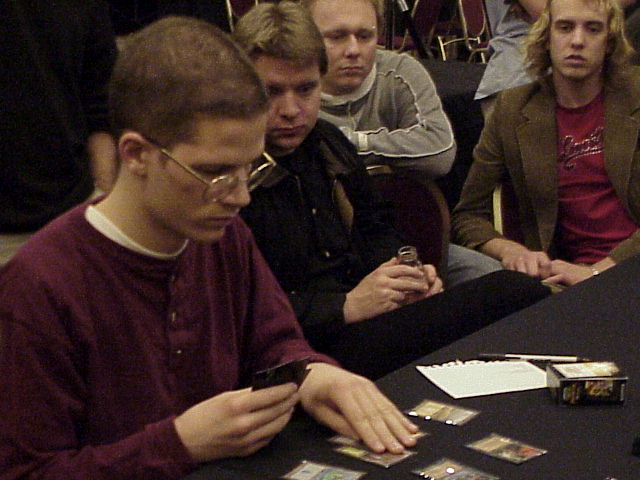 Andrew Cuneo is a credit to this great game.

Cuneo, who was a member of the 2nd-place "Car Acrobatic Team" from the most recent Pro Tour, was paired against German National Champion Andre Konstanczer in the 4th round of the Masters Gateway tournament. He started out game 2 well with Ordered Migration (for 3), Armadillo Cloak on a token, and then Sabertooth Nishoba. However, Konstanczer was coming back with Benalish Trapper and Rith, the Awakener. When Konstanczer played a Faerie Squadron (with kicker) and traded it for the Cloaked Bird token, Cuneo played Shackles on Rith and was forced to try to go the distance with his last remaining Bird token. Konstanczer was at 3 when he decided to use his Dismantling Blow to force Cuneo to pick up his Shackles.

With Rith now untapped, Konstanczer used his Trapper during his own main phase and tapped Cuneo's Bird token. The gathered crowd saw immediately that this mistake would cost Konstanczer the game. Cuneo was silent for about two seconds and then said "You know it's already tapped, right?" Cuneo voluntarily offered a take-back! He didn't want to win a game because his opponent was confused about the untapped status of a token! The crowd was absolutely stunned. Gab Tsang's jaw actually, physically dropped. Gary Wise commented to me "He's a better man than I am." After untapping his land and his Trapper, Konstanczer served with Rith, made a bunch of tokens, and still had the Trapper available to keep the Nishioba locked down.

Then, in the end, Cuneo won anyway and moved on to the semi-finals. Cuneo didn't even comment on it after the match, instead he was trying to figure out if he had made a mistake by not attacking with all his tokens on a previous turn. However, the crowd was big enough that tales of Cuneo's honor spread rapidly around the room.