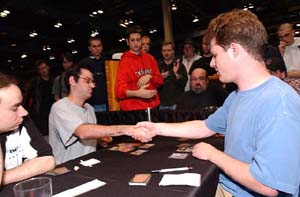 When I covered this draft pod I focused on Mike Turian, Craig Krempals and Osyp Lebedowicz—all three of them lost in the first round. Ben Rubin was all the way on the other side of table drafting under the Sideboard radar. Mentioned in the coverage was Osyp's pick of Sparksmith over Insurrection—a card that ended up in Allan Shuldiner's deck.

Both players show the pressure of this high stakes match. One player will advance to the 32-person Masters and be guaranteed a minimum payday of $2,000 with an upside of $25,000! The loser walks away with the rares they drafted and a story about "The one that got away". Ben was deliberately aloof, listening to his headphones after Allan suggested some kind of prize split for the loser of the match. Allan was visibly nervous. His nerves were probably justified, after all here he was playing Ben Rubin winner of two previous Masters and finalist of two Pro Tours and Allan will not play in his first Pro Tour until tomorrow morning.

After a deck check which both players passed the match finally began. Ben chose to send his initial set of seven cards back and kept the next six. Allan was satisfied with openers.

Ben made the first play of the game when he cast a Sparksmith. Allan promptly Shocked it at the end of Ben's turn and dropped a Glory Seeker. Ben answered with a Goblin Sledder but it wasn't going to be blocking the Glory Seeker and Allan drew first blood. He played one of his two bombs—Words of war and sent the turn back to Ben.

Ben could only crack back with the Sledder and aim a Lay Waste at one of Allan's three lands denying him any white mana. The Seeker and Allan's mana kept coming though. Ben's Sledder tried to keep up but it would need help so Ben played a Goblin Taskmaster. Allan chose not to draw for his turn and activated the Words of War to kill the Taskmaster. There was a brief rules discussion about whether or not Allan would get to draw a card if the Taskmaster was sacrificed to the Sledder. Allan did not get to draw and the Taskmaster was sacrificed and the Glory Seeker just kept serving it up two points at a time.

Ben kept coming back one point a turn with the Sledder and used Erratic Explosion to kill the 2/2 soldier. Allan cycled a Solar Blast to kill the Sledder and played a Daunting Defender when he untapped. Ben had nothing for the next few turns while Allan starting swinging for three at a time with his beefy cleric. In fact he cycled a Solar Blast doing one to Allan to find some kind of sustained threat.

Ben was able to play a Sparksmith and Pacifism on the same turn. Allan did not activate his Words of War and drew a card and Pacified the Husk and took Ben down to five life with his 3/3. From there it was just a matter of a chump block and a skipped card draw or tow and they were on to the second game.

Ben elected to lead off this game and both players were satisfied with their opening hands. Both players played a Goblin Taskmaster on the first turn and they traded on the next one. Ben had another Taskmaster and Allan played a pro black Disciple of Grace. Ben added a morph guy on his third turn and Allan had no third turn play.

Ben was looking for some more action cards and cycled Dirge of Dread to give his goblin fear and drew first blood taking Allan down to 16. Allan put out a Daru Cavalier and searched for and found another. Ben was forced to leave his creatures back in the face of the first striker and when Allan played the second one he was able to go on the offensive with the first one. Ben added the Goblin Sledder and on the next turn when the Cavalier swung, Ben put all three of his men in its path. Allan had the Piety Charm for his soldier but the Goblin Sledder made combat tricky. Allan assigned all four points of first strike to the morphed creature. After first strike resolved, Ben was able to use the Taskmaster's ability twice to kill the Cavalier. When the dust cleared, Allan played a morphed creature.

Ben tried to regroup with a Severed Legion but Allan could smell the $2,000 and sent all three of his men into the red zone. Ben blocked the morphed creature with his Severed Legion and the Disciple of Grace with his Goblin Sledder. Allan revealed his Daru Lancer and then things got a little dicey. Ben sacrificed both of his goblins to give his zombie +2/+2 but indicated that he was sac'ing the Sledder first. Allan wanted to know if he could then sacrifice his other goblin since the Taskmaster wasn't in play anymore. Eventually, the judge issued Ben a warning but he was allowed to sacrifice both creatures. Allan had another Piety Charm to save his Lancer and rendered the whole issue moot.

Ben finally killed the Lancer with a Cruel Revival on his next turn and retrieved his Legion, although he could not play it until the next turn. Allan kept swing with his Disciple and Daru Cavalier and played another mystery guy. Ben cast Aphetto Dredging on his next turn and retrieved all of his Goblins. He played a Sledder and a face down guy AKA Goblin Taskmaster but Allan just kept on swinging and Ben wasn't quite ready to block yet and his life total fell to nine.

Ben reinforced his board with a Severed Legion and a Goblin Taskmaster and had no cards in hand when he sent the turn back to Allan. Allan kept attacking to the audible pleasure of the small cheering section that had gathered to watch him play for the opportunity to play in a Masters event before he ever played a single match at a Pro Tour. Ben blocked the mystery guy with his legion, the Cavalier with his not so mysterious guy. After first strike went on the stack, Ben sacrificed his face up Taskmaster to give his face down one +1/+1. Before regular damage went on the stack, Allan cast Inspirit on his morph and the Cavalier and the Severed Legion went to the bin. During Allan's EOT Ben flipped his Taskmaster up but forgot that it was a 3/3 with 2 points of damage on it and that when it was face up it would only be a 2/2 and it promptly joined the Severed Legion in the graveyard.

There were a few more turns but the game was pretty much over and Allan "David" Shuldiner defeated Ben "Goliath" Rubin and was one of four players to advance to the 32-person Masters tournament with a guaranteed minimum payday of $2,000. I asked Allan if the Insurrection played a significant role and he told me that he never cast it once and actually sided it out of his deck against Osyp and Ben because their decks were too fast.