As Illuminati sat down for the final draft of the Masters Gateway Alex Shvarstman commented that his team has been hunting the elusive Team Masters invite for the last two years only to have it jump out of their sights at the last possible moment. Two years ago Alex, Justin Gary, and Zvi Mowshowitz lost in the Finals of Pro Tour New York and they lost in the finals of Grand Prix New Jersey last June.

Standing in their way is Team Outland 2 consisting of Lovre Crnobori, Oyvind Odegaard, and Endre Skejetne. They are hoping for an Outland sweep in the Gateway with their predecessors facing off against Team Shop Fireball one table over.

Iluminati won the die roll and elected to open first—willing to throw away early picks to allow their opponents settle into their colors first and then implement reactive strategies. Zvi (Seat B) and Alex (Seat C) took Pacifism and Stag Beetle—respectively—giving Outland a generous selection of red and black cards. Lovre (Seat A) took a Cabal Archon hoping for the cleric deck. Endre (Seat B) was more than happy to take Pinpoint Avalanche and leave Solar Blast for a tickled Oyvind. Justin (Seat A) got a couple of expensive soldiers on the wheel in Grassland Crusader and Crowd Favorites.

Alex opened a Sparksmith and wisely took it. Lovre continued to show clerics and took an unusually early Boneknitter. Endre followed up with more removal and took an Erratic Explosion while Oyvind nabbed a Snarling Undorak. Justin took a Biologist and Zvi wheeled a Wretched Anurid and Spined Basher.

A number of players qualified for the Masters were scouting the potential competition. Marco Blume and Bob Maher Jr. were both audibly surprised that Illuminati allowed Outland to set up two red drafters with the first pack. When Endre opened Riptide Shapeshifter to follow up last pack's Butcher Orgg Bob groaned, "It's like watching a car crash!" Oyvind grabbed a Prowling Pangolin considering R/B. Justin continued to dabble with blue and took Ascending Aven. Weathered Wayfarer found its way to the top of Zvi's pile and Alex supported Wirewood Pride and Lovre wheeled a Choking Tethers and Barren Moor.

Oyvind made the most of his team's one pick with Venomspout Brackus. Justin settled into U/R and greedily snapped up a Lavamancer's Skills. Gangrenous Goliath was snapped up by Zvi and Alex got a Treespring Lorian. Lovre got a Dive Bomber and Endre wheeled a Skirk Commando and Sunfire Balm.

Justin picked up the other staple card for U/R—Mistform Wall giving Zvi a Cruel Revival and Alex a Shock. Lovre got a Gustcloak Harrier and Endre a Riptide Replicator. Oyvind wheeled an Ironfist Crusher and a Dirge of Dread.

As the first round of packs came to a conclusion all of the players were settling into their colors. Justin was clearly U/R with the most important component needed for the archetype. Zvi was shaping up B/W and Alex looked to be G/R. Lovre had been B/W clerics from his first pick, Endre was R/X possibly U/R as well, and Oyvind was shaping up to be either G/R or B/R.

Justin kicked things off in the other direction with his second Ascending Aven leaving an Akroma's Vengeance. Oyvind took a Krosan Tusker and his teammates followed with Embermage Goblin and Lovre snatched the Onslaught block Wrath.

Outland got their second "Wrath" when Oyvind opened a Slice and Dice in the next pack giving Insurrection to his red teammate. Lovre contented himself with 1 for 1 removal with a Swat. Alex seemed happy with Barkhide Mauler and Zvi took a Festering Goblin and Justin got a Mistform Shrieker.

Sparksmith added to an impressive collection of cards in front of Endre and Lovre bolstered his clerics with a Doubtless One. Alex happily grabbed a Tribal Unity and Zvi took a Glory Seeker—he had a number of late pick Piety Charms at this point—while Justin took Charging Slateback.

Whatever credibility Outland had built up with Masters players went out the window with their last open in Onslaught. Lovre took a Tribal Golem over Slice and Dice—a mistake that could push Justin's deck over the top. Alex took another Barkhide Mauler and Zvi took a Buzzard leaving the unexpected 'Wrath" to a beaming Justin.

Alex opened a less than spectacular Goblin Sledder giving Zvi a more impressive Daru Lancer and Justin a solid Shock. Symbiotic Elf, Wretched Anurid, and Daru Healer were the next underwhelming picks in the pack.

Zvi opened the last Onslaught pack to find Improvised Armor for his deck and the dragon-esque Mistform Skyreaver. Outland picked up Mauler, Seahawk (#2) and a Buzzard. Alex took a Leery Fogbeast and Zvi managed to get his third Piety Charm with the penultimate pick going into Legions.

Zvi was looking at Swooping Talon until his teammate directed his attention to the Skinthinner up and to the left. Alex took a Stonewood Invoker and Lovre took the 2/6 provokers. Endre took a Weaver of Lies and Oyvind defensively drafted a Seaswift. Justin grabbed a Warped Researcher and somehow Zvi wheeled Deftblade Elite and Lowland Tracker very late.

The draft settled in along tribal lines. Alex took a Patron of the Wild and Lovre grabbed a Noxious Ghoul and Endre took an Echo Tracer. Oyvind blocked a Wingbeat Warrior but Justin picked up a Keeneye Aven. Zvi wheeled an Aven Warhawk and Deftblade Elite.

Lovre's cleric deck started morphing into a zombie deck with the addition of Graveborn Muse. Skirk Marauder went to the top of Endre's stack and Oyvind grabbed a match-up critical Frenetic Raptor. Justin's deck was rounding into final shape with the addition to a Seaswift. Zvi grabbed the evasive Sootfeather Flock and Alex grabbed a Brontherium and another Stonewood Invoker.

Endre picked up his second Skirk Marauder and Oyvind picked up Emperial Hellkite. Justin picked up a Glintwing Invoker that was unlikely to make the deck and Zvi found a potentially huge Daru Stinger. Alex took a Skirk Outrider and Lovre defensively drafted a Needleshot Gourna after taking a Corpse Harvester to the disbelief of Bob Maher and Neil Reeves.

Needleshot Gourna for Oyvind left a Mistform Ultimus for Justin, another Stinger for Zvi and a Hundroog for Alex. Vile Deacon and Flamwave Invoker rounded out Outlands's first set of picks in the next to last pack. 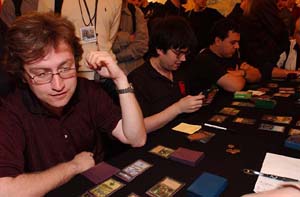 Justin finished very strong with an Echo Tracer and Zvi grabbed to Aven Redeemer. Alex sighed audibly as he picked a Timberwatch Elf with his last chance for this round. Hollow Specter made it all the way to Oyvind with a Whipgrass Entangler and Willbender going in the preceding picks to his mates.

I asked each player about how they felt about the match ups and Zvi was predictably excited. "They didn't realize I was generating a soldier deck in the third pack!" Zvi was spreading out his triple Deftblade Elite, triple Piety Charm, and double Daru Stinger deck.

Justin: "I feel good overall. I am deathly afraid of his Whipgrass Entangler—I'm tempted to splash for this Misery Charm. He also has a Vile Deacon and of course a Vengeance—which I can play around."

Endre: "I have a lot of good cards but the match-up is not a good one for me. I need to survive the early game—black is the best color against U/R especially Wretched Anurid and small soldiers. I was able to lower my curve in the third pack when I saw what he was doing."

Lovre: "I have a small edge... I have Vengenance but he has Slice and Dice. Dredging and Graveborn Muse should give me some edge—"

Oyvind interrupts: "HE HAS SKILLS!!! He has Lavamancer's Skills which should be your top worry!"

Oyvind: "My match-up is a mirror so...The best cards in his deck are Timberwatch Elves, Wellwisher, Sparksmith, and Stag Beetle. I have larger beasts so I think the game will stall out and whoever draws the gamebreaking cards will win."