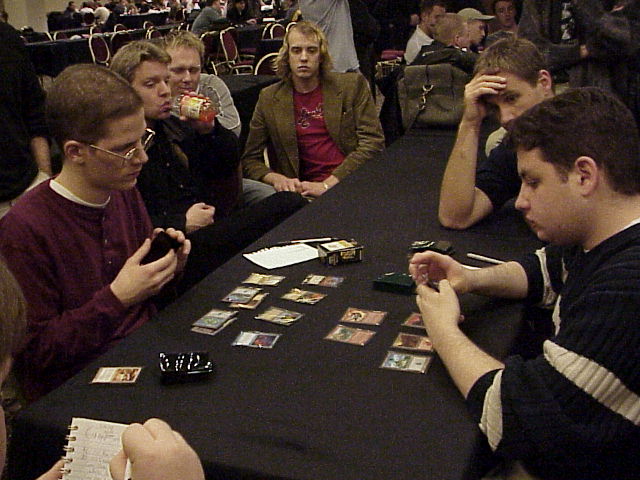 Pittsburgh playground legend Andrew Cuneo has finally broken onto the Pro Tour. After helping drive the Car Acrobatic Team to a second place finish at the most recent Pro Tour, Cuneo won five matches in the Masters Gateway and landed himself a match against Dan O'Mahoney-Schwartz with the winner advancing to the $150,000 Masters Series event. Dan OMS has been putting up some good Grand Prix results in recent months, out-performing his younger brother Steve. Dan is most famous, of course, for being one third of Team Antarctica, one of the best teams in the game.

Cuneo played out a pair of "tappers" early in game 1 - Thornscape Apprentice and Stormscape Apprentice. OMS stumbled out of the gate with a turn 3 Viashino Grappler but nothing else on turn 4 or 5. Cuneo then punished him by casting Global Ruin, destroying two of Dan's 4 lands and ensuring that OMS would never be able to play out his hand. When Cuneo played Power Armor, OMS drew one more card and then just scooped.

It was Cuneo's turn to have a bad draw in game 2. He mulliganed once and then kept 4 land, a Benalish Herald, and a Sabertooth Nishoba. Cuneo drew nothing but land during his first 6 draw phases and those two spells just weren't enough to hold off a pair of Viashino Grapplers and a pair of Duskwalkers.

The third game was pretty simple: Cuneo played an Obsidian Acolyte and then a Benalish Heralds. On his next turn Cuneo enchanted the Heralds with Armadillo Cloak and with the Acolyte protecting them from any black spells, the Cloaked Heralds went all the way. Interestingly, at the same time on an adjacent table, Jelger Wiegersma was also advancing to the Masters with Armadillo Cloak on his own Benalish Heralds, ending Franck Canu's dreams of back-to-back Gateway victories.