After the cut to Top 16 in the Masters Gateway, the players were divided into two draft pods of eight. The winner of each pod would get a precious slot for the Masters tournament, and after two rounds of play, Jelger Wiegersma from Holland and Franck Canu from France met in the finals of one of the pods. Wiegersma has been to a couple of Pro Tours, and his most notable performance is finishing 10th in last year's Pro Tour: Chicago. Canu is one of the French veterans. He has two Grand Prix Top 4s from Copenhagen and Tours, he was the runner-up in the 2000 French Nationals and he finished 31st at 1999 Pro Tour Los Angeles. Canu also qualified for the very first Masters Series by winning the Gateway tournament in New York, and looked to repeat the success.

Wiegersma won the coin toss and chose to play. He had drafted a strong, aggressive white, blue and green deck with flyers, tappers, two Armadillo Cloaks and some tricks. Canu was playing a green, red and black deck with a few bombs - Darigaaz, the Igniter, Meteor Storm and Thunderscape Master. But the Dutchman got a pretty good start. His opening hand contained four lands and a few creatures, and he got out a turn one Stormscape Apprentice.

Canu had to mulligan after getting an opening hand with two Forests and no green spells except for a Fires of Yavimaya. He then kept his second hand that held a Mountain, a Forest and a Quirion Elves for mana. Canu dropped a Mountain, and then he let Wiegersma play again.

Wiegersma attacked with his Apprentice and cast another tapper, a Benalish Trapper. After Canu had played another land, he attacked again with his two tappers. Canu got out his first creature, a Slimy Kavu, and then Wiegersma cast a Rampant Elephant. Unfortunately, the Frenchman got out a Kavu Runner, and that stopped Wiegersma's attack for a little while. 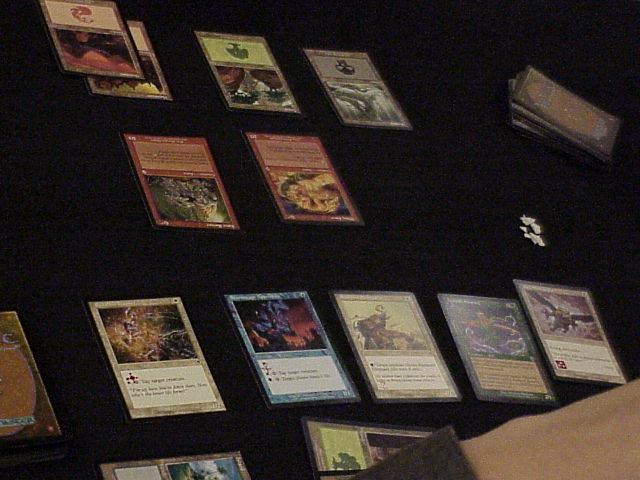 However, the Dutchman had more threats. A Razorfoot Griffin and a Quirion Sentinel came into play on his side of the table, and Canu had to get out some blockers, so he dropped a Quirion Elves calling blue, a Nightscape Apprentice and a Thornscape Apprentice. The two 1/1 creatures traded for the Elephant after Wiegersma activated the Elephant's ability, and the Griffin started hitting Canu for two. So Canu chose not to hold back, and he started attacking with his Slimy Kavu and the Kavu Runner to deal some damage of his own. The Frenchman also Tribal Flamed the Benalish Trapper, leaving Wiegersma with only one tapper, the Apprentice.

Wiegersma's Griffin and Sentinel took Canu down to eleven life, and the Dutchman also cast a Dream Thrush to add to his offense in the air. He held back the Stormscape Apprentice to tap down the Kavu Runner so that he wouldn't take too much damage, and thus Canu's offense was reduced to the Slimy Kavu. And when Wiegersma topdecked an Armadillo Cloak and cloaked up the Sentinel, the Frenchman scooped.

Wiegersma sideboarded two Crimson Acolytes while Canu felt he needed some more removal and added a Cursed Flesh to his deck. The Frenchman then chose to play, and his opening hand was better than the opening hand he got in the first game. This time he had three lands and a couple of creatures. Wiegersma kept his hand as well. He had two lands, an Acolyte and both his Armadillo Cloaks. However, he didn't have any Forests.

It didn't really matter too much what he had in his opening hand though. Canu dropped a Mountain and two Swamps, and then he missed three land drops before finally drawing a Forest. Meanwhile, Jelger cast a turn three Benalish Trapper, a turn four Crimson Acolyte, a turn five Benalish Heralds and a turn six Rampant Elephant, and Canu was down to 16 when he cast a Fertile Ground and then a Yavimaya Barbarian he had been holding from the start of the game. The only spell he'd cast before that was an Exotic Curse that took care of the Trapper.

Wiegersma didn't really care though. He attacked with his Acolyte, Heralds and Elephant, and then he cast another Rampant Elephant. But Canu drew another land and dropped a Serpentine Kavu that stopped the onslaught, at least for a while.

In spite of his pretty strong start, Wiegersma really needed green mana to activate the Elephants' abilities and to cast his two Armadillo Cloaks. He didn't drop anything during his turn eight but he topdecked a Fact or Fiction. So, after Canu had played another land and a Dromar's Attendant, he cast the Fact or Fiction, flipping over two Forests, a Plains, a Razorfoot Griffin and a Sunscape Master.

Canu chose to put the three lands in one pile and the two creatures in the other, and naturally, Wiegersma picked the lands. He then untapped and played a forest, which gave him several options. Wiegersma chose to play a Quirion Sentinel, and with the extra green mana, he finally got to cast one of the Armadillo Cloaks on the Benalish Heralds.

Faced with 4/6 Spirit Linked Heralds, things looked bad for Canu. The following attack took him down to seven life, while Wiegersma went back up to 20 life. Canu then sighed and dropped a Thunderscape Master and a Quirion Elves, calling black. Wiegersma didn't really like the Master. So during his turn, he played the second Forest. He then activated the ability of both the Elephants, forcing Canu's Thunderscape Master and Serpentine Kavu to block. The slight mistake of him not activating one Elephant twice to save one of them didn't matter. Canu went down to three life and Wiegersma then dropped a Glimmering Angel, leaving one blue mana open to defend it. 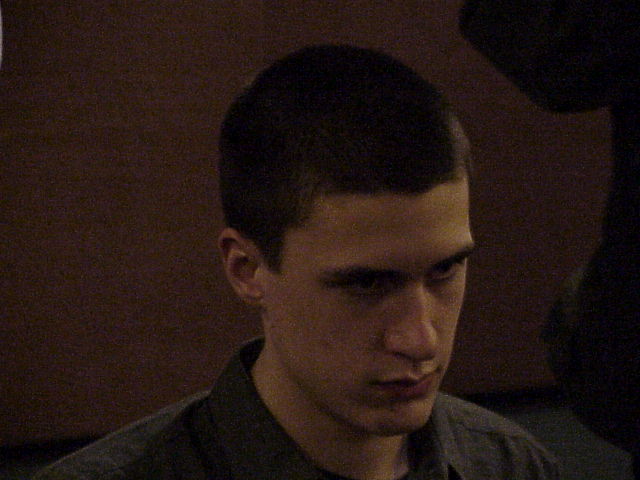 Canu couldn't do much but attack with his Serpentine Kavu. The Frenchman held back the rest of his creatures to block, but Wiegersma simply cloaked up the Glimmering Angel to win a slot in the second ever Masters Series.