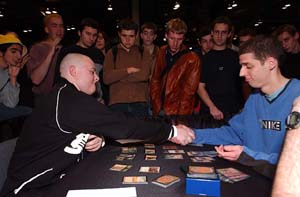 At least two thousand dollars hangs on the outcome of this match. To the winner, a spot on the Masters Series. To the loser, the bitter disappointment of having come so close. David Brucker is no stranger to high-level competition. This year he brawled the European Championships and took the title. Across from him, perhaps subdued by the import of his situation, is nefarious cueball Peter Szigeti.

It was a slow start from Szigeti, including the always-terrible "No play on turn three". He did have double Cruel Revival, so his hand was not without features. Brucker curved out with a morph and Snarling Undorak. Harsh Mercy removed the face-down creature, but it was replaced with Leery Fogbeast. Cruel Revival took out the Undorak, but Szigeti had to eat some damage first.

Brucker untapped and played Centaur Glade. All Szigeti had to say was "I can't win this game." He fought gamely, though, first with Grassland Crusader and then Gustcloak Skirmisher and Shared Triumph naming soldiers. It was a race he could win if he could just find a few more defenders. Brucker made a centaur, and then cast Silklash Spider, hoping to end Szigeti right there. Szigeti dropped the second Revival.

It was still tight, but Brucker wasn't out of tricks. Next up was Gratuitous Violence. Now the Crusader was no defense against centaur tokens. With his board disappearing and the race slipping away from him, Szigeti bolstered his defenses as best he could. Brucker's next play was a land.

Szigeti drew his card, a plains, and packed it up.

The second game was not pretty for Brucker. It started off right, with Brucker dropping Sparksmith, but he didn't have a second goblin to take care of Szigeti's morph, and had to content himself with playing one of his own. They traded hits, but Brucker had no play on his four mana, and held his dudes back. Szigeti made a second morph

Brucker attacked. Szigeti let it by, and Brucker had nothing better to do than decloak Charging Slateback. That earned a Cruel Revival and four points of beats. Six mana and still Brucker had no play. It didn't take more than two turns from there.

The two matched early plays. Wirewood Herald for Shepherd of Rot, morph for morph, but then Brucker tipped the balance with Lavamancer's Skill on his Herald. Szigeti Blackmailed him for his whole hand. It was good timing. The Centaur Glade in it would have hit the following turn. Szigeti even had Cruel Revival ready for the Silklash Spider. He made a morph in the meantime.

After losing his Spider Brucker was convinced to hold back. Szigeti made a Grassland Crusader while Brucker morphed his Gourna. Unfortunately, he had no play on his next turn. Szigeti beat in with one of his morphs. The Gourna blocked. Szigeti turned over Daru Lancer and pumped with his Crusader.

Brucker was ready, sort of. The last two cards in his hand were Vitality Charms, which saved the Gourna and killed the Lancer, thanks to Sparksmith. However, Szigeti was not out of cards, and Shared Triumph for soldiers meant he could dive in with his face-down Gravel Slinger. Brucker let it by, and took four. While Brucker drew lands, Szigeti drew Screeching Buzzard and then Doomed Necromancer. The Herald took one for the team but could only find a Savage. Charging Slateback got him a card but no defense. Soon Szigeti was coming in for lethal damage.